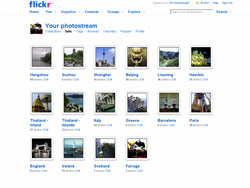 I was tired of being confined to a limited number of sets (categories for your pictures), and of being reminded that my account had reached the maximum number of photos that could be displayed.

When I first got a flickr account I didn’t buy into the whole “pro” thing, as even at $30/yr. I thought it was a bit steep. I had always assumed that some mimic service would come along and offer the same thing for free. And though some have, none offer the features and communal aspects of Flickr.

So, I’ll be hosting more and more of my photos there. And I’m also working at integrating this rather cool WordPress Flickr plugin into the site to create photo albums on here.

It also paves the way for me justifying buying a new DSLR. I mean hell, I’ve already got the pro Flickr account…