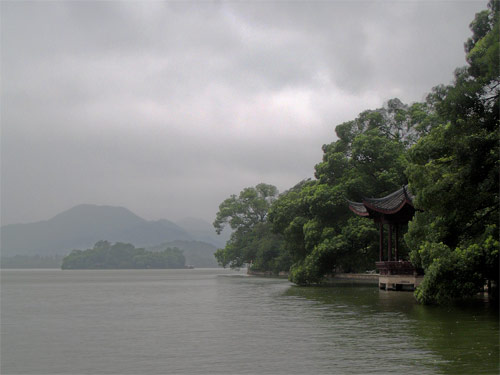 Last weekend Maggie and I finally got down to Hangzhou. We’d been meaning to visit the place (a mere 2 hour bus ride from Suzhou) since moving here two years ago, but it always seemed to fall by the wayside.

With work keeping us both insanely busy, it’s been a little too easy to forget that we really do need to make time and get out and do somethings just her and I. The heat was repressive, but the break from Suzhou and work was nice. 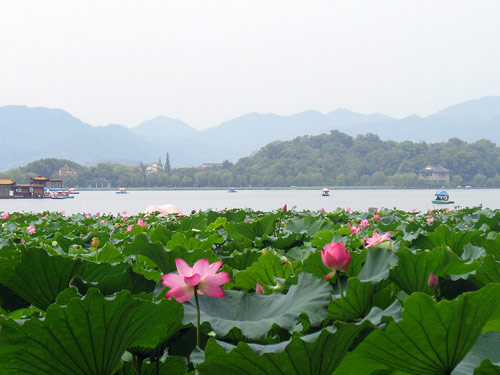 Hangzhou, for anyone that doesn’t know the place, is the capital of Zhejiang province, and shares a tight relationship with Suzhou – the combined area often being called SuHang due to an ancient Chinese saying: ä¸Šæœ‰å¤©å ‚, ä¸‹æœ‰è‹æ­ / shÃ ng yÇ’u tiÄntÃ¡ng, xiÃ  yÇ’u sÅ«hÃ¡ng – which translates to “above, there is heaven; below, there is Suzhou and Hangzhou.”

The city is really famous for two things – it is the former capital of the Southern Song Dynasty (1127â€“1279 AD) and it features XÄ« HÃº. Though there are no shortage of “West Lakes” in China – Hangzhou’s is generally considered the original and most famous.

We stayed at a decent hotel only 100m away from the north-edge of the lake called, appropriately enough, the Lakeside Hotel Hangzhou. Due to some writing I did for the Ctrip-affiliated ChinaTravel.net a while back I was stacked with Ctrip points, and so the hotel was comped – always a nice thing. 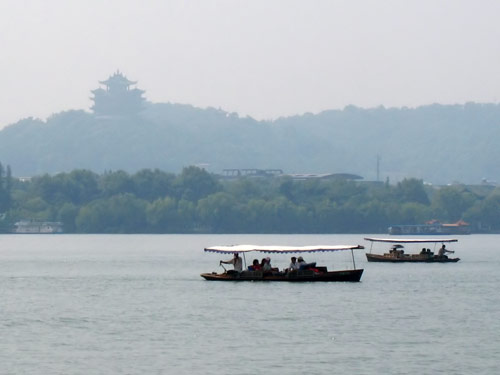 Initially I had wanted to try and find a hotel that actual gave nice views of the lake, but despite the names and monikers of Hangzhou’s numerous hotels, we couldn’t find one that presented anything more than a distant view.

With only a couple days in Hangzhou, we created a rather ambitious agenda that was quickly squashed by the oppressive heat and humidity. I don’t think it was any hotter in Hangzhou than it is in Suzhou, but I’m not exactly hiking around here.

Friday night we did little but hit up a rather crummy restaurant advertising local Hangzhou-style food. We ordered Dongpo Rou, what amounts to a richly marinated hunk of pork (skin, fat and all); and Sour Xi Hu Fish, a saucy dish made from a “freshly caught” West Lake carp (read: bony as hell). 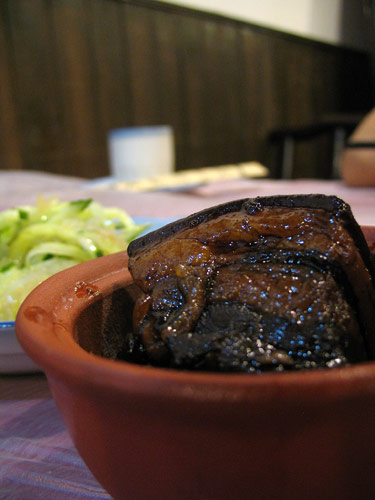 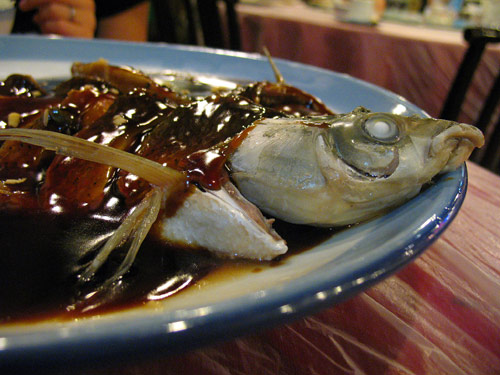 The pork was great, but the fish did little to impress me. Figuring it made sense to wash it down with the local brew, we grabbed a couple bottles of Xi Hu’s finest. When they say they make it from West Lake’s water, they’re not lying – with a 2% alcohol content, that’s about all that’s in it.

After dinner we took a brief walk over to the Bai Causeway, a pedestrian road that runs across the lake’s north-end. Despite being crowded with fellow tourists, the lake at night offered some nice views and moments of tranquility. 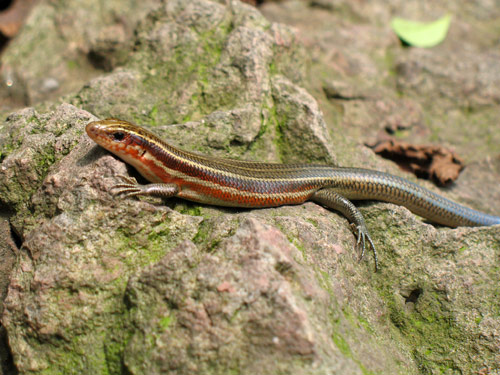 The next morning we got up at a decent time and decided to head up Precious Stone Hill to Baochu Pagoda – the heat made going slow and sweaty, but the top of the hill offered some nice views of the area, and the chance to see some Hangzhou fauna in the form of some cool blue-tailed lizards.

From the pagoda we hiked west along the hill in an attempt to find the Yellow Dragon Cave/Fountain – which after some trekking we discovered on the north face of the hill – down about a million steps and through a maze of stone – similar to the Lion’s Grove garden here in Suzhou – but in a more wilderness-y setting.

The actual fountain is set in your standard Chinese temple/garden deal. A koi pond, some gazebos, a bunch of touch-it-and-be-lucky statues and a shop or two selling overpriced fake silk and paper fans. Still, for 15 RMB, it was decent.

Our Hangzhou map led me to believe that the Yellow Dragon Cave/fountain would exit out on the south side of the hill, near the tomb of legendary Chinese hero Yue Fei. I was wrong, and after getting a bit of direction from a grumpy magazine salesman, we headed back to the hotel to ring out our clothes and suck in some air con.

After a bit of a nap we headed back onto the Bai Causeway to see about getting on a boat tour of the lake. Upon reaching the far end of the causeway the sky opened up and dumped Biblical amounts of rain on us. They say that Hangzhou/Xi Hu is more beautiful in the rain, and I’m guessing that they never had to walk around in wet shoes for the duration of their stay in the city. Fortunately umbrellas are everywhere in Hangzhou (I learned later that virtually all umbrellas in China are made in Hangzhou) so we scooped up a couple and made for our hotel.

For dinner we found a decent Brazilian BBQ spot in the north end of the city – there’s no better way to get a gut-bursting amount of meat and an all-you-can-eat buffet for 60 RMB. It’s one of the anomalies of Suzhou that it doesn’t have more Brazilian BBQ places. Dalian was loaded with them, but with the exception of one rather overly priced place right downtown, Suzhou’s devoid of them. 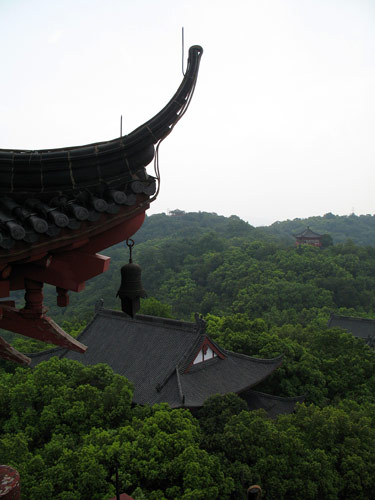 Though I had hoped to get out to Lingyin Temple and its nearby caves full of Buddhist statues, heat and time persuaded me to leave it for another trip to the city.

Instead we (once again) returned to the Bai Causeway in hopes of renting a little boat, or getting on a boat tour. The hordes of people deterred us, and instead we hopped in a cab and headed to Wushan, a large hill on the east side of the lake that features a massive temple-like structure on its peak. 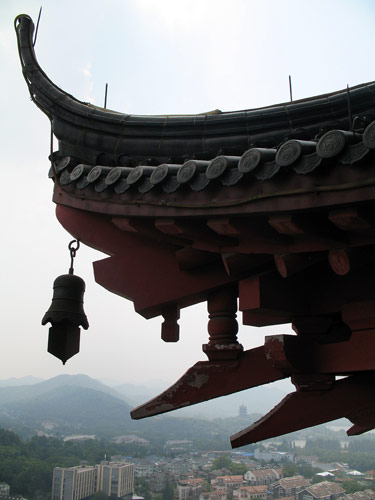 The temple, called Chenghuang, is an impressive building that goes five stories past the highest part of the hill, giving an amazing panorama of Hangzhou. Inside the building (it looks like a temple – but has elevators and Western toilets) a bit of Hangzhou history is offered.

The actual temple is a less impressive structure just beside the massive building. Despite there not being much in the way of sights to see up Wushan, it was one of the more tranquil parts of our trip. Shady wooded areas and a distinct lack of tourists makes the place a quiet and peaceful refuge from the heat and bustle down below. 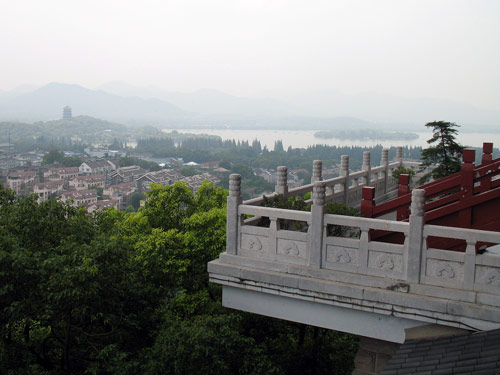 At the base of the hill lays Fanggu Jie, one of Hangzhou’s numerous pedestrian streets littered with souvenir shops, tea houses and restaurants of all kinds. We grabbed a bite to eat, bought some souvenirs and then headed back to the hotel to grab our bag and head to the bus station.

Though we didn’t get half as much done as we had originally planned, we accomplished our primary objective – just getting away and relaxing for a couple days. Still, it was nice to get home – it was the first time we had left our puppy, Addie, home alone (with supervision, of course) and nary a couple hours would go by without Maggie or myself wondering if she was alright.

A note about travel between Suzhou and Hangzhou

If you happen to be travelling to Hangzhou from Suzhou, or vice versa, take a pass on the D-trains. Though China’s ultra-fast D-trains are fast and comfortable, there is no direct line between Suzhou and Hangzhou – forcing the train to first go to Shanghai. Because of this tickets are harder to get (we tried to get a ticket for two days later but they were sold out) and the trip still takes 2.5-3 hours.

The bus, on the other hand, leaves every 20 minutes or so, is decently comfortable and only takes 2 hours. The best bus stations to depart from are the East Bus Station (Hangzhou->Suzhou) and the South Bus Station (Suzhou->Hangzhou).