A lot of memories are sought in an active way; through vacations, birthday parties, anniversaries and the like. Many more are created completely unknowingly at the time and are only significant in hindsight; a random meeting with someone who becomes important in your life, an impromptu drive down a country road that fruits a beautiful picture, the plethora of memories earned through parenting.

Typhoon Rammasun and this past weekend fit firmly into a third type of memory â€“ one that sneaks up on you, but the moment it arrives you know it’ll be forever with you. Standing surrounded by fallen trees and flooded roads — with no power or water, no cell phone or Internet service — I wasn’t certain of a lot of things, I was sure though that I would never forget this.

Since moving to Haikou a little more than 3 years ago, we’ve experienced our fair share of typhoons. They usually hit and pass without much more than a bit of wind and rain. So benign have they been that the announcement another one is coming is rarely more than a mental note to eat in that night, maybe bring in the potted plants.

Thus when friends started talking about the approaching Rammasun, I didn’t pay it much mind. As it got closer, however, I started to see notices that it would make landfall almost directly on top of us. Worse, after first plowing through the Philippines, as most our typhoons do, it used the open water between to gather strength â€“ upgrading it to a Category 4 Super Typhoon.

And so it was that it arrived Friday afternoon. Still only touching us with its edges, by 3pm the typhoon was already pushing more wind and rain past our windows than typical tropical storms. By 5:30pm it was loud and proud, routinely knocking power out; and by 7pm, as darkness descended, it sounded like what I imagine being directly behind a passenger jet sounds like.

With water, electricity, Internet and cell phones out of service; there really wasn’t much to do but hunker down and wait. A large tree outside my son’s room had snapped under the pressure of the wind, and so we put him to bed in our room. Other than that, the only immediate issue we had to handle was water leaking under our window sills, which was easily managed with a few towels.

Power and water outages are nothing rare for life in Haikou, so waking up the next morning I was still pretty optimistic that the whole thing had blown over and we’d be back to normal in no time. One look out the window made me reconsider.

The storm had long-since passed, but a small breeze and a bit of rain lingered. The small lane that runs past our apartment was completely blocked by fallen trees in both directions — a pattern that continued as far down the road as I could see. Additionally, the apartment above ours had flooded, and water was leaking through some of our light sockets.

Still without water and power, and with little else to do, I grabbed an umbrella and my camera for a trek around the neighbourhood. The place was trashed.

Walking past an obstacle course of tree debris, I got outside our main gate to find the road completely flooded and peppered with abandoned cars. My attempts to walk around the block were met on all sides by flooded streets, and so I returned to our community and explored within. Palm fronds and tree branches were haphazardly piled everywhere, most of our small street lamps were beyond repair, cars were covered in everything the wind could whip up, glass from apartments above lay all over the place. And everywhere trees, large and small, lay uprooted and on their sides.

I passed by our local xiaomaibu (convenience store) and was happy to see they were both open and well-stocked with water. We use large 18L water cooler (heater, really) bottles for our drinking water and had two full bottles before the typhoon hit, so were not in need, but it was good to see that even so early on there was a water supply available. It was also nice to see that everyone I passed, including the shop owner, was quite upbeat. Lots of smiles and half-chuckled meibanfa‘s.

I returned from my trek dumbfounded by the amount of damage the typhoon had done, having no idea at the time how much worse it was in other parts of the city. I learned later that this storm was the strongest typhoon to hit China in more than 40 years. As of this writing, reports indicate that 26 people in China have been killed, with economic losses in the billions of dollars. 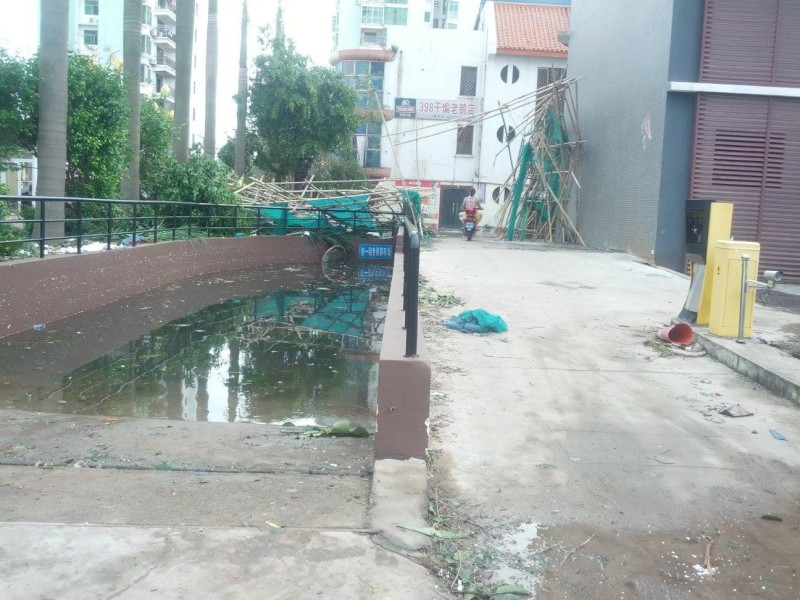 Underground Parking — a watery grave for a good number of cars. Photo by Erik and Nicki Johnson 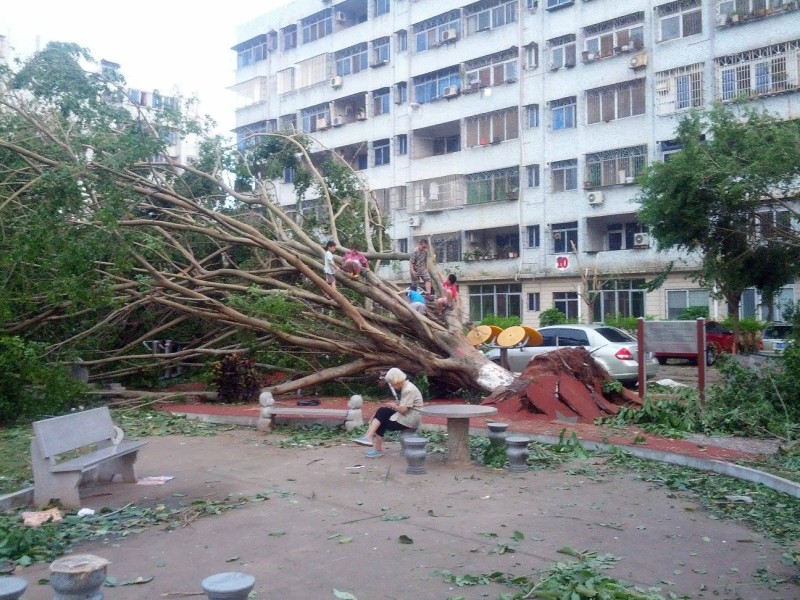 With the water indefinitely off, the most trivial things become so much more significant — washing hands, washing dishes, flushing toilets. As is our routine when the power/water goes out (as mentioned, it happens all the time here), we had immediately filled our son’s bathtub with water. This is usually more than enough water to see us through the outage, but without knowing when the power and water would come back on, we needed aÂ longer-termÂ source. 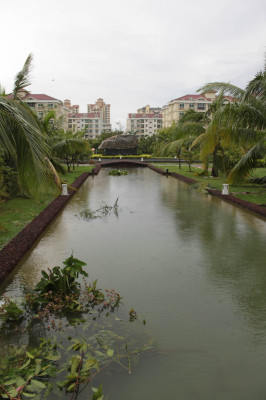 Fortunately our community has a large water feature in the centre of it. The main pond usually has three feet of water in it, with a long inclined overflow pond flowing out of it to accommodate the massive amount of rain Haikou gets in the rainy season. Most days this overflow area is nearly empty, but on my walk I noticed it was filled almost to the brim. It wasn’t clean enough to do anything but flush our toilets with, but that in itself became a luxury.

Late Saturday, about 24 hours after it first went off, the power came back on. It didn’t solve all our problems, but it did bring a great deal of comfort, as it meant we wouldn’t have to sit silently in the dark until we were tired enough to attempt fall asleep in a hot, humid room.

Sunday morning brought little change, though the roads in the community were now mostly cleared thanks to the rather ambitious crew of gardners armed with a few hatchets and a branch trimmer. Water and Internet were still completely down, and cell reception was spotty.

We were doing our best to minimize dish use, but with four eaters eating they quickly piled and began to stink — though to be honest, with no A/C for 24-hours and still no showers, we were in no position to critique quality of scent.

Midway through the day, our friends Nicki and Erik showed up and filled us in on how other mutual friends of ours were fairing. Everyone was in varying states of no water/power/Internet/phone/gas, but they were all safe. It had occurred to me that the abrupt end to my otherwise prolific Facebook posting two days earlier may leave family members concerned, and so was very grateful when Nicki offered to try and update my family when they went downtown in search of active WiFi.

They also brought with them the news that they had seen people in our community getting fresh water from a gardening spout. A walk around the complex later confirmed that there were several such make-shift filling stations with small bucket-weilding crowds standing in the mud around each. The timing was excellent, as the water level in the pond had dropped considerably, and was becoming notably more “pondish” in quality. We weren’t sure of the source of the spout water, but assumed it was untreated. We still had plenty of drinking water, so that wasn’t a problem. As it was pretty clean though, we decided that if the water wasn’t back on by the following day we would boil as much as we could and sort out the dishes. At the very least we had plenty of toilet and handwashing water. 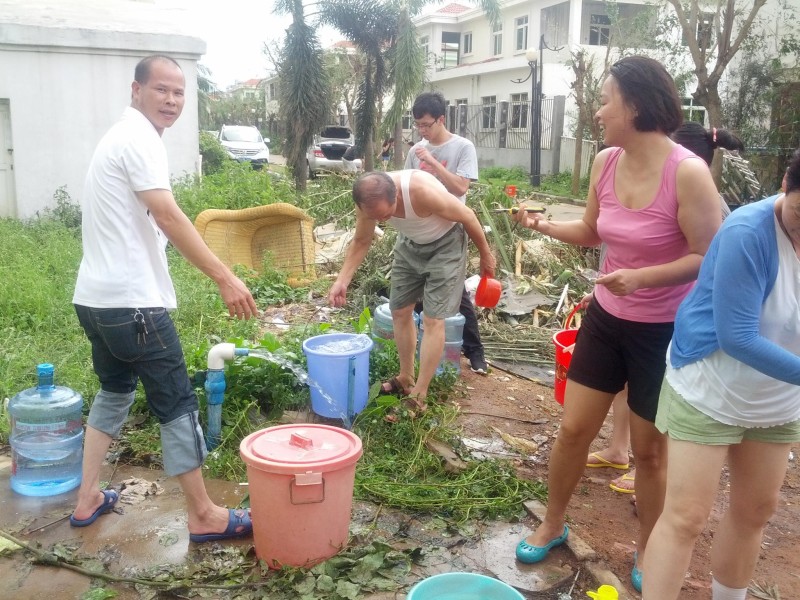 Our local watering hole. Photo by Erik and Nicki Johnson

Monday morning I woke up and mindlessly flipped up the faucet, as I had done many times since Friday night. This time, however, it came with the sweet sound of fully-pressurized flowing water. It was an earthy brown, as it usually is when itÂ has been off for a while, but it was water … from a tap … in our apartment!

Then, as evening rolled around, the Internet came back on as well. Writing this Tuesday morning, it’s still spotty, and while connected now, was off most the night and morning. Still, I’ll take it.

It’s been an intense few days. I’m sure it’s going to take time for the city to get back to normal — as normal as Haikou can be at least — but for us, we’re getting back into our routine and the whole thing is already beginning to feel less like something we’re enduring and more like theÂ memory it is to become.