“Simply click the link below to confirm your relationship with cristy.”
God if the rest of life was this easy…

Anyone else sick of getting these “Please join my mobile phone network” messages? The strange bit is each e-mail I get has a link at the bottom that says I only need to click it and I’ll never hear from them again… yet for some reason I don’t do it. I guess I’m afraid I’ll one day realize the whole world is hooked up to this network of SMS messages (or whatever the heck it is) and I’ll be left out of the loop all because I made a snap decision to stop this junk mail from entering my world.

Right, so anyway, Sarah made it here safely last Thursday and the last few days have been a blur of trying to show her the essence of China. Most of which can be experienced in a shared taxi ride between Jinzhou and Dalian. The confusion, the crowdedness, the fear, the complete disregard for any sort of regulations…

The only thing more than that is really the food – and so far I don’t think she’s impressed, as she’s already bugging me to get us to a Western breakfast ASAP.

I wont bog down the blog with the minute details of what we’ve been up to, but after a trip to Dalian for some shopping yesterday, Sarah has – in what took me three months – nearly equalled my DVD collection. The funny part is, she doesn’t even have a DVD player. But taking a page from Cory’s “How-to-motivate-yourself-to-buy-something” instruction booklet, she now has a big reason to get one.

Our trip to “the city” also got me a free haircut. We met up with Laura, a Chinese Teacher at my school, and went to where she had been slaving all day helping her friend open his new hair salon. As he was giving away free haircuts, half the female population of Dalian was there, which resulted in me having to wait a somewhat chillingly long time (I was a bit underdressed for the wide open doors and cold weather). But it was worth it, I’m happy with the haircut, and best I can tell he’s not given me the David Beckham fauxhawk that the woman gave me last time I got my haircut here. 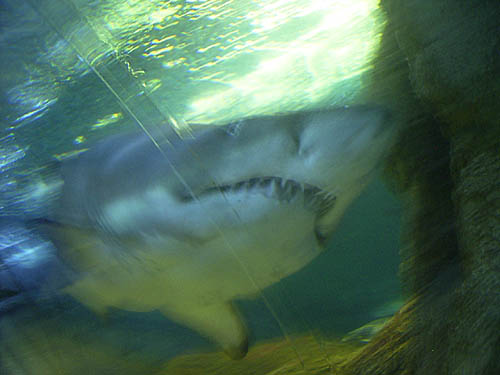 Today was a somewhat damp trip to the Dalian Sun Asia Ocean World with Lorna, Alan & Vanessa, Sarah and myself. I had heard that it was the biggest aquarium in Asia and for 70 kuai, I figured that was a bargin. Now perhaps when you add in the other half (which has polar bears and penguins – but is 80 RMB more) it is spectacular, but from what we saw we were completely at a loss as to how some friends of ours spent four hours there. 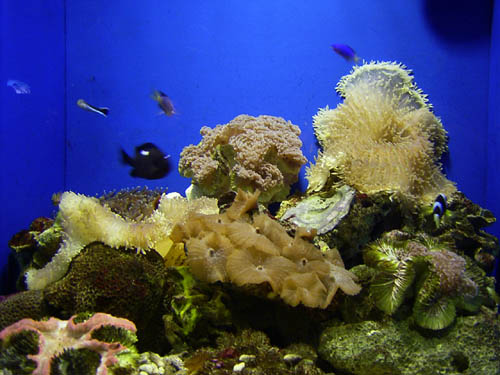 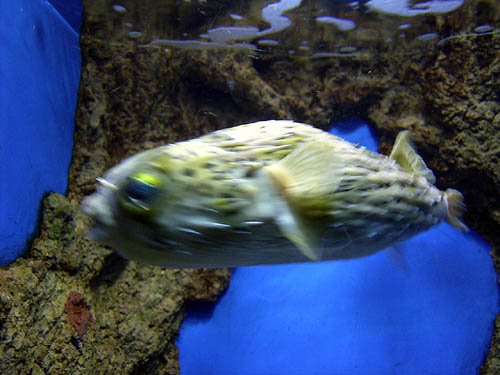 Unfortunately most of these photos suffered the limits of my little camera and are blurry.

The place pretty much breaks down to three parts. A brief foyer that included a number of [Lego-esque] model ships; a room with 20-30 aquarium-type glass enclosures of various sizes and containing various tropic fish; and an approximately 7-10 minute journey on a conveyor belt through a glass tunnel surrounded by some very ugly and sluggish sharks, a few large rays, some sea turtles and a good number of fish. 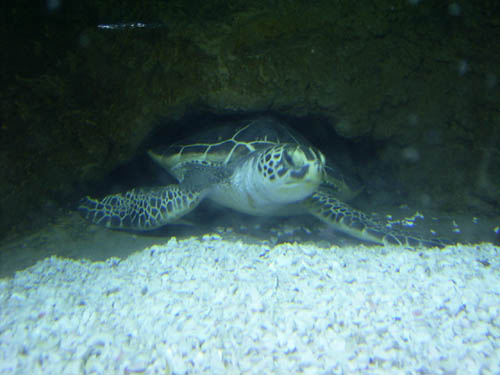 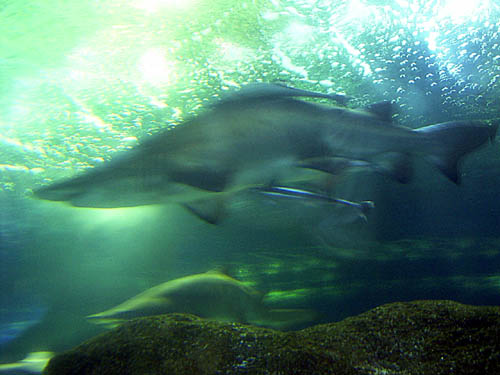 [1] This, according to the sign, is a tartle – presumably the turtle’s slightly ‘special’ cousin. As if to prove the point, we watched one bang its head against a post for about a minute and a half. [2] I admit, the shark bit was cool.

Aside from the humble size of the place, we were also a little put out by the continual barrage of children’s voices saying, “Excuse me… can I take your picture.” Fortunately for me, but much to Alan’s anguish, they seemed to focus on the tallest of the bunch. He got to the point where his very commanding “No.” was overlapping the kids’ “excuse me”. This lends itself to my opinion that if Chinese people, as a general practice, carried cameras taking photos of Lao Wai would replace Ping Pong as the national sport. 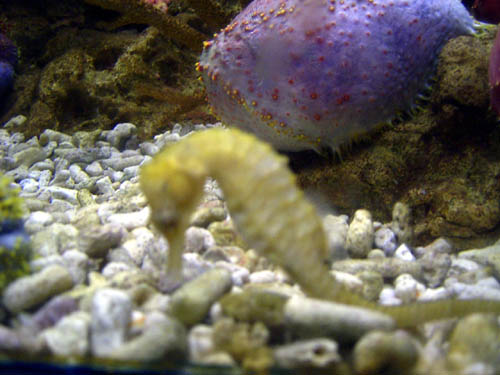 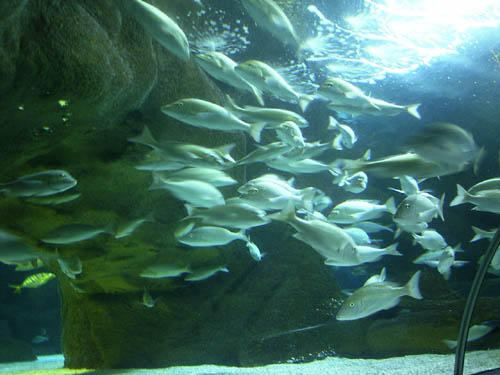 Leaving the aquarium the rain that had threatened us all morning decided to release and grant us a soaking. After a quick, but tasty, lunch of spring rolls, Sarah and I are back at my apartment – her sleeping and me trying to decide what to do for dinner. As mentioned, Sarah’s tolerance of Chinese food seems to be wanning.

Oh, on an end note. I’ve left most of my complaints about my previous apartment associate off of here, but yesterday’s experience was the final straw… or peg… as it were. It wasn’t enough that she scooped my oranges and the tea kettle on the way out the door, but yesterday after doing a load of laundry I went, as you do, to hang them to dry on the line and learned with some frustration that she took all my clothes pegs. The sheer number of pettily frustrating things that living with Emma has entailed has given me new purpose to reconsider the whole concept of sharing a space with anyone.

I mean, I’m a person that shared an apartment with an axe-wielding Horror-movie buff and a coke head who left food-covered dishes in the sink for more than a month, and I took it all in stride. Perhaps it’s the fact that I’m in China and the last thing I need at the end of a day is to have to deal with someone so completely ignorant of what it is to live with a person. What follows is a short-list of complaints (which may look familiar to Cass) that you will quickly see are mostly quite petty and in and of themselves would be nothing… but when put together… will hopefully act as a warning for anyone that perhaps is as excited as I was about getting a roommate.

1) She ate my cereal and noodles without asking or replacing.
2) She continually left the lid off the washing machine every day, so I’d have to pick it off the bathroom floor to give myself a place to put my clothes for my shower.
3) She, oddly enough, left the toilet seat up. Normally a good thing for guys, but our drains leak bad gases.
4) The windows thing – she left them open every day despite me having asked her to stop doing it as the temperature in my room was the same at the start of April as it was in January. A balmy 14.5.
5) She uses no dish detergent, and barely a cloth to wash dishes – making me have to wash everything I use twice, once when I finish with it and once when I need to use it.
6) Instead of buying a big bag of toilet paper to fulfill her share, she bought little rolls – usually of sandpaper texture – making it impossiple for me to tell when it was my turn. (ADDED NOTE: Then took some that I bought for her new apartment)
7) She kept using my washing machine detergent (again, which would have be fine had she asked)
8) After flooding the apartment 3 wks ago, and even since having a party last week, she never mopped the floor to clean up her mess.
9) She flooded the apartment. And nearly did it again, but I was fortunately awake this time.
10) She ‘washes’ the dishes in such a fashion as to completely disregard the marvel that IS our dish rack, and places them in a way that allows water to sit in the plates and bowls for days.
11) In the six weeks she was here not once did she pay for the replacement water for the water cooler. And despite using the gas burner about three times as much as me, she raised issue when I asked her to pay half for a new tank.
12) When I quite casually suggested that everyone come to the Jinzhou Jumper Party together to save on having to collect them all from the train station seperately, and to lessen the stress on them coming here (travelling in groups in China is easiest), she told the folks from Dalian that I went ‘neurotic’ and tried to take over HER party. I’ve not heard much from them since.
13) She took my kettle, but to be fair I did say she could have it. I was confused by her cunningness. We were going through some dishes she could take and she said she needed something to boil water and so wanted to take the pot. I explained I bought the pot, so she said that was fine and she’d just take the kettle. So, now I’ve bought a pot AND a kettle.
14) She nabbed my oranges, all the clothes pins and my bathroom hand towel is missing.

Like I said, you take any one of those (maybe not that neurotic thing, that was pretty mean) by themself and it’s no big deal, and easily fixable, but put it all together and well, I’m happy enough to be living alone. The pain in the ass part is that the tension between Emma and I has entirely been put on me. When asked by the staff at school why I was happy she was leaving, I tried (hopelessly) to explain and I was told that I need to be more understanding and try harder. I was also told Emma has said that I make no effort to talk to her or be nice to her. How anyone could think that I was un-talkative, I will never understand.

Regardless, it’s done. And my new clothes pegs are much nicer than the old ones. 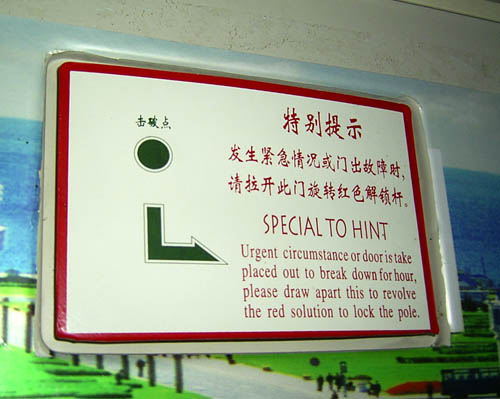 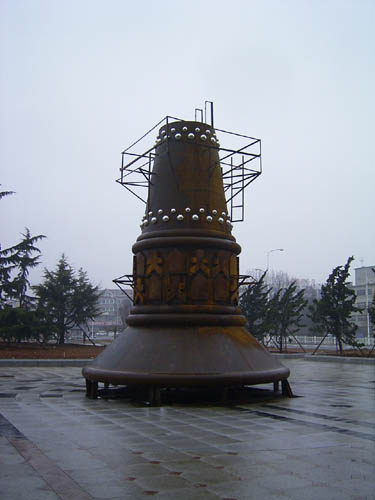 [1] Possibly the best bit of Chinglish I’ve seen yet. If anyone knows what this means, feel free to drop me a line. [2] It is little known that Jinzhou has entered the space race. The unmanned craft will be piloted by a goldfish in a crash helmet.