Where were we? Right… Koh Chang – or rather, the journey there.

I’ve travelled most the various forms of mass transit in Thailand, and when possible I’ve avoided the VIP tour bus solutions. I’m not entirely sure why, maybe because I heard packs were commonly rummaged through in the luggage compartment, or because I just hate listening to a bus full of foreigners talk about how great they are and how many places they’ve been. 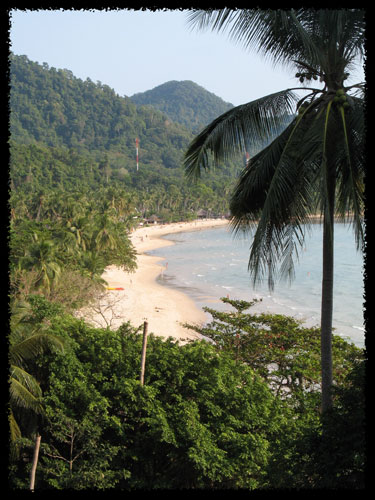 However, the deal with the bus to Koh Chang was sweet (600฿ round-trip, incl. ferry), costing the same (or even a bit less) than what it would have been to go with the State-owned buses – and it shaved a bit of time off of the travel, an important factor when a beautiful white sand beach awaits at the other end of the road.

With a bit of help from Rieng we sorted out reservations at a place called Siam Resort on Lonely Beach, the same beach my friend Freddy and I stayed at last year. Siam Resort, until recently, was a collection of cheap bungalows. However, last winter they built a deluxe resort section, complete with swimming pool. The prices for the resort rooms were too high even for our “but it’s our honeymoon” budget, but fortunately they’ve maintained some of their hillside bungalows.

The bungalows, at 800฿ a night, are not cheap by Thai standards – but have bathrooms, air conditioning, a sweet view and gave us full access to the resort’s facilities (namely the pool). 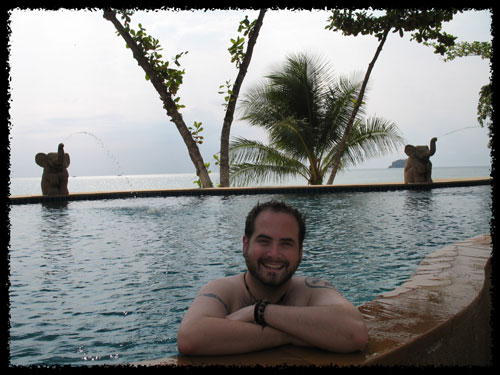 You’re likely asking why the pool was so important when there was bazillions of gallons of beautiful warm sea a shell’s throw away. Two reasons really – it just seems posh and Maggie couldn’t swim – so at first the shallow-end was a bit easier to navigate than the wavy, salty water next door.

Most of our time on the island was spent lounging in the sun (me) and shade (Maggie), reading, drinking fruity drinks and enjoying sunset after sunset.

Our second day on Koh Chang we hopped in the back of a pickup truck and headed to an elephant “camp” for a two hour trek on the back of the massive animals. The trip was divided into two parts, one hour in the jungle and the other treading down a river. The trip offered Maggie her first opportunity to see me truly afraid – something she took much amusement in.

I’m rather scared of heights, but can generally manage without much problem despite the fear. However, stick me on top of a big elephant and get it to precariously balance its way along a narrow path with a deep ravine on the side… I have trouble not letting the sweat show. 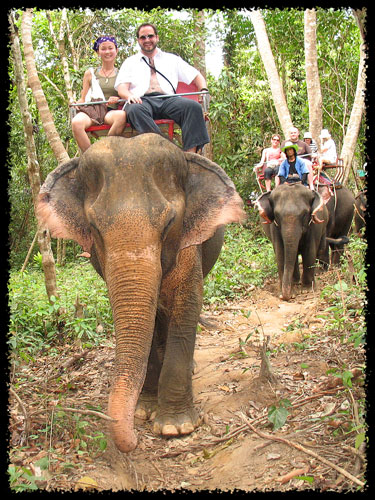 After the first 15-20 minutes though, I settled in (accepted my fate) and enjoyed the trip. I had ridden an elephant before in Thailand, but whereas then it followed a rather marked path, this trip seemed bent on proving that all my notions of where an elephant could walk were wrong. I swear she climbed surfaces that I (with my monkey ancestors) would have had difficulty with.

Just as I began to get comfortable, our ‘driver’ hopped down and asked for my camera. I was a little unsure what to do, but went along with it. The man ran up ahead, all while encouraging our ride – Nung Neng – to ‘come’. For our part, we whispered to her that she should do what he says. It’s one thing being on a big animal when there’s a man sitting in front of you telling it where to go – it’s another sitting there hoping she doesn’t decide to wander off into the jungle at full speed.

He played this game for about five minutes, much to the surprise and laughter of the other handlers. I think he was showing off a bit, as he (and his elephant) were the eldest of the group, and from what little I know about Thai elephant handlers, it’s near like a marriage – well, one that involves a big hook thing to the ear if you’re bad (thankfully Maggie’s not bought one of those yet). 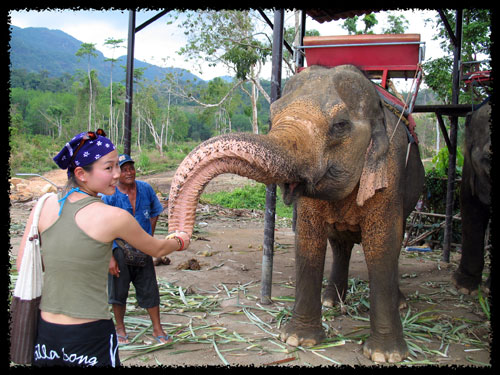 Part of the second half involved being able to swim with the elephants in a deeper part of the river. With Maggie’s swimming skills being a bit lacking, we took a pass and continued up the river a bit. It wasn’t until we were heading back that I noticed all the shit in the water and realized that’s what we would have been swimming in.

Despite the new found respect I had for Maggie’s inability to swim, we got back from the elephant trek and spent some time in the surf working on teaching Maggie the finer points of aquatics – namely, how not to swallow the Gulf of Thailand.

The resort was nice enough to lend her a life jacket, and she stayed in the waves long after I got tired and went for a lie on the beach. It is the most bizarre thing trying to teach a full-grown adult how to swim, but it is even more bizarre to see them floundering around in a foot of water fully armed with a life jacket and goggles. God, I love my wife. 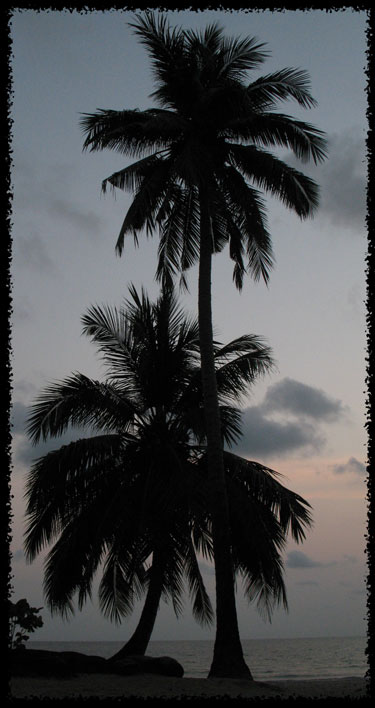 The reason for the intense swimming lessons was in preparation for day three’s activity – snorkeling. Again, we were up early and in the back of a pickup truck. It was a reasonably quick drive down to Bangbao, Koh Chang’s southern port town which consists of not much more than a pier weighed down by a series of seafood restaurants, dive businesses and trinket shops.

From the pier we boarded a big boat and headed out for a day on the sea visiting four islands and their surrounding coral. The whole day cost us 500฿ each and included snorkel/mask rental, and food all day.

After about a 30-45 minute motor out to the islands, we laid anchor and were told we had about 50 minutes before we moved to the next spot. Maggie was pretty shaky for the first 20 minutes or so, having real difficulty in spite of the life preserver somewhat securely attached to her. For some reason once she went horizontal to look in the water, she couldn’t get her legs under her to bring herself back upright. 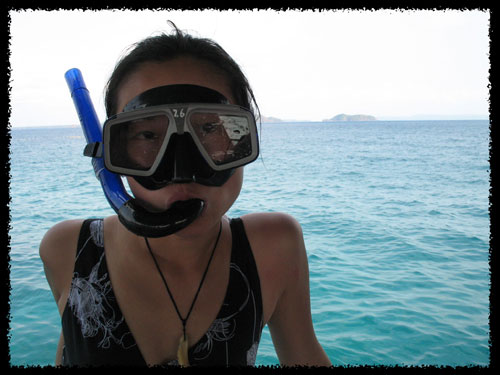 I tried everything to get her to understand the basic physics of swimming, but there were a few points where I just had to look at her and laugh. It was just bizarre to see someone so completely incapable of swimming. She eventually got it though, and managed to dunk her head a few times to see a couple fish – the whole snorkel thing was the next hurdle.

It was a long day of in and out of the water, but it was fantastic. Eventually Maggie found her stride and between making sure she didn’t put her foot down on an urchin, I managed to enjoy myself as well. As a person who grew up in swimming pools and lakes, it astounds me that there can be beautiful things under the water, and I’m awestruck to be surrounded by hundreds of fish – until the little bastards start going for my earrings.

Back from the snorkeling we stuffed ourselves with beach BBQ. One of my favorite things about the beach bungalows is that you can get amazing fresh BBQ’d fish and seafood. Needless to say, we took our fill of it every night.

The last night on Koh Chang we headed back down to Bangbao, accompanied by Stuart and Jackie – a lovely Aussie couple (he’s technically Brit-Kiwi and she’s technically Thai… but), and had a great meal of barbecued mackerel, lime and chilli squid soup. The food was great, but the real treat was having some people to talk to. 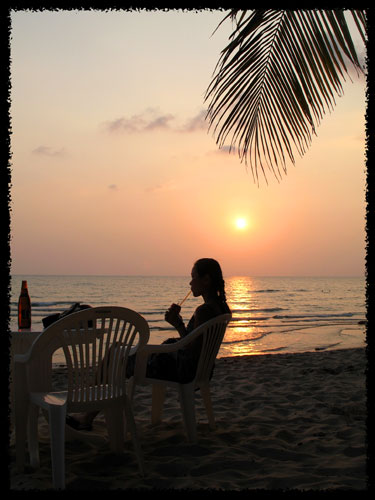 Unlike the other two times I visited Thailand, this time I made virtually no friends. It was bizarre, and I’m not sure if it was more because of the place we stayed or the reason behind being there.

We left the island just as a massive storm hit, leaving me drenched due to the fact that I was the odd man out on the songthaew. Songthaews are covered pickup trucks that have had two benches installed in the back (sÅng meaning two, and tÄƒew/thaew meaning row), and are the most common way to get around the island (and most of Thailand for that matter). When the benches are full, a person can stand on the back, with feet on a small metal grate and hands on… well, whatever you can hold on to really.

Cruising around the twisty coast road on the way up to the ferry, I was last on, and therefore got the priviledge of the standing spot. It provided a much better view, and so generally I didn’t mind – until the rain started… A few small flecks on my sunglasses quickly turned into slippery hands and an extremely clear view of just how little breaking power we had going down the jackknife turns.

I survived, and despite a torrential amount of rain as the ferry pulled away from the island, the 20 minutes across cleared it up and I was dry before I got on the bus back to Bangkok and our last three days in Thailand.