We were both a bit sad to leave Koh Chang, and like most of the places I’ve been in Thailand, I’d like to return and explore it properly one day.

The bus ride back to Bangkok was much the same as the ride there – complete with loud, boastful foreigners talking between themselves for the whole bus to hear. Adding to the oddness of the characters on the Thai tourist buses was a middle-aged Canadian sitting beside me.

Shortly after leaving the port I noticed movement out of the corner of my eye, and looked over to see a cockroach crawling along his pants. I was halfway through saying he had a big bug on him when he nonchalantly placed his hand over it. Now perhaps it was an icky coincidence and perhaps I had spent too many days previous in the sun, but it looked protective rather than accidental and right weirded me out.

Intermittently throughout the remainder of the 5 hour trip, I would see the bug continue its exploratory wander around the man.

Anyway, we got back to Bangkok and headed right to Reing’s where we got to spend a bit more time with her and her sister Tee. We also had a chance to figure out what we wanted to do for the last few days of our honeymoon.

For all the time I’ve spent in Thailand, I’ve done very little exploration of Bangkok. I hate the city. It’s hard for me to say, because I love most everything else about Thailand with a great amount of passion. However, Bangkok seems to bring together the worst elements of Thailand – heat, cheats and poor mass transit – and mix them into a bundle of sequential frustrations.

That said, I’m always happy to prove my preconceived notions invalid, and was eager to see a bit more of the city proper. Leaving Rieng’s we spent about 2-3 hours getting down town on mis-numbered buses and a taxi that refused to take us on the metre and wanted to charge us 4x the rate – if there ever was motivation for me to learn the Thai equiv. of “æ“ä½ å¦ˆ!“, that was it.

The one benefit of Khao San Rd. is the endless supply of guesthouses. Perhaps there is an equivalent locale downtown as well, but I wasn’t real sure where to look. Fortunately Reing pointed us in the direction of Soi Kasamsan 1, almost directly across from the new (and massive) MahBoonKhrong (MBK) Center and access to the clean and fast BTS (skytrain).

We had some trouble finding a place on the road with available rooms, but lucked out with the absolute last stop on the road. The Patumwan House is a bit pricey for your average backpacker, but for us ending out our honeymoon it was the perfect fit. For 1,000฿ ($33 CAN/200å…ƒ) we got a massive room with hardwood floors, satellite TV, a full-size fridge and bar and a full bathroom.

Considering we paid the same price for rather dirty/shitty hotels here in China, it was great. It also gave us a good base for exploring the downtown area.

After a bit of wandering around the high-priced shopping block (MBK/Siam Discovery Center) we jumped on the Skytrain and headed to Lumphini Park and the adjacent Suan Lum Night Bazaar. The night market was great – crowded, noisy and full of cheap knockoffs – everything a night market should be.

Though, like China, you bargain for all your wanted wares in Thailand, there’s a different flavour to it. Perhaps it’s just biased perception on my part, but it genuinely feels like the vendors are less in it to gouge tourists and more just interested in selling their stuff. Prices are generally marked high to begin with, but drop much faster, and much easier than their Chinese counterparts.

We spent a few hours wandering around the maze of stalls selling everything from Buddha artwork to dried fish snacks. I got the impression that Maggie could have spent hours more there, but my nagging finally got the best of her (and she ran out of money). We retired to our rather luxurious room and a few bottles of Thai beer. 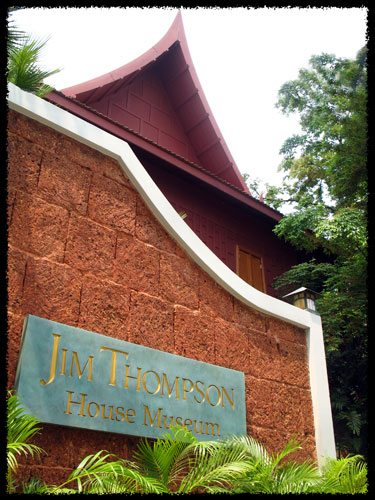 Waking up our final day, we headed one street over to the Jim Thompson House. This, like the night bazaar, came with high recommendations from Allen and his wife Kade. I had heard of the Jim Thompson House on previous trips to Thailand, but hadn’t bothered to check it out. Now, with it a 5 minute walk away, there seemed little reason not to.

Man, it’s great. The 100฿ entrance fee gets you an English-language (French also offered) guided tour of an amazing collection of traditional Thai houses. American-born Jim Thompson moved to Bangkok shortly after the Second World War, and helped revitalize the Thai silk industry. His legacy, however, is his collection of six authentic Thai-style teak buildings filled with an invaluable collection of Thai art.

Interesting side-note, in 1967 Jim Thompson disappeared without a trace while hiking in Malaysia’s Cameron Highlands. To this day, no one knows what happened to him. 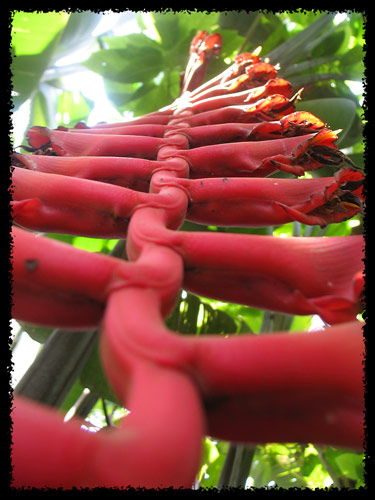 After the tour we contemplated how to best kill time until our 2 am flight; eventually deciding to take refuge from the heat in the local cinema. It having been seven months since I had seen a film in the theatre, it was much welcomed – and was a well-disguised way for me to justify watching Charlotte’s Web (c’mon, it’s a classic).

With the movie done and still some time left we headed to Bangkok’s other famous, if not more shady, night market, Patpong. We were there before all the sex bars and ping pong shows really got going, but managed to have a good time anyway.

We returned to the hotel to pick up our packs. The staff had told me the day before that we could catch the airport bus at Victory Monument, and so after double-checking with the receptionist on duty, we caught the BTS there. After wandering around the massive square for about 15 minutes unsuccessfully locating Airport Express shuttle stand, we gave up and grabbed a cab to Khao San Rd. to where we had been dropped off 10 days earlier (and where I had previously taken the shuttle from). 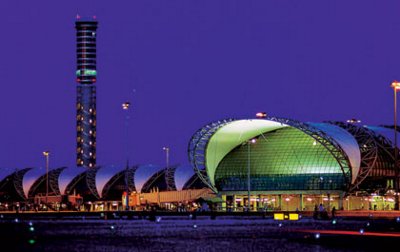 A note about Thailand’s new airport – Suvarnabhumi Airport (BKK): This is the most retarded airport ever. Its check-in area is similar to Shanghai’s Pudong (PVG) airport, but the similarities stop there. After long waits in check-in and customs lines we were forced to walk for about a kilometre past various ‘shopping experiences’ to get to our damn gate.

Generally speaking, the practice is to have open gates where you can spend your time wandering aimlessly about high-priced coffee and souvenir shops while you wait for your boarding time. Not so at Suvarnabhumi. Now a million miles from anything worth browsing, you are forced first through the security check and then a gate check – making return impossible. The waiting area, with most of its lights off, made it impossible to do anything but sit and count the minutes until boarding.

Anyway, bad airports aside, we got home. And, as might be guessed by the tardiness (that word makes me giggle) of these posts, we have been trying to get our new married life sorted out since. Now, with the wedding and honeymoon all behind us, we have no option but to look ahead and scratch our heads pondering what’s next.

Surely, somewhere down the line, yet another return to Thailand will be on order. I’m running out of curry paste and already miss my friends there (never mind the warm, beautiful beaches).