It’s been over a month since we returned from our honeymoon in Thailand, but I’ve only just found the time (or rather the patience) to wade through the hundreds of photos I took and pick out the ones to put online (and to print for our little honeymoon photo album).

After seeing my family off at Shanghai’s Maglev station, Maggie and I found a netbar and decided it was high time we got some idea as to what we’d be doing and where we were going when we arrived in Thailand later that day. With the wedding and my family visiting we had not had much time to make concrete plansï¼Œbut thankfully Thailand is casual enough about everything, it’s dead easy to just show up.

The flight went smoothly, and Maggie set foot in a foreign land for the first time in her life. Getting off the plane I realized that BKK airport looked considerably different from the way I remembered it my previous two trips to Thailand. Sure enough, it was a completely different airport. Despite this, or perhaps because of it, we easily found our way to the shuttle bus counter. 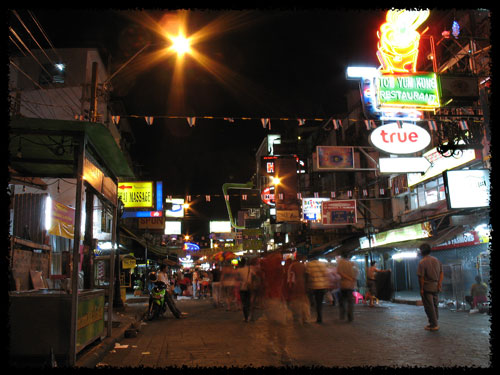 I had considered choosing an alternative spot to hole up in our first night, but in the end (what with the considerable amount of planning) we ended up following the masses to Khao San Rd., Bangkok’s backpacker mecca. I’ve stayed on, or near, Khao San Rd. every time I’ve been to Bangkok, and it’s increasingly lost its flavour.

When I first visited the city three years ago I was a bit starry-eyed by the 15&#3647 ($0.50 / 3.5å…ƒ) pad thai and the copious amounts of dreadlock-sporting individuals. Now, it can all burn for all I care. It was then that I began to realize the ways in which I have changed over the past few years.

In line with this, done am I with the small, sweat-stained guest houses with shared bathrooms and cold showers. I’ve not quite graduated to the clean towels and room service level of accommodation, but I was happy to pay about five-times the amount I previously did to secure Maggie and I a room with air-con and an ensuite shower. 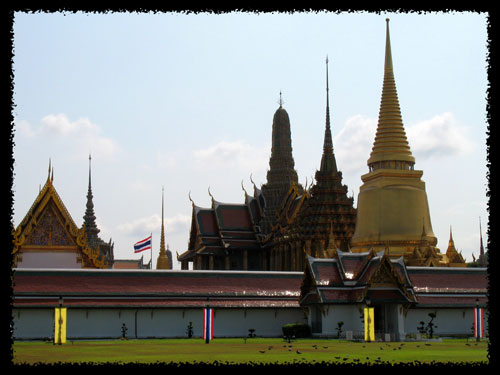 Our second day we walked down to the Grand Palace, where I, for the third time, forgot to wear pants and refused to put on loaners. I get that you need full-length pants to visit the palace out of respect for the king, but I also get that it was like 1,000°C in the shade with humidity of a level allowing you to swim, not walk, to most places.

Being the Chinese New Year, the People’s Republic was well represented and out in force in Bangkok, with the Royal Plaza lined with tour buses (some from as far away as Xin Jiang) – causing us to push through crowds of Chinese just as (un)aware of them as their stay-at-home counterparts.

Saying to hell with any further sightseeing while the sun was at its zenith (and half of China present), we hopped on a bus to Bangkok’s far-western end to pay a surprise visit to my “Thai Family”.

I met Rieng and her family on my first trip to Thailand, and they’re always one of my primary motives for returning to the country. As the last time I visited them I had just started things with Maggie, I was very eager to introduce them to their new NÃ³ng SÄƒao (as they affectionately call me NÃ³ng Chaai). 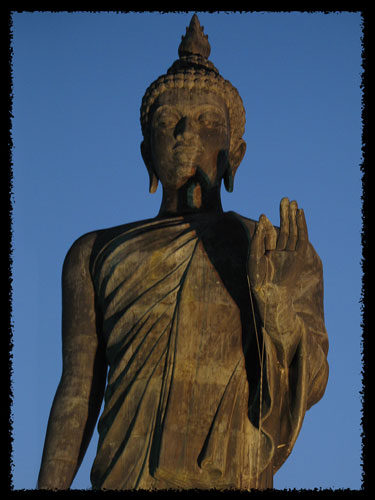 In the evening Rieng and her older sister Tee took us to the Standing Buddha, the largest free-standing Buddha statue in the world, located in a large park not far from their home. Despite living in China, with Buddhist temples everywhere, this was Maggie’s first real exposure to Buddhism in any true form. It was serene.

After sunset we headed to meet Rieng’s other sister, Ree, who had been busy all day helping prepare a local temple for a festival to celebrate the building of a new addition.

The temple festival was absolutely nuts. Upon entering the temple complex you are faced with a bombardment of people moving every which way, monks on a deafening loudspeaker rambling on about deeply religious things (like, don’t forget to donate). Seeing my wide-eyed confusion, but not my rather passive Thai friends, a monk came up and attempted to explain what I should be doing by pushing his thumb into the palm of his hand. 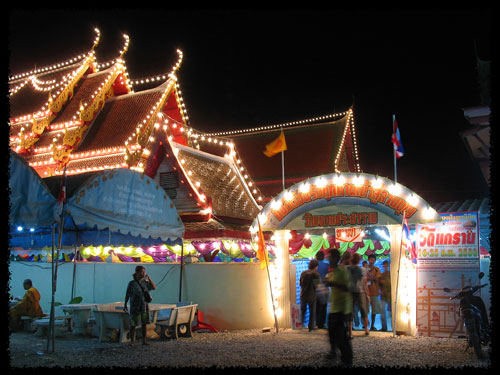 With Maggie looking just as lost as me, we hastily followed the three sisters to a place where we dropped our shoes, and paid 20&#3647 for a random assortment of things – a lotus, a pencil, a few sticks, some paper, a candle, and a bunch of small gold flakes. The order went something like this:

Afterwards we wandered around the attached fair-like area full of games and stalls touting every Thai food you could imagine. Settling on some edibles, we went back to Rieng’s, chowed down and got some sleep.

The next morning we were up early saying goodbye to Rieng and returning to town to catch our tour bus to Koh Chang, the island whose beaches we planned to spend the larger portion of our honeymoon on.