So, I made it. I survived a year in a foreign country. Today officially marks the one year anniversary of my life in China. Whether you’ve been with me since the beginning, or you’ve tuned in more recently (or just came here searching for “China KTV girl photo” Dag Yo I’m In Jinzhou

It’s funny to look back on some of my initial entries and see how I saw things then and how I see things now. I am sure most, if not all, foreigners that come to live in a strange country could say the same… but it’s interesting to see the areas my understanding has grown, and also the areas where some biases have built up.

Anyway to mark my one year anniversary I’ve finally sorted out why Chinese birthdays are so wacky. It’s a bit amusing to me that even after sorting it out I think it’s far too complex and diluted – but at least now I understand it.

Basically I’ve long been confused as to why Chinese people always state they are a year older than they are. When asked, they just say it’s how they count the years in China and then referenece vaguely the Lunar Calendar. So, for example, Maggie, when asked will say she’s 26, though she was born in 1980 and hasn’t yet had a birthday this year. She was more than happy to cut her age back by a year, after I explained that Chinese birthdays just confuse Western people.

The reason for this extra year is that Chinese people consider the time spent in the womb as time lived in the scheme of things (raises all sorts of interesting complications with the commoness of abortion here). So, the moment you are born you are one year old. Then come your one year mark in the cold harsh world, you actually turn two years old.

This is all further complicated by the fact that the majority of Chinese people don’t celebrate their birthday on their birthday, but count themselves one year older come Spring Festival (usually in January or February, dependant on the Lunar Calendar). SO, if you happen to be born, say… January 6th (as one of my students was), you are immediately one year old, and then come Spring Festival (a mere couple weeks later) you turn two years old. Two years old and only a few weeks outta the womb – the pressure to be walking and talking must be unbearable.

So, that’s it. It’s not all together much clearer why this is done, but that’s at least how it is done. I guess the reason it’s done is much like many things here, a clash of culture/tradition verse the reality of the modern world. Because the Western world largely invented moderninity, you rarely see too many conflicts like this… western culture just adjusted and evolved with the times, however in nations that are still modernizing, the conflicts – though sometimes arbitrary – are more evident. 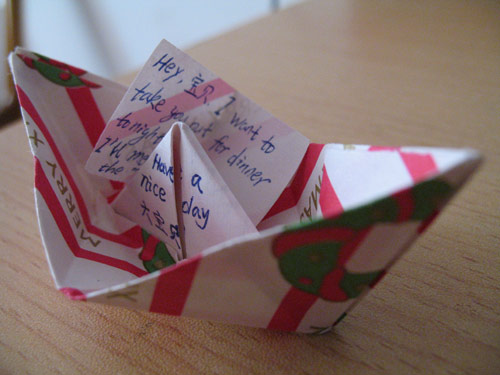 Well, I just found a little origami boat in my fridge carrying a note from Maggie saying that she’s taking me out for dinner tonight, presumably to celebrate my having lasted a year. Interestingly, or not, tomorrow it’ll have been one year since I met the love of my life.

Chinese Pet Names
If you look closely at the picture you can see the characters å®è´ (bao bei) and å¤§å®è´ (da bao bei). These are two terms of endearment that Maggie and I often call each other. Literally the first means “treasure” and the second means “big treasure”, but in use it’s more of a way to just say “baby” or “hon”, like you would in English with a boyfriend or girlfriend for a pet name. The å¤§ (da) part, well… I think that’s Maggie’s way of being cutely cheeky, as it means “big”. 😉