Right, so I just finished working five straight days at a primary school, and my poor white ass is whipped. My god, is teaching in primary schools ever a different experience than teaching in an additional learning centre like Future School.

The school, YuWen (è‚²æ–‡), is not far from where I live in JinSanJiao (é‡‘ä¸‰è§’). It is part of an outside contract that Future School arranged with the private primary school, and was worked out as OT hours for me (100RMB or $15CAD per hour). I initially only agreed to work four consecutive Wednesdays, and after two was ready to quit. See, I had been promised a Teacher’s Assistant and that just got dropped somewhere along the line (quite typical actually).

Out of the four hours I taught, the first two were manageable without a Chinese translator/disiplinarian, but the second 2-hour class was a nightmare of a level I had not had the misfortunate of encountering in my near-year in China. After effectively quitting, I somehow got suckered back in with Vicky, the Chinese teacher trainer/odds and ends doer for FS, as my TA. This worked out well, and I agreed to do an additional solid week’s worth of the job… Monday was fine, but come Tuesday I got a message (10 minutes into my first class) that Vicky wouldn’t be coming… for the rest of the week.

I entered my class and it was almost like they could smell the fear. When they asked me if Vicky was coming it felt like that scene in the movies when hapless victim falls off the boat into shark infested waters and the camera’s looking up at the tasty seal-like thrashing. You don’t know when they’ll attack, but you know it’s coming.

After a helluva day, I begged and managed to get some staff from our FS location to come with us for the remaining three days. It went ok, but the whole process wiped me out and I’ve little energy for my regular classes this weekend.

The good news is that the week’s worth of work netted me 2,000 kuai – which will go a long way to paying for my Spring Festival adventures, something that is getting more and more expensive.

Maggie and I are planning to go up to Haerbin (å“ˆå°”æ»¨), in Heilongjian (é»‘é¾™æ±Ÿ) province, to check out the ‘world’ famous Ice Lantern Festival featuring a load of amazing ice sculptures. We debated where to go, and for a while contemplated making the trek to Xi’An (è¥¿å®‰) (famous for the Terracotta Warriors). In the end we realized we can go to Xi’An or anywhere really, in warmer weather and probably appreciate it more, whereas Haerbin is only properly appreciated in the deathly cold depths of winter (-40 is a common figure on the thermometers).

Well, I’m going to go get some much needed R&R with a couple episodes of LOST: Season 2 and Lord of War. 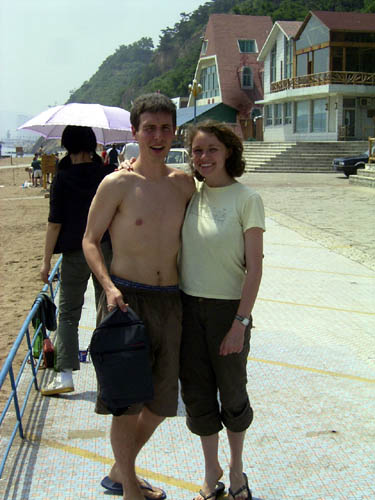 Oh, one other thing. I was cruising the net the other night looking for apartments in the area and came across a rather interesting “profile” on my friend Tim. I laughed for nearly five minutes at his celebrity. Tim came to China last year (near the same time I did) and works with us at FS (a franchise one, but we still call him family).

Back near the start of the summer he was approached at our FS BBQ to host an English segment of news on Dalian TV. It all went off and he’s been redubbed Bud Briggman (where in The Abyss did you pull that name from Bud?) to the better part of the city’s TV viewers. Anyway, it’s well cool, but I was just knocked over that he’s even got publicity…

It was actually through him that a few weeks back I did a TV spot promoting the falsity that shopping in Dalian is a breeze because many of the shop attendants can speak great English. I know, I will not pass Go, I will not collect $200, I am going directly to hell – but damn, at least I can say I was on Chinese TV first. Watch out DaShan.