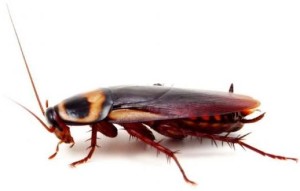 I realize I risk a little goblin coming in the night and stealing the essence of my manhood by saying this — but I fucking hate bugs.

I’d have to be more than a bit ignorant to move to a tropical island and not expect to cohabitate with the creepy crawlies, but it doesn’t disturb me any less. For the most part though, Haikou isn’t too bad. I’m sure there is a six-legged sea of ‘sects just waiting for me outside the city, but here among the concrete and tile, it’s relatively calm.

But though we live in a new apartment, and it appears to my untrained eye as well-sealed; drop a piece of food (a 15-month-old does little but), and within seconds a ration line of ants has formed with a tin cup and bowl. Leave some fruit out for more than a few minutes and a squadron of fruit flies gather — their tiny little wings a buzzing cadence that if you listen closely enough sounds like Ride of the Valkyries.

Our nightly R&R in front of the TV is routinely interrupted when a big fat flying beetle dive bombs our thought-to-be-secure position on the sofa.

Twice now I’ve been sitting, again in front of the TV, and felt a tickle on my neck and arm. Absentmindedly scratching while hypnotized by Gordon Ramsey’s red-faced rants on Hell’s Kitchen, I was startled to come away with a hand full of legs from a millipede that had made its way up the back of the couch.

Moths, glowbugs, bright-green clingy beetles and a hodge-podge collection of other insects have also sought refuge in our ground-floor apartment.

Spiders of various sizes and behaviors also are common guests, but you know the old saying — the blood-sucking predator of my enemy is my friend (geckos fit in this category as well — really, the more endoskeleton allies I can amass, the better).

But then there’s the f’ing cockroaches. They’re frequent, they’re resilient and they’re massive. I know they’re relatively harmless, but there’s no quicker way to get my arm hairs on end than to catch one of these little suckers speedily crawling through my peripheral vision.

We’ve had roaches in a couple apartments here in China, and they’ve always been the little 1″ long guys. They don’t much bother me. However, something changes when a bug gets to the size where I can hear it walking across the floor.

It’s funny how quickly my otherwise quite rational mind melts and flushes out of my skull with a chill when I see these 3″ long, winged critters scurry across the kitchen, out of the bathroom, or up the bedroom wardrobe. Somewhat remarkably, all of that I’m learning to handle with a bit of grace and a well-wielded shoe.

This morning, however, brought a new level of violation. As is our a.m. routine, I hang out with Casey and a crinkled collection of flashcards on our bed while Maggie heads to our en suite bathroom to brush her teeth. This morning she was in the bathroom for a minute or two when I heard her startled shout. It’s the same noise she makes when she sees everything from an ant to an elephant, so tough to judge.

“There’s a cockroach in our toothbrush mug!”

Apparently mid-brushing she noticed the critter hanging out at the bottom of the cup we put our toothbrushes in. We’re not talking about a little bug at the bottom of a cup — the thing nearly filled the mug. As is her way with such things, Maggie calmly left the bathroom as if it had been handled (even returning her toothbrush to the overly-occupied cup) and expressed in no uncertain tones that I would need to man up and take care of it.

Two toothbrushes in the trash, a cockroach in the toilet (two flushes, just to be sure), and a VERY well-scrubbed mug later; I’m now officially at war with the sonsofbitches. Mess with my house, mess with my family, but do not fucking mess with my toothbrush.

I know it’s a battle I can’t win. I know that they gather in the walls, drains and other dark cool corners plotting. I know that it’s only a matter of time before one induces the purchase of plane tickets when it finds its way into the mosquito tent that covers our bed. But I’ll be ready. They may be fast and gross and able to survive a nuclear holocaust — but I have pretty big feet. And while this post may work to disprove the idea that a man with big feet has equally big manhood — he does have big shoes. Bring it, fuckers.