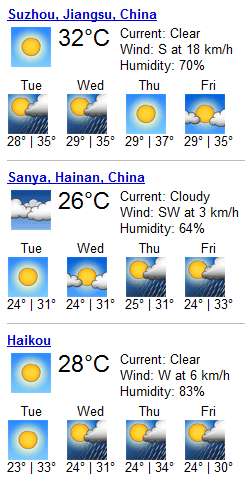 When I mention to people in China that I live on Hainan I almost always get a, “Really? that must be great.” And it is. Everything that sold us on moving down here this past March has held its shine. Similarly, the things we steeled ourselves against are also ever present — one of the largest being the unrelenting heat.

Summer in Haikou is hot. Damn hot! But, and this is a bit surprising, it’s cooler than summer in Suzhou/Shanghai.

I can only chock it up to the unrelenting weirdness of China that I can travel 1200 KM south and find cooler weather (and, obviously, not be in the southern hemisphere).

As I’m sure is true with most who move to tropical islands, we migrated here for the environment and the weather. I’ve never been a fan of extremes in temperature, and after half a decade I couldn’t imagine going through another cycle of Suzhou’s bi-polar seasons — hotter than tropical-island-hot in summer and freezing (literally, as there is usually snow) winters. To be fair to the city, Suzhou does have very pleasant spring and autumn periods, all three weeks of them.

In a lot of ways Haikou’s summer is similar to Suzhou’s. Extreme heat with extreme humidity. Where Haikou pulls ahead (in addition to that couple of degrees less of mercury) is that we have the beach, and swimming pools, and lots of sunshine. Suzhou gains most of its summer heat by trapping it in a mass of grey that near-permanently covers the city, Haikou gets its heat from brilliant blue skies and a whole lot of sun. Though the temperature result is the same, emotionally, I’ll take the sunshine every time.

Moving here on the wrong end of summer, the other thing we prepared ourselves for was the rainy/typhoon season. Running from April to October, we’re smack in the middle of it, but according to Wikipedia, the worst of it arrives August-September. Aside from a few full-on rainy days, so far the “rainy season” has amounted to a clockwork-like shower in the mid/late afternoon and sun the rest of the time. If two months of damp is the price we pay, I still think we’re getting a bargain.