Well, I’ve about 10 minutes before I book it out the door, find a cab down the hill and get wisked off to the MUNI station, to the BART station, to the airport (the hip bone is connected to the…) and I figured I’d do one last entry on this side of the Pacific.

San Francisco has been amazing. I got here around noon on Wednesday after an early morning goodbye and a few cups of coffee with my Aunt Beth. The flights were straight-forward (if not down and to the left a little) and I had no problems with customs, deciding at the last moment to balk the advice to bring herbs and spices that I might like to use in China that they don’t have there – namely oregano… I just figured, why push my luck?

Loaded with my bags I found my way down town to Christena’s work and dumped my bags, With some quick basic instructions she told me where best to wander and I spent about four hours randomly walking around China Town of all places. I also hit Market Street, got myself the Garden State soundtrack. All the soggier, I returned to her office at 5 and we went back to her and her boyfriend Jeremy’s apartment – where my 4 a.m. start-time caught up to me and I fell asleep watching Friends until Jeremy came home at about 8 and we headed to a Taqureia (read: Taco Bell if Taco Bell was hip, really ethnic and good tasting) and a local bar for a quick drink. 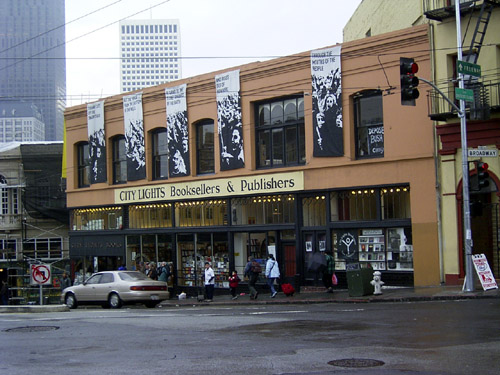 The City Lights Bookstore is famous as a hangout for the beat-icons Kerouac and Ginsberg and has just a LOAD of great books – sadly what they had stores of in books, I lacked in money. 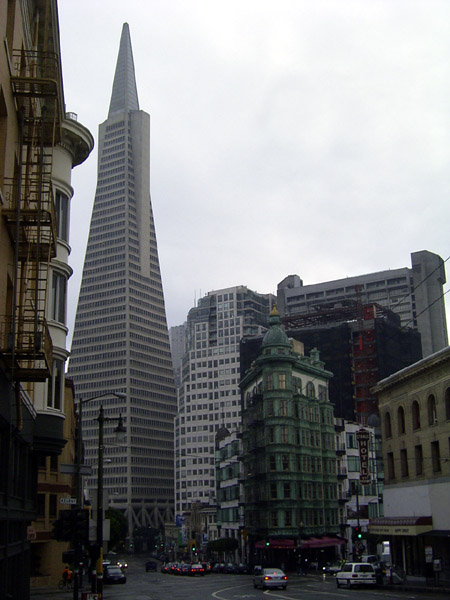 This is some corporate building – Trans… something. 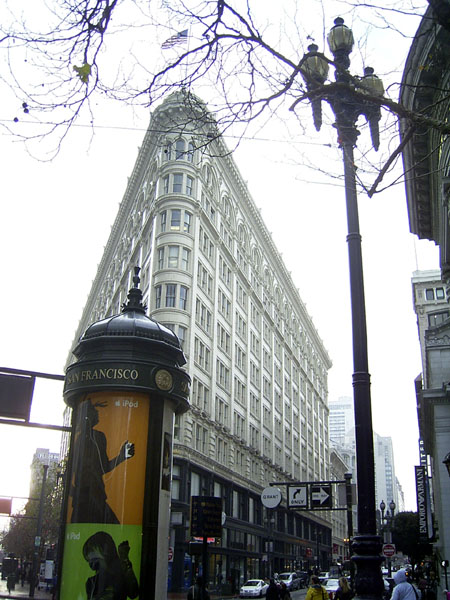 On Market St. – I had thought that buildings like this would be rare… I was wrong. Decidedly San Franciscan though.

My hosts live at the base of Twin (frigin’!) Peaks, which is just too cool for words, ah, with the exception of those that I’ve just wrote, and these… It’s by the Castro District… and what’s with all these rainbow flags? 🙂 Yes, Castro is largely the “gay” area, but they tolerate us straight people. 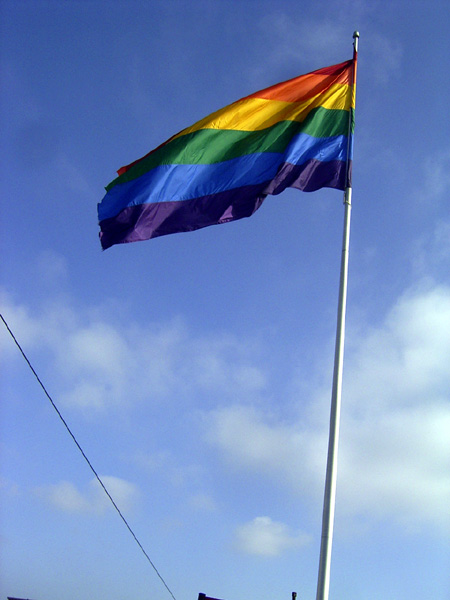 So, with some planning advice from Jeremy, I woke up yesterday morning ready to face a world full of rain – but was pleasantly surprised with the pile of sunshine that lay outside the apartment window. Cursing myself for ignorantly sleeping in (I thought it was going to be a wet and miserable day) I hopped in the shower and headed down to the MUNI station to head into town. After departing the station it dawned on me that I had forgotten my wallet back at the apartment, but thankfully I had $100 CND on me that I swiftly transfered to fuel my touristy ways. 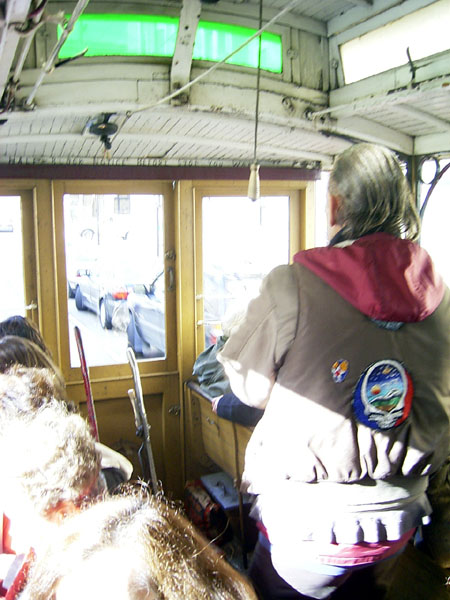 How tight can chains be pulled man! 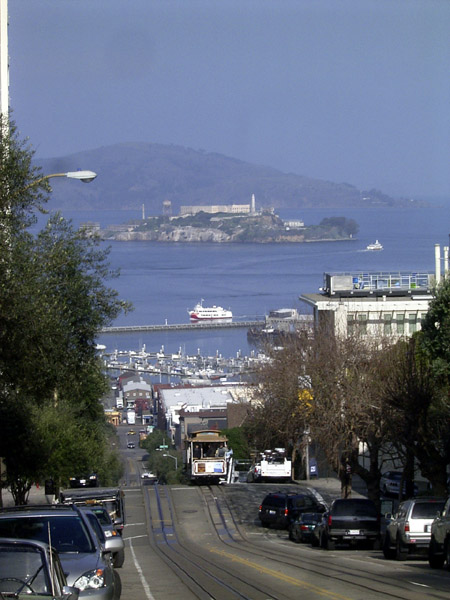 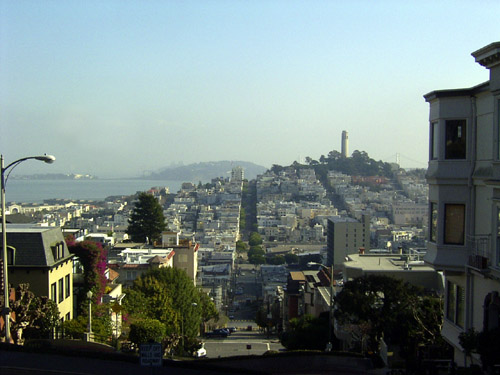 That’s Coit Tower in the background. 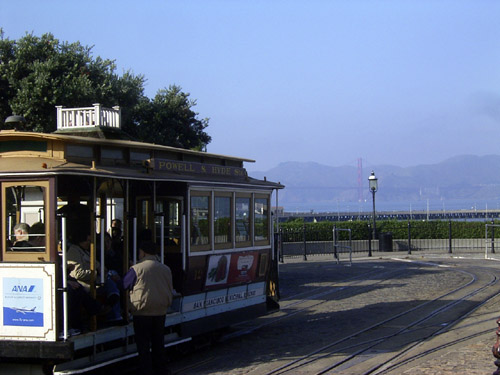 Getting on a cable car (I like trolley better) I took it across town to Fisherman’s Wharf, where I caught my ferry to Alcatraz! For $16 you get a round-trip ferry ride to the island and an audio tour of the Cellhouse. Another bonus was a guest author that was on The Rock signing his book about his time at Alcatraz – that’s right, I’ve met a real live ex-inmate of the infamous penatentury. 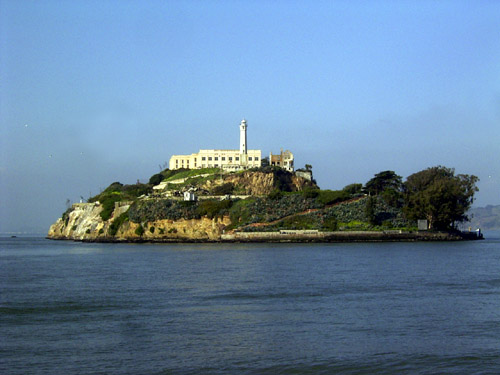 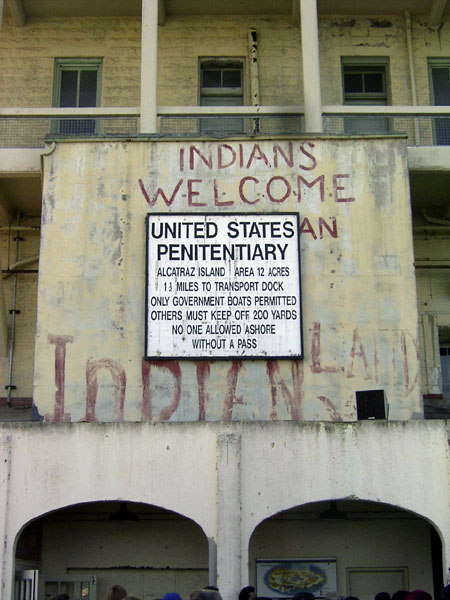 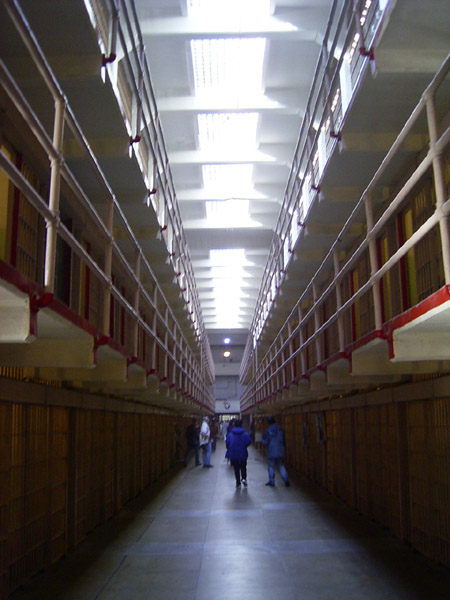 Known as Broadway by the cons. 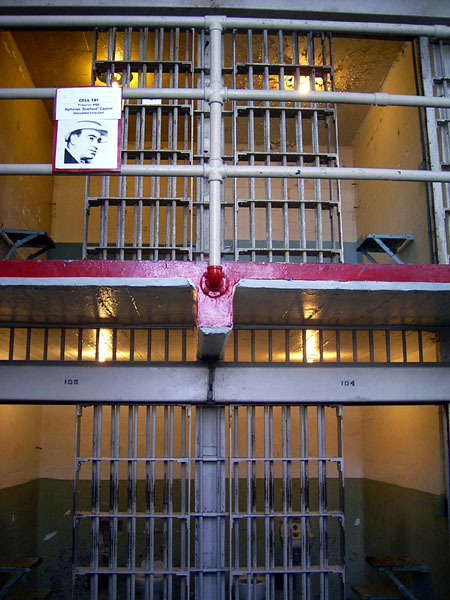 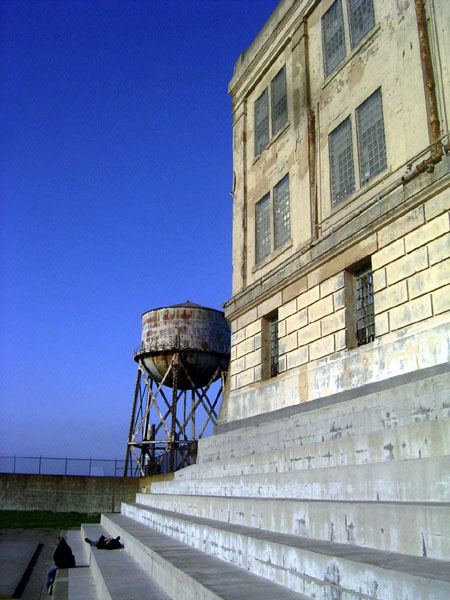 The monster in the back. 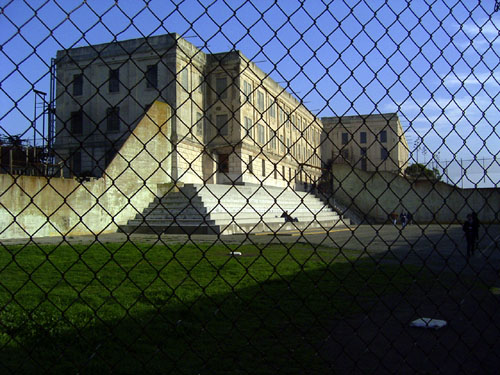 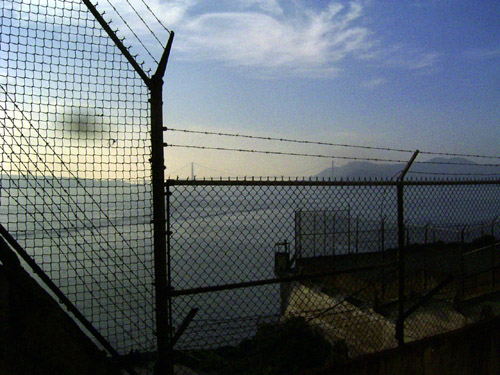 Nice view… but I wouldn’t want to live there. 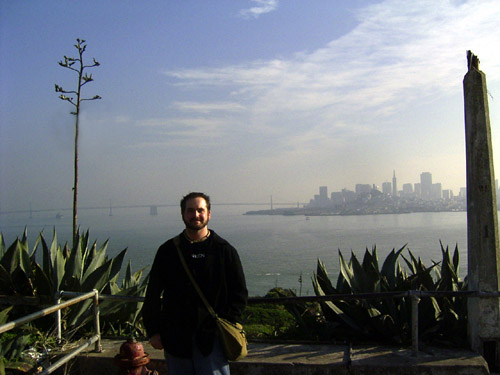 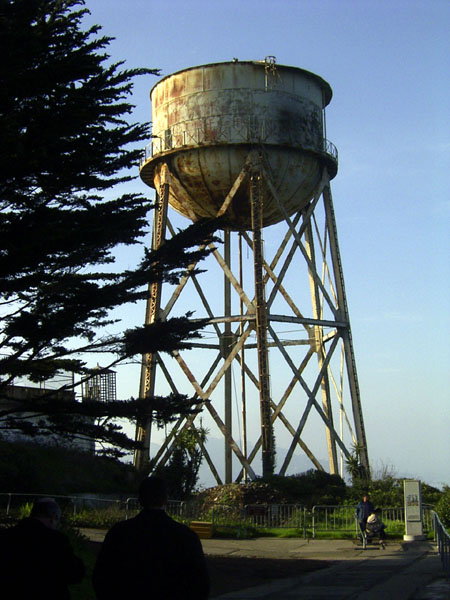 The tour of the island took a couple hours and was great – totally worth the cash. Back on land I tried and failed to beat the sun and make it to Golden Gate Bridge, but not before joining a mass of tourists watching about a bazillion sea lions bark at each other while lying restfully in the Californian sun. Too cool. 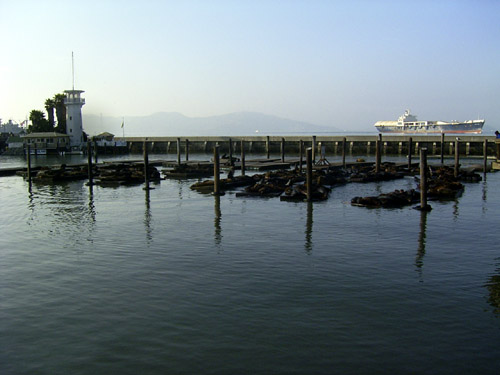 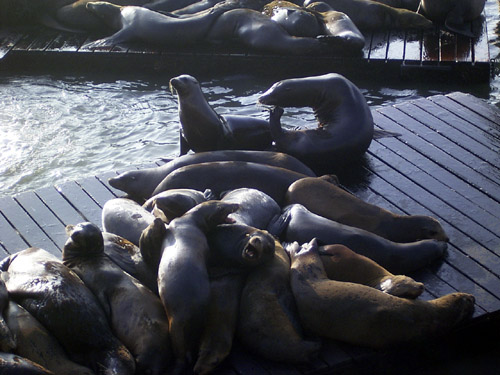 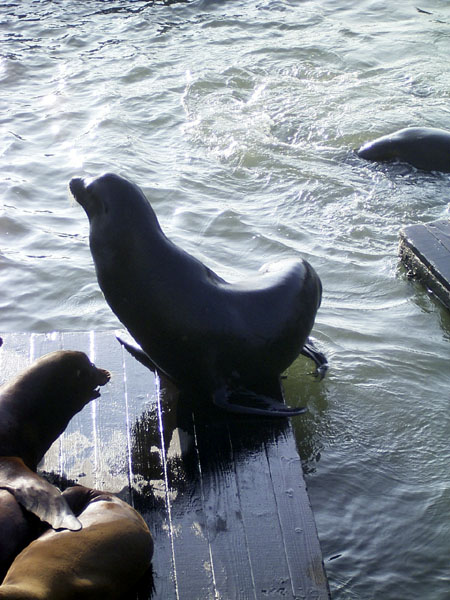 Try as he might, this guy could NOT stay onboard… he kept getting barked off.

So, after trying a bunch of times to find a bus up to the Golden Gate Bridge, I ended up walking most the way there – and so never actually got to see it up close. Tired, and admittedly beaten by the long trek, I scrapped it and found a bus to the last stop on my whirlwind tour of SF – Haight Ashbury. The Haight Ashbury (two streets, for those that don’t know) is sort of what Queen Street in Toronto would be if it was REALLY cool. The area is just loaded with little shops, music stores, Thai food restaurants and various other things you find on a street (homeless people, a guy asking me if I wanted herb – and I am reasonably certain he hadn’t heard of my opting out of bringing oregano). 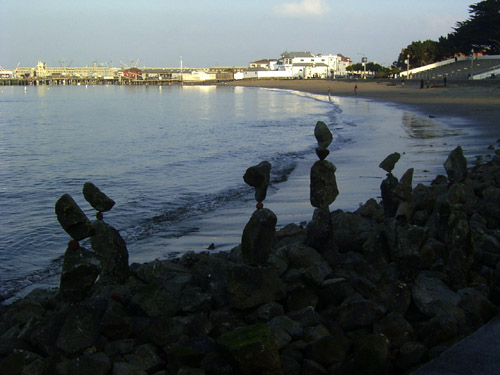 These rocks are all just balanced somehow. I saw the guy doing it, but was on my way to GGB and didn’t want to stop for a lengthly explanation. 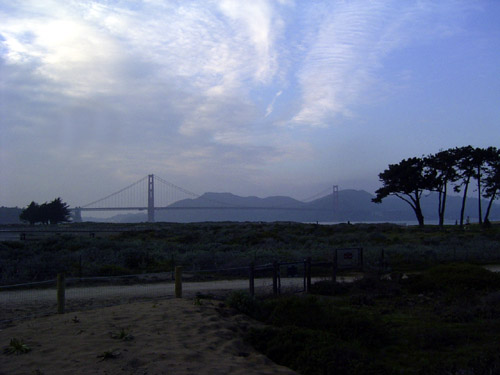 As close as I got. Sigh. 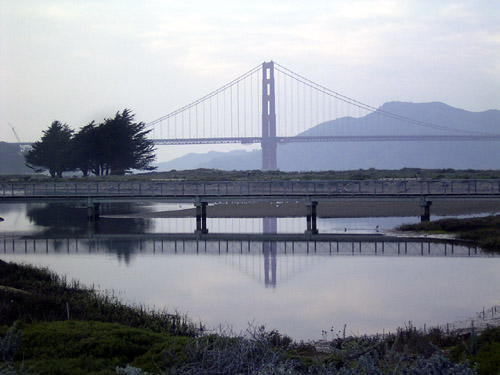 Bit better of a shot. 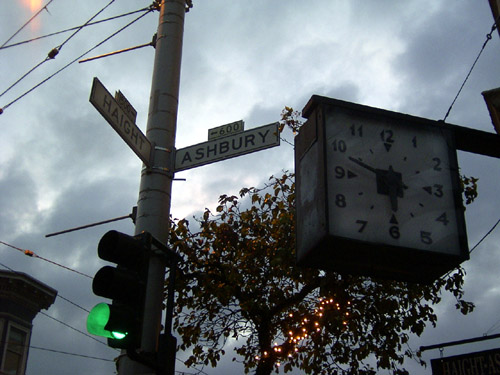 I spent about an hour wandering around Ameba, a HUGE music store, where I contemplated buying about 30 CDs.. and left with none. I then grabbed what I figure will be my last North American meal for a while – pizza – and headed back to the apartment.

When Jeremy got done work Chris and I picked him up down the street and they took me to an Irish pub called Phoenix where I had a pint of Guinness and a Boxty (a potatoe pancake with good stuff on top), my hosts’ gracious treat. I mean honestly, these people put me up for two days and then take me out for dinner? Anyone that fears there is not kindness in the world, look no further than Globalfreeloaders.com, you will find it. 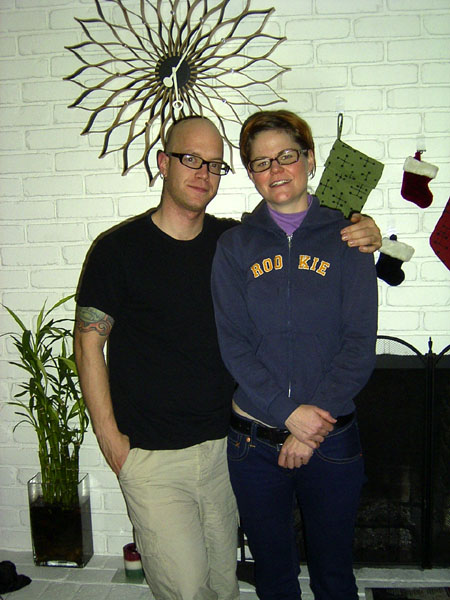 My two, too awesome, hosts and new friends Jeremy and Chris.

So… now here I am, 12 minutes past my scheduled departure time… and not certain if the cab will be pissed about only taking me a few blocks, but it’s raining and a ways down a hill. Anyway, I just got word from Dalian and the school does indeed have an apartment ready for me, so this next day of travel should be pretty breezy, I just get on my planes, get picked up at the Dalian airport and taken right to my apartment… no worries.