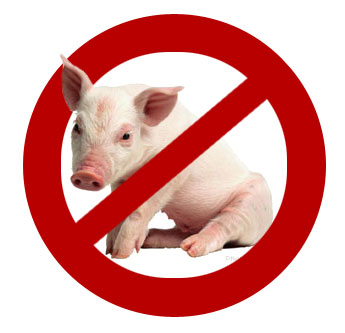 As some may know, Spring Festival is only a couple weeks away (February 18th is day one). It may also be known to you that this coming new year is the Year of the Pig according to the Chinese zodiac.

Well, in weird news of the day – China bans pigs from Year of the Pig TV advertisements. The move, apparently, was made by top party propaganda official Li Changchun to avoid offending China’s Muslim population (namely Hui and Uighur minorities) numbering about 21 million.

Again, for anyone that doesn’t know – Muslims (and Jews – and Christians if they follow the Old Testament closely) don’t eat pork as the pig is viewed as an “unclean animal”. It being an omnivore tends to eat all the crap it comes across (like us humans) and God closely adheres to the “you are what you eat” dictum.

“When governments make a decision about what Muslims want and don’t talk to Muslims, they come up with something completely ridiculous, and here’s what we’ve got.” – Omar Ahmad, Amila.org

I try to imagine what the thought process behind making this decision was and I just can’t come up with it. I can’t figure out how a usually quite insensitive government (particularly to cultures or religions that deviate from the Party line) can twist a historic symbol of Chinese tradition into a very horribly executed attempt at cultural sensitivity. It makes my head hurt the way it does when I think about quantum physics, time travel and spandex.

If it wasn’t pigs, but say Muslims themselves being banned from adverts – I dunno – somehow that would make more sense. Quite a lot more offensive, but easier to understand.

This… well, this just has me at a loss.