This may seem a little sudden, given my habit of discussing virtually every small thing that happens in my life on here. And well, it is sudden.

Maggie and I have been considering getting a better apartment since I visited a friend’s place in town for a BBQ back in September. He, being a lawyer and in a double-western-income family here in China, can afford something much nicer than my modest salary and Maggie’s yoga’ing can – but still, we can do a bit better than the beat-up place we live in now.

My biggest problems with this place is the lack of air-conditioning (hot and cold) in the main living area and the absence of any sort of comfortable seating. This has caused me, in these cold chilly months, to become a bit of a hermit in my heater-on-max bedroom – only venturing out to dispose of and re-acquire food and drink.

The other problem with where we live, in what is called the New District, is we’re well-away (20min/25RMB taxi) from the city centre. Suzhou is basically divided into three areas: 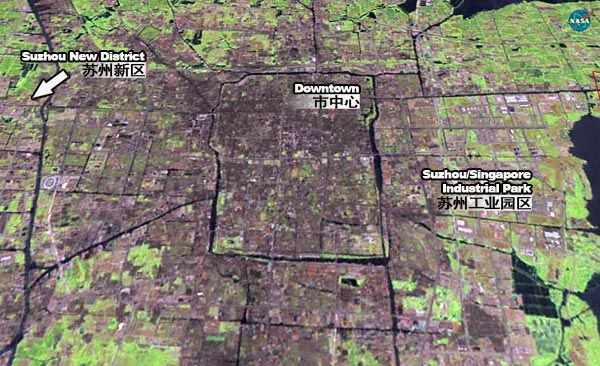 Suzhou/Singapore Industrial Park (SIP) in the west is the most developed, foreigner-flooded part of Suzhou. Needless to say, it’s a pricey place to live.

The Old City/Downtown in the centre holds most of Suzhou’s “cultural” remains and nightlife. Squared-in by a canal that historically guarded the city, it’s where many of Suzhou’s famous gardens are and is generally well-presented and preserved. Though busy and crowded, it’s where most the action in town is.

Suzhou New District (SND) in the east is SIP’s slightly uglier brother. In-and-of-itself, the SND holds its own as a good suburb for the city with a large foreign (mostly Japanese-Korean-Taiwanese) community. A new expensive shopping mall (Emerald City), and a Metro supermarket specializing in imported goods make it a decent place to live. And is where I do, until tomorrow.

The move marks the first time in my two years in China that I’ll be living in a city centre. And as I’ve never lived in big cities but for China, it marks the first time in my life that I’ve lived downtown in any sort of metropolis. Up in Liaoning I started in Jinzhou, a small town just outside Dalian, and then lived in two different apartments in Jin Sanjiao, a suburb about a 20-25 minute taxi ride downtown.

Our new place is a 10 minute walk to the major bar street, we’ll be a quick ride to Guan Qian Street, Suzhou’s premier shopping area. However, the one thing it is extremely far away from is my current school – so, I’ll also be changing schools upon my return from our Thai honeymoon at the start of March.

I’ll be working, again, in an elementary school. It’s one of Suzhou’s oldest, and is held in quite high regard, so hopefully it is a good move. I am going to miss the kids I teach now, but I’ve grown used to that twinge of sadness you get leaving students you’ve taught several times a week for months.

Anyway, I best go pack some things and try to figure out how the hell I’m going to move everything across town. We’ve not enough stuff for a moving truck and too many things for a taxi. Hopefully I can find and bribe an owner of a mianbao che to take us.

And just to recap – in the next month I’m: getting married, travelling to Thailand, having my family visit me in China for the first time, starting a new job, moving and starting a new online business. So, if anyone’s got some spare time to loan me… I could really use it. 😉