Apparently my little home-away-from-home province of Jiangsu is kickin’ ass in green goals met. Thanks to Jeremiah over at The Duck who led me to this China Dialogue article about Jiangsu province setting a shining example for possibly solutions to China’s massive environmental issues.

Jiangsuâ€™s contribution to Chinaâ€™s gross domestic product (GDP) has consistently ranked among the countryâ€™s top three provinces. The provinceâ€™s economic growth in 2006 was 14.9%, Chinaâ€™s highest. Last year, it was also one of only two provinces that met national targets on pollution reduction and energy efficiency.

In 2006, emissions of major pollutants in Jiangsu province dropped by 3.3%, far surpassing the national target of 2%. Jiangsuâ€™s power consumption per unit of GPD also fell by 4.02%, just over the target of 4%.

Four of the six cities that were first awarded the title of â€œEcological Cityâ€ by Chinaâ€™s State Council are in Jiangsu province. All four â€“ Zhangjiagang, Changshu, Kunshang [sic] and Jiangyin â€“ are among China’s ten richest city and county-level economies.

Eighteen cities in Jiangsu have been designated â€œEnvironmental Protection Citiesâ€, one-fifth of the nationwide total and more than any other single province. Yangzhou was given the UN-HABITAT Scroll of Honour Award in 2006. 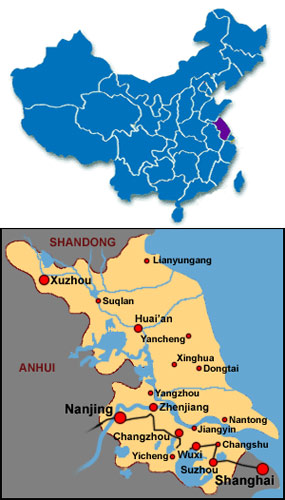 The province is using a number of methods to reach the goals, including emissions trading since 2002, which may spread to other provinces.

Despite the successes, only just over half the residents (polled) in the populous province (about 74 million) are satisfied with the level of pollution control – slightly lower than the national average. One can’t help but wonder if this might be because they have ever increasing standards to base their opinion on.

The article is quick to point out that though this is all good news, the country is not out of the toxic sludge pit yet – not by a long shot. Emissions in other provinces continue to rise, and power consumption has already increased 20% this year.

I keep pushing the thought that China is ripe for leading the way with environmentally-conscientious technology and perhaps even spear-heading the movement and bring it to a workable level. Though I can accept a number of nations (read: most of Africa) possibly hiding behind the “we’re developing, just let us be Greenpeace, it’s not fair…” bit, I don’t think China, with it’s massive economical gains, has got much ground to stand on – and what it does have is looking dingier and dingier by the day.

Whatever happens is likely got a lot more to do with who’s buying who dinners and KTV girls, but regardless, Jeremiah correctly states:

“With all of the doomsday news coming out of China on environmental issues, I thought this story of even somewhat good news worth noting.”