For as long as I’ve been in China I’ve been told, and have told others, that the reason the Chinese language is so impossibly difficult to learn is because of its alphabet of 50,000,000,000,000,000 characters, each strokingly more confusing than the last.

However, I think it’s time to set the record straight. Comparing the number of different Chinese characters to the 26 letters of the English alphabet is a gross misunderstanding of written Chinese.

Though it is true that written Chinese has in around 6,000 “active” characters, to even be considered “literate” in China you need to be able to recognize 1,500 of those. However, we’re not comparing pÃ­ngguÇ’ to pÃ­ngguÇ’ here. 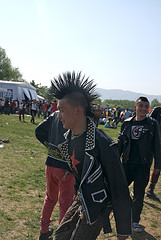 Enter radicals. If you ever half-ass studied Chinese, this was probably the bit you skimmed at the end of the unit.

Radicals, whose moniker is WAY cooler than “alphabet” I must say, are elementary strokes and/or characters that are put together to create characters, and also act as a handy way to classify characters in Chinese dictionaries.

And radicals, unlike their more complicated and numerous offspring, only number 214. Still no 26, I admit, but a lot more manageable.

Now, of course, knowing all these is not going to make you any more literate in Chinese than knowing the alphabet does in English. However, by breaking down characters and getting comfortable with the common parts between them, you gain both a better understanding of how the language works and how to construct it.

You’ll also be able to use that funky index of sticks and dots that separates the English half of your dictionary from the Chinese half – allowing you to look up characters you have no idea how to say.

For more information, check out the China Knowledge Web site’s page on it.