Letter to the Welland Tribune Editor:

Upon reading Corey Larocque’s recent piece on Chinese criminal Lai Changxing being the biggest obstacle in opening the flood gates to Chinese tour groups onto Niagara, I couldn’t help but laugh. Not at Larocque, he’s swell, but at the idea that China’s Approved Destination Status (ADS) is the obstacle.

I’m a Wellander who lives in China and was recently married to a Chinese woman. We are coming home to Welland for the holidays thanks to the benevolence of Citizenship and Immigration Canada (CIS).

That is to say, getting my wife a visa was roughly as simple and noninvasive as deep colon surgery.

In addition to the long and detailed application form, we had to provide six months of banking records and pay stubs for my wife, myself, and each family member we’ll be staying with while in Canada. Also, we were required to submit letters from hers, my, and each of my family members’ employers stating our respective lengths of employment. 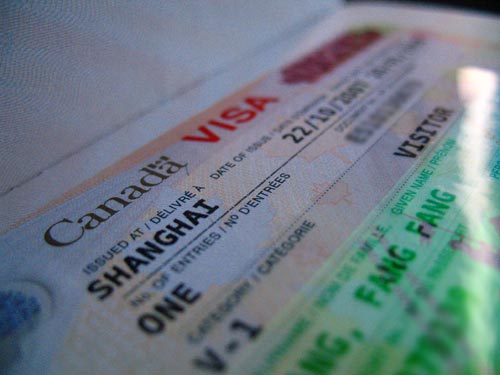 And unlike when I obtained my visa to China via mail from the Chinese embassy in Ottawa, Chinese citizens are required to have an interview in person at one of three Canadian embassy/consulate locations across this massive country – an expensive trip for anyone that does not live in Beijing, Shanghai or Guangzhou.

All of this on the often futile hopes that they’ll get that pretty little lamination in their passport that says they can go.

Of course all of this is because CIS knows that if they are not strict the country will be filled with Chinese nationals overstaying their visas. Ontario’s current minimum wage of $8/hr is more than most Chinese make a day, and on the gritty streets of China, that’s enough to paint Canada’s roads in all sorts of golden hues. ADS or no ADS, this is not going to change. Canada, quite simply, doesn’t trust Chinese citizens enough to freely open their border to the rapidly-rising superpower.

So, though the Canadian tourism industry may be waking with cold sweats thinking ADS is the answer to the lack of Americans crossing the border, until Canada figures out a more accessible visa structure, it’s all but a fever dream.

“Mr. Harper has been cool to China,” Maloney said, pointing to critical comments cabinet ministers have made about China’s human rights record, Harper’s recent visit with the Dalai Lama on Parliament Hill, and a reluctance among Conservative cabinet ministers to visit China.

“These are considered slights by Oriental culture,” Maloney said.

“Liberal” Maloney blaming Harper’s Conservatives for being critical of China’s lack of improvement in human rights (after promises given both for the WTO and Olympic bodies) as well as insinuating that it is somehow wrong that Harper met with the Dalai Lama is just ridiculous. Maloney baloney – if you will.

Now, not to speak for a nation of people, but any man that refers to Chinese as “Orientals” might want to keep his mouth shut lest he reveal the ignorance inside. I can’t believe I lost to this guy in 2004 – a complete lack of campaign or not.