That’s right boys and girls, I’m back in China.

After spending Tuesday at Ree’s school (Freddy and I dusted off our Teacher’s Caps), I caught a late night flight (2 a.m.) from Bangkok to Shanghai, and then flew on from Shanghai to Dalian first thing in the morning. I had thought the ticket was going to run (at cheapest) about 14,000B (divide by 35 in Canada and 5 in China), but Rieng was able to find me a great ticket for only 10,600B – about the same price as my flight from Shanghai, but this time including a flight to Dalian. 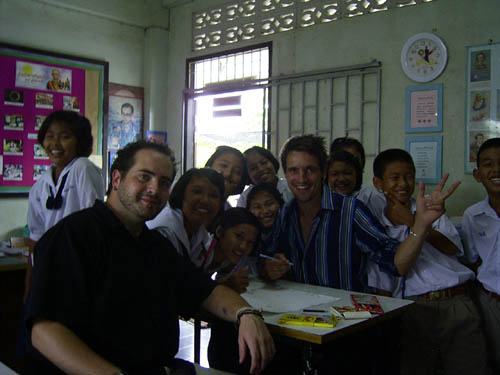 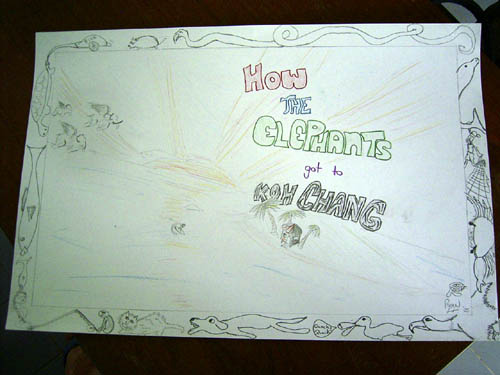 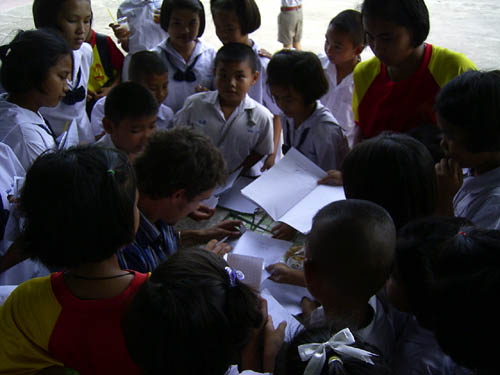 [1] Freddy, myself and a class of curious Thai students. [2] Our masterpiece depicting how elephants got to Koh Chang. Freddy and I were both surprised we had such talent. [3] Freddy doing autographs.
Maggie had informed me the day before that she got a new hairdo and that it was so bad even her parents said she looked ugly. So, a bit aprehensively I met a still very beautiful, funkified girlfriend holding a sign that read “Ryan, This Is Maggie!” at the airport. Funny girl.

We got to the school, sorted out where my new apartment is (about a 5 minute walk to the school. 7-10 back, it’s uphill). It’s pretty centrally located to this part of town and is close to a big supermarket, shops, restaurants, etc. It’s about a 1/2 hour on the bus to downtown (which, ironically, is the same as it takes from Jinzhou), but feels a lot more ‘big city-ish’.

The apartment is cool, has a balcony, a queen-size bed!! (still hard as stone though), a TV in my room, a nice big fridge (my old fridge was about the size of a bar fridge), and some other features I was impressed with, but forget now… Oh! Hot water! (not just in the shower).

I also think I’ve lucked out with a rather cool roommate, incidently also named Ryan. He’s Chinese-American, and other than that… I really don’t know much about him yet.

So, reflections on my trip to Thailand. Well, it was wet, too short and Maggie was absent. I am already planning to correct these things for next time (maybe March?). All and all it was a good time, and it was awesome to see Rieng, Ree, Tee and Khak again. I left Freddy there, and he was planning to head to Koh Phagnan yesterday or today. It was a bit weird saying goodbye to him, as I realized the other day we’ve spent nearly every day together for the past two months. We’re like souls though, so I’m sure our paths will cross again.

It wasn’t as hard saying goodbye to my Thai family this time as my return showed me that it’s not as hard to get back to Thailand as I thought it might be when I left in March 2004. I will still miss them a lot though, and am bummed I’m not going to get to see Ree’s new 1,000,000B car! She buys it next week.

Anyway, I’m back in China, and should soon have Internet at home … so resumes (and in some ways begins) my life in Dalian. When Derrick (www.maskofchina.com/hk) passed the Dalian-blog torch to me back a few months ago, I thought it would be a short-lived reign… but to borrow a VERY overused, yet fitting, cliche… if home is where the heart is… then my home is about three feet to my left watching some strange video at this crappy netbar. And so it would seem, Dalian, also, is my home.

My first eight months here felt like a journey, an adventure. But now, I sense a different feeling, not really residency, as I am still an outsider here, but I just couldn’t imagine being anywhere else right now.