So it is that I nominate a Mr. Paul Trinder for the Dickhead of the Day award.

British Airways has issued an apology to a first class passenger on a flight from Delhi to London last week who woke up to find himself next to a dead body.

The cabin crew had used an unoccupied seat in his row for the body of an elderly woman who had died in the crowded economy section about three hours after takeoff.

Paul Trinder, 54, told the Mirror and Sun tabloids that he woke at 30,000 feet to discover the flight crew strapping the body into the seat near him.

“I woke to see the cabin crew manoeuvring what looked like a sack of potatoes into the seat. Slowly, through the darkness, I realized it was a body,” the businessman told the paper.

“The corpse was strapped into the seat, but because of turbulence it kept slipping down onto the floor â€¦ It was horrific. The body had to be wedged in place with lots of pillows.”

He said the woman’s daughter was also moved up to first class, grieving and weeping until the plane touched down five hours later.

Holy crap, you had to deal with listening to a person cry for a few hours… after THEIR PARENT DIED ON AN AIRPLANE… consider that for a moment. You take off with your family member, you reach cruising altitude, you’re settling into your pack of peanuts and Big Momma’s House II and you lean over to mention how cleverly funny that Martin Lawrence is to find your mom dead.

That’s a horrible situation, and dealing with it in cramped economy quarters could only make it worse. 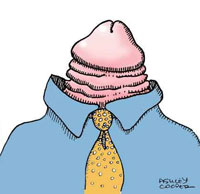 But then this bastard, his high-priced segregation from the proles in the back being disturbed by a dead body and a grieving family member, requires (or at the very least, accepts) an official apology from the airline – for doing the ONLY THING THEY COULD.

Trinder, a BA gold card customer who estimates he flies 200,000 miles a year, said that in the future he will choose any airline but BA when given the opportunity.

Mr. Trinder, my middle finger salutes you. You self-centered twat.