“TV? We don’t need no freakin’ TV… We got Youku!” Such is the unofficial catchphrase of Youku Buzz, an English-language blog put out by one of China’s leading (if not the leading) video-sharing sites–Youku.com.

The Youku Buzz blog, and its affiliated Twitter stream, was created to act as a bridge between the mostly Chinese content and English-speaking world. Youku Buzz blogger Kaiser Kuo explains: “The idea to do something like Youku Buzz came to me right after I was approached last summer by Youku’s CEO and founder, Victor Koo, to help out at the company.”“I’ve been a journalist (for Red Herring) and I’ve worked in a big ad agency (Ogilvy), and I realized it’s the case here in China that key people at English-language news media, agencies, and advertisers alike are often non-native Chinese speakers who are still a lot more comfortable working in English. It’s not that they don’t read or speak Chinese; most do, but it just takes a little more time and effort. It occurred to me that making Youku’s amazing content more easily accessible to these people would help raise the company’s profile with the western press and bloggers, with agency folks, and with multinationals who are potential advertisers.

“The blog and Twitter stream act as an aggregator of sorts, whereby Kuo and his fellow blogger Steven Lin (aka “Flypig”, one of China’s first podcasters, and former senior editor at Sohu) pick out contemporary and classic Youku videos they find interesting, funny or otherwise relevant. Videos like this gem, from a Buzz post entitled “I love you so much I’ll freeze my nipples off“:

But it wasn’t until I was on holiday last week that my need for China-based online video came to an apex. I was stuck in a hotel room for seven days without anything but basic cable. In China, this translates into approximately 64 billion talkshows, 28 billion Dynastic dramas and CCTV9–the nation’s only English-language channel which works tirelessly to broadcast the most boring content on the planet.

However, with a high-speed Internet connection and Youku (with its rather liberal upload policies), I was saved the pain of watching yet another documentary on the history of Chinese caligraphy.

My new-found Youku affection led me to explore the Youku Buzz blog a bit deeper. To help me out, Kaiser was kind enough to take the time to answer a few questions I had.

How did the two of you get involved? Was the idea presented to you, or did you say to yourselves, “you know what Youku really needs…”, and pitch it? 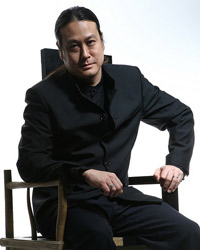 [Youku founder and CEO] Victor and I go back quite a long way: He was an adviser to an Internet company I worked for back in the late 1990s. I interviewed him maybe a half a dozen times while he ascended the hierarchy at Sohu from CFO to COO to president, and he even broke the news that he was starting an Internet video company to me in my capacity as a journalist. I should note that I was really skeptical when he told me: Tudou was already on a roll, and there were as many as 200 other Internet video sites already in operation in China. But he kept on surprising me, and by the end of 2007, I was convinced that Youku was the horse to bet on.

When I signed on as a consultant in July, Youku had already decidedly passed Tudou in terms of total time online, and had edged the latter out in video views as well, but still, Youku wasn’t getting nearly the attention in the international press that Tudou was. That, we feared, would translate into a leg up for our chief competitor when it came to attracting major multinational ad clients, and that was the first problem I was tasked with addressing.

I knew I’d need help, and I could think of no one more qualified than Steven. As a pioneering podcaster (he co-created the podcast Antiwave, or ??) and an amazingly bilingual all-around-cool guy who was really tuned into technology, popular culture, and media, I had to have him, so I worked pretty hard on recruiting him. Anyone familiar with him and his work understands what a coup it is to get him here from Sohu into the role of manager of international PR.

Steven and I were very much on the same page when it came to how to raise awareness of Youku. We were both deadset against traditional press releases and pestering phone calls to journalists; instead, we wanted to take a genuinely Web 2.0 approach to it. Hopefully, it’s working!

I see you guys have ChinaSMACK blogrolled, and I can’t help but draw a few comparisons between the two blogs’ bridging of contemporary Chinese culture to the English-speaking world. Where would you say the similarities are, and where does Youku Buzz differ?
Steven and I both really love ChinaSMACK, and we think it’s a terrific service. We’re both very much in the bridge-blogging mold, as you point out, and I think to some extent there’s a shared mission.

ChinaSMACK runs to the more sensational, of course–there’s often pretty gory or prurient content on there, and they love the edgier, racier stuff. Obviously, since the idea here with Youku Buzz is to attract and not repulse would-be Youku advertisers, we’re not going to highlight content that’s too controversial. But at the same time, we need to keep it interesting and useful to the bloggers and journalists who are another important part of our readership.

Another difference is that we are, of course, limited to video content that appears on Youku. That’s not such a bad limitation, though, since no major event, sociological or cultural phenomenon, or weird feature of the Chinese Internet landscape fails to make its way onto Youku at some point!

It would be great if we could spend more time at it; right now on the International team it’s just the two of us; I’m only a part-time consultant at Youku, and both of us have other resonsibilities at the company, too, so we can’t take the time to translate all those user comments like the ChinaSMACK team does–one of the great things about that site!

How much fun is it that you guys get to blog about goofy videos?
It’s way too much fun. Not only do we get to blog about goofy videos and exercise the snark muscles, we get to see all these sometimes stupendously well-done and sometimes astonishingly lame videos before most other folks, too. We spend a lot of time just laughing and enjoying ourselves, sharing links back and forth among ourselves and other folks around the company. Youku’s culture really encourages all employees to immerse themselves in Internet video, which helps make it a really fun place to work. Everyone executes well, but no one’s burned out from overwork.

Though the main site’s content is Chinese-language only, it’s not difficult to navigate the site even if you are not fluent in Mandarin. Many videos (from movie trailers, music videos, feature-length films and TV shows) can be searched by their English names.

That said, for the more timid of Chinese characters, or just anyone searching for an interesting read/watch, Youku Buzz provides an invaluable window into the Chinese site, as well as contempory Chinese culture.