I have a vague memory of being a kid at school and going outside during class time to witness a solar eclipse. But other than that fuzzy moment, I’ve never witnessed a solar eclipse before.You might imagine then the sense of excitement I have about this Wednesday, July 22, when the longest total solar eclipse that will grace our planet this century comes to my dear Suzhou, China. 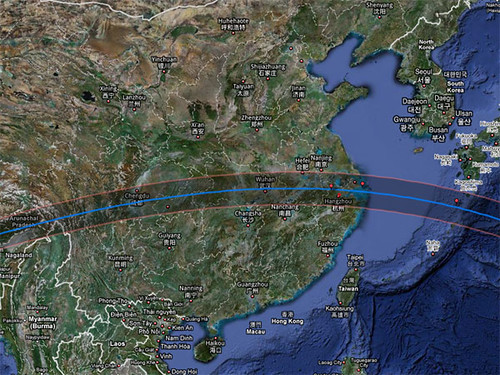 The path of the eclipse as it crosses over China 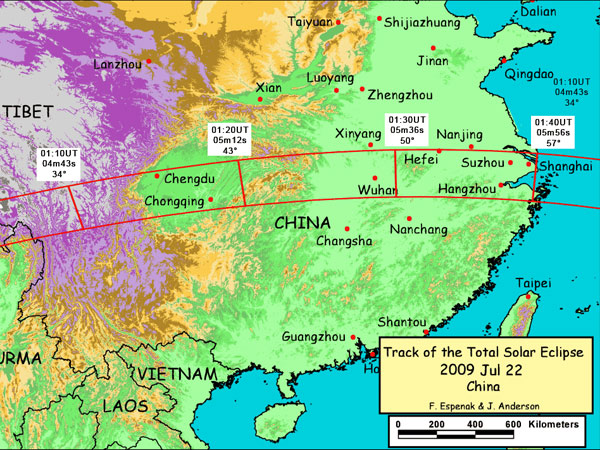 The eclipse will begin just shortly before 8am and will end around 11am–with the total eclipse lasting (long by eclipse standards) more than 5 minutes. You can check this excellent NASA/Google Maps mashup for the exact times in your location. Simply click the map and it will create a marker with the start and end times of both the partial and total eclipse.

For easy reference, here are times for some of China’s major cities in the path of the eclipse (all times in China Standard Time/+8UT):

Of course, it’s important to remember that if you value the ability to see, you cannot view the eclipse without special glasses. Sunglasses will not do the trick. I’ve noticed here in Suzhou most of the small shops are selling eclipse glasses for 8-10 yuan.

For more traditional ways of viewing the eclipse, if glasses aren’t available, get a bucket of water and put some black ink (which can be bought for calligraphy at any Chinese stationary store) in it, then view the eclipse via its reflection. A slightly more “science guy” approach can be found here.

And finally, for any photographer looking to shoot the eclipse, be sure to check out “How to photograph a solar eclipse“, by Fred Espenak. Basically, you should have a Solar Filter, a darn decent telephoto (300mm+) or an attachment to a telescope.

Now, let’s all pray the weather report is wrong, and it won’t be rainy here in Suzhou/Shanghai that day–oh, and that it won’t bring about massive earthquakes (fingers crossed).