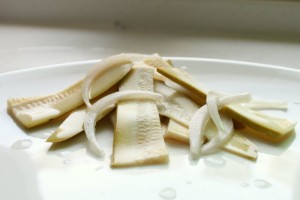 Much like my prior post on preparing home-made sauerkraut, this is another “I can’t believe how simple it is” recipe. It’s also another no-cooking recipe for the Home Cooked category.

Chinese supermarkets are no stranger to pickles. In fact, it was only after moving to China that I really examined the term “pickle” and realized it doesn’t always mean “pickled cucumber”, as I had erroneously grown up thinking. However, getting your standard jar of crunchy dills can be a bit of a challenge. Supermarkets usually only carry one or two kinds of pickles and they tend to be both expensive and not to my tastes.

So, when a friend in Dalian mentioned he was making some Bread & Butter pickles, it got me curious about making my own. One problem — no cucumbers. What I did have, however, was a zuchinni hanging out in the fridge that was eager to be put to use. I had briefly read somewhere that zucchini can be pickled similar to cucumbers, and so decided to give it a shot.

To be honest, my expectations were quite low that things would turn out very good. As such, I was a bit half-assed with the recipe, eye-balling most things. The results were pleasantly surprising though, so as best I remember, here’s what I did:

Virtually all recipes for pickles are a much longer process, but the overnight thing worked a treat. I tried the pickled zucchini the next day and it tasted great. It’s inspired me to try a few different combinations of the above — namely using more dill and a bunch of garlic, oh, and cucumbers! (Kool-Aid pickles anyone?) As I mentioned above, I was pretty slapdash with the recipe, and so relied a lot on tasting the pickling liquid to get it to a flavour I liked. If you follow my footsteps, I suggest doing the same. More salt, less sugar, etc.

If anyone has any advice or experience, it’s always much appreciated. I’ll look for it below.