Mounting Christmas Expecations have been something that consistantly foil even the best intended Christmas celebrations year after year for me. I think the problem is I’ve just learned to induce such a build up in the days leading to the big day, that when it actually arrives, happens and departs I’m left with an “is that all?” feeling.

Granted, these last couple years have withered my Christmas expectations a bit, as well as prepared me for the mix of emotions that come with being away from your friends and family over the holidays. And though not completely able to avoid the melancholy, I have learned to prepare for it.

So it was I went into my Christmas plans yesterday. The day started off rather slow and sluggishly as I drank half a brewery’s worth of cheer at the Future School Christmas Party the night before. Maggie and I got up and exchanged our gifts while sipping some homemade (and noticably missing vanilla) egg nog, and then had a lovely breakfast of french toast and sausage.

Things got a bit stressful when I decided I wanted to buy myself a new camera, rightfullying thinking it would be much easier to justify the expense if it was bought on Christmas day. Maggie and I went to Olympic Square, but didn’t find the Canon A620 that I was looking for. We ran into Walmart and grabbed the chicken for dinner I had promised Adria I would bring (settling for the already roasted kind, as it just looked and smelled better – despite the stickers on the fresh whole ones that claimed they were bird flu free) and then headed over to an Electronic City by Carrefour that I knew had the model I was looking for. Once there, I tried to use an ATM to get the money I needed out of my Chinese bank account… but sadly I couldn’t remember my pin, and after trying every combination I could think of, I hung my head and accepted I was not meant to have the camera today…

In mixed spirits, we were off to Adria’s for Christmas dinner. I really didn’t know how this day would turn out, as I sort of assumed everyone would have their personal feelings of how Christmas should be held, and that would lead to conflicts – but it didn’t. Kudos to Adria and Victoria for whippin’ up some amazing grub, and a shout out to James for his wheaton bread (no relation to the dog I once had, I checked) and mulled wine. I was well impressed with the spread. We had:
Roasted Chicken
Stuffing
Roasted Veggies
Mulled/Red/White Wine
Roast Potatos
Mashed Potatos
Salad with Vinegrette
Green Peas
and homemade Cookies, Pie and Fruit Salad for dessert.

We topped off the dinner with a few more drinks and a watching of Rudolph The Red-Nosed Reindeer and How The Grinch Stole Christmas that I managed to burn onto VCD. All a bit run down from the night before; Cam, Maeve, Erin, Steph (who lives in my old apartment in Jin Zhou!), Maggie and myself all headed back to Cam and Maeve’s place to do our Secret Santa. 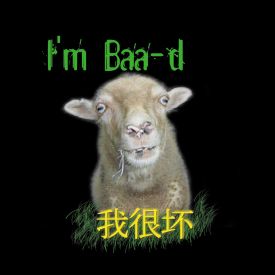 I got Maeve, so after racking my brain about what to get her, I decided to make her a t-shirt as a bit of a souviner from China. Maeve has become a legend in our group for having done an amazingly BAAAD version of Michael Jackson’s Bad at KTV one night, so I found a place that could print a t-shirt of the following graphic I whipped together in Photoshop. [Click On The Photo To See Maeve’s Amazing Singing!]

Despite Cam stating repeatedly that she got really lame gifts for her Secret Santa, I was well impressed with the things she got Maggie and I. There was a definite theme of photos and frames, but that’s great, as it’s looking more and more like Maggie and I will be getting our own place come March, and it’ll be nice to have some photos to put on the wall and stuff. She also got us his and hers mugs, and me some much needed gloves. And breaking the Secret Santa concept, Maeve got me a really cool Mao-era communism poster… tres cool.

So, all in all, even with the unrealistic expectations that the holiday-buildup brings, I really feel like I had an excellent Christmas. Of course I still missed my family lots, and have made some silent vows to try desperately to be home next Christmas, but I must thank the friends I’ve made here in Dalian for taking what little Christmas spirit there is here in China and finding a way to amplify it to a level that left me feeling all warm inside… though that might have been the wine.