Gawd, the amount of misplaced search engine traffic I’m going to get from that… 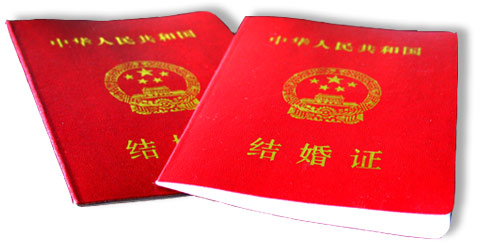 So, it’s done. I’m – in the eyes of the People’s Republic of China – married. And here’s the kicker: how many people do you know showed up for their marriage unshowered, unshaved and not having brushed their teeth? Well, to be fair, how many people propose over shredded cow tongue… apparently, conventions are not my strong point when it comes to marriage.

Anyway, just to be clear, this whole “marriage” thing is only a legality. Though it’s been a bit of a trip calling Maggie è€å©† for the last couple days, we’re both committed to preserving the idea that our “marriage” is the ceremony in February. The reason we did this now was because when we do actually get married, we wanted it to be official, and as planning the ceremony is an exercise in patience like I’ve never experienced before… we just wanted one less thing we had to worry about.

Turns out we chose a great day for it – as Monday was a collision of good luck days between the Western and Chinese calendars. It being the 18th of December and the 28th day of the 10th month respectively. Both 18 and 28 (or indeed any number with å…« in it) are considered lucky because å…« sounds similar (in a rather abstract way) to ç™¼. This led to people all over China using Monday as their wedding day (a photo from the Nanjing marriage office). And here Maggie and I just showed up, oblivious to what other couples likely spent months preparing for.

We were also saved the hardship of any long lines. We arrived to an empty office, and were later joined by just two other couples. I was amazed at the coincidence that both couples were also foreign/Chinese pairings. Amazed until Maggie later explained that we were at a special office just for foreigners marrying Chinese. Yeah, not the sharpest toothpick of the bunch, me.

The rest of the time in Dalian was also excellent, despite being short. It was great to see my buddies Gabriel and Rick again. Them being two of the few remaining friends I have left in the city. Transient friends kinda suck that way.

In case it is useful to anyone: