Ok, between the TAM Sq. post and the Google post… I’ve hit on a couple controversial topics this week. Looks like the former at least, had an effect on the ability of people to access this site. This has made me consider what exactly goes into banning something in China.

This is to open up the dialog on the whys and hows. If you know stuff about it, please comment. My knowledge of it, though limited, is thus: Claims that a particular site (unless you’re a well-known human right’s group or FLG page) being banned are kinda screwy. However, blocking a range of IPs of say a blog provider, is much more likely (Blogger’s Blogspot and Blog-City.com are two that come to mind). This is why Wikipedia is banned in China. I don’t think the powers that be particularly care about the English version of the site, but the user controlled information spewing out in Chinese at the Chinese language page of Wikipedia was a problem. Unfortunately for both, they’re hosted on the same networks, causing a blanket ban on Wikipedia in the Middle Kingdom.

I went around this, and don’t post my blog at a free blog host, but on a paid server. So why over the last few days has my blog been tough to reach in China without some anon software on? I think, and I’m really not certain about this, that local Internet Service Providers (ISPs) have software on their servers that monitor the information being pulled through them … if keywords popup a bit to prominently, the site gets stopped and a “No data” or related error is given to the user.

Hence the wording in my June 4th post’s title might have tripped it up. Remove the post (I’ve got my blog set to a five post max on the main page now) and æ²¡ä»–å¦ˆçš„é—®é¢˜!

I sort of wish that I had software like MSN China’s blogs do, telling their users, “This message contains a banned expression, please delete this expression” if they type words that you might expect would give the central gov’t a rash. 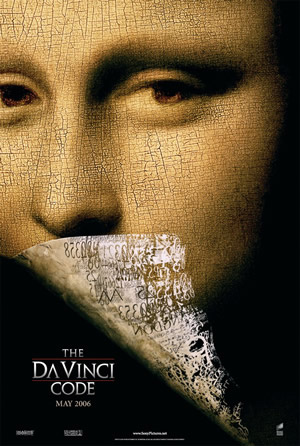 In other banning news, Chinese authorities have announced that The Da Vinci Code has been banned in the Mainland. They’ve been unclear as to the why though. As it was well on its way to being the highest grossing foreign film released in China, speculation varies on what the basis was for the sudden announcement for immediate removal from all theatres on Thursday.

Chinese authorities said the withdrawal — an unprecedented move — was to make way for local Chinese movies, a movie company executive said Thursday, declining to be named because she isn’t authorized to speak to the media on the matter.

“This is coming directly from the Film Bureau,” she said, adding that it’s the first time the government has pulled a foreign movie from theaters. – China Daily

As banning means complete denial that the movie even exists, ‘making way for Chinese movies’ is a bit of a bunk answer. Movies, of course, go through rotation – but this movie isn’t just being removed from theatres because it’s had its turn – it’s being wiped from the collective minds of the country. When a movie is banned, it’s not played, sold, discussed… (you will, however, still easily be able to buy the pirate DVD – some industries are untouchable).

There’s little chance that the cries from China’s Christian associations have been so loudly heard that the gov’t would react to them and ban the movie, but as Angry Chinese Blogger speculates (with merit, I think), it might be that the ideas in the movie are having too much of an effect on the population. Making them question the idea of secrets, cover-ups, conspiracies, religion, etc.

Like why Google works sometimes and my site displays sometimes… it joins my growing number of questions as to exactly what goes into getting (or avoiding being) banned.