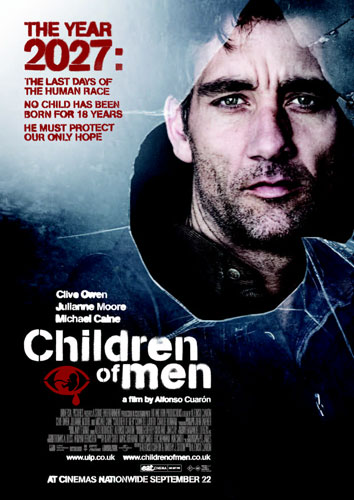 There's just something more "real" about British future-world/post-apocalyptic movies. I think it's the drab, muted colours of the country itself that lend a very plausible tone to the films. Logan's Run, 1984, A Clockwork Orange, Brazil, 28 Days Later and now Children of Men are all movies I enjoyed greatly and I am a man that loves his post-apocalyptic movies. Hell, I've watched both Waterworld AND The Postman more than a couple of times.

I just love that whole idea of transformation and beginning anew against adverse conditions. It's also likely why I'm a sucker for deserted island movies.

The film is set 20 years from now, and begins on the day the youngest human in the world is killed – he was 18. No one is sure why, but humanity is now unable to reproduce. Seeing the horizon of their existence, the world has fallen into chaos; all but the embryo of modern civilization, Britain – well, almost. Massive floods of immigrants are causing a rampant nationalistic xenophobia among the locals, and the "fugees" (refugees, not Wyclef and Lauryn) are being rounded up into familiar-looking concentration camps. Like any good sci-fi movie set in the "not so distant future", we get a dose of our world's fascistic past and just a touch of modern hypocrisy.

Children of Men casts likes of Michael Caine, Julianne Moore and Clive Owen (at his I'm-just-as-talent-but-better-looking-than-Nic-Cage best), was directed by the rather in-demand Alfonso Cuarón, and is out widely across Europe. The movie is fantastic and I highly recommend you see it. However, should you be North American, you'll have to wait until shortly after Christmas – unless you live in China that is.

Gawd, I LOVE the lead-up to the awards season. For most of the year if I want to buy a new movie on DVD it is a complete gamble on whether it will be a crap camcorder/theatre job or a high quality copy from a DVD. But this time of year all the Fall dramas hit the cinemas and almost at the same time review copies hit the living rooms of awards judges for their consideration – and mine. I would like to take this opportunity to thank the Academy … I'm going to go watch The Departed.