Alright, normally I would tackle Chinese current events commentary over at Lost Laowai, but as I just wrote a post there on the stupidity of the Carrefour boycott, I figured I’d spread the

It seems I’ve had nothing to say lately but for commenting on the waves of stupidity surging higher and higher as the Olympics draw ever nearer. I wish I could say it was because I’m a cynical dick that likes to focus on such things (I am), but really… it would appear there’s NOTHING else going on in the world.

So, the latest is Grace Wang. Wang, a Chinese student at Duke University, has quickly become the poster child for the [*tib*] protests – lauded as the Great Yellow Hope by Western media and scorned as the “Most hideous Chinese student abroad” (according to CCTV, China’s national television station) here at home. 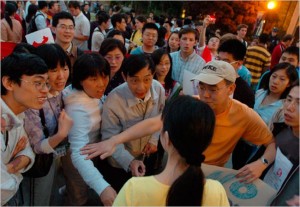 And what did Grace do to deserve such attention? Stood her ground against her compatriots. Last week when the torch travelled through San Francisco, protests were held around the US. Split between people protesting to free [*tib*] and the hordes of Chinese out waving the PRC flag to show their support for their homeland.

Grace, it would seem by happenstance, walked into the middle of the fray and attempted to negotiate cooler heads and real dialog. Something mobs are prone to do – that and listen to reason.

For her involvement she was immediately branded a race traitor, had her picture and personal info (address, phone #, parents’ address) smeared across the net. Her parents home in Shandong was pelted with rocks and she has been threatened and warned never to return to the Mainland.

Now, there’s and endless number of conflicting reports about Grace, and it’s impossible to decipher the real from the raunchy. But Grace’s story isn’t really about Grace. It’s about what happens when you break from the hive.

Grace isn’t standing up and shouting that [*tib*] should be free. She’s simply voicing her opinion that both sides need to cool the fuck down and talk about things. Sadly, that’s just not acceptable. Apparently, when you’re Chinese you either side with the crowd, or go to hell.

Now, I’ve written lately about the mishandling by Western media of news about China and the whole [*tib*] thing, and feel pretty damn strongly that China got the short end of the stick. When people are talking stupid shit, you’ve got ever right to be upset about how the country is being mis-labeled (with headlines) to the world.

China was given the moral high ground. It was handed to them. And what was done with it? They shat on it like it was Grace Wang’s parents’ doorstep.

Seriously. Yelling nationalistic slogans with your arms in the air and denouncing the first Chinese to stand up and speak her mind (as opposed to her nations), and speaking reason no less, is not the best way to illustrate to the world that China isn’t the brainwashed, stormtrooping, Red Guard of yester-year.

If China wants less criticism from the world and wants to dim villainous spotlight from the global stage, then it’s going to require a bit more than simply demanding it with a fist and flag in the air. To borrow from Ms. Wang, “take away your anger, and your heads will become clear, your minds will become sharper, and then your judgments correct (æ¶ˆé™¤æ€’æ°”ï¼Œå¤´è„‘æ‰ä¼šæ¸…æ™°ï¼Œæ€ç»´æ‰èƒ½æ•æ·ï¼Œå†³æ–­æ‰ä¼šæ­£ç¡®).”

N.B.: The one great thing about all of this lunacy is that despite all the Chinese uber-nationalists that fill their fragile egos with pseudo-patriotism, there seems to be a growing number of Chinese that are showing the maturity and confidence to not allow Western bias offend them personally, and illustrating the intelligence to discuss it all with thought and pause.