It was Maggie’s birthday on the weekend. Actually, it was last week sometime. She turned 27. Wait, no it was 28.

Despite what you may think of her husband, I am not as inconsiderate as may be gleaned from the above collection of confusion. You see, Maggie’s Chinese (for those not following along), and as such she is caught in that horrible limbo of Eastern tradition verse Western practicality.

For some cruel reason there are two calendars widely used in China. Like most Chinese, Maggie uses a migraine-inducing mix of dates from whatever calendar suits best for the moment. Getting paid, use the Western (Gregorian); planning Spring Festival, switch to the traditional Chinese calendar; May holiday, Western; Mid-Autumn, Chinese; work week, Western; birthdays, Chinese…

God forbid that the Chinese you’re trying to plan things with speaks a bit of English, and then you’ve got them calling months of the Chinese calendar by their Western counterpart. As Chinese months (in either calendar) are simply denoted by a numeral and the word “month“, it can become quite confusing when people start saying ‘this year has two Augusts’.

Further mix into this the sexagenary cycle with its seductive title and curiosity piquing “heavenly” and “earthly” branches, it’s easy to see why one might get frustrated by the whole damn thing.

As I usually do when I’m confused, I decided to see what Wikipedia had to say on the matter.

With the introduction of Western astronomy into China via the Jesuits, the motions of both the sun and moon began to be calculated with sinusoids in the 1645 ShÃ­xiÃ n calendar (æ™‚æ†²æ›¸, Book of the Conformity of Time) of the Qing dynasty, made by the Jesuit Adam Schall. The true motion of the sun was now used to calculate the jiÃ©qÃ¬, which caused the intercalary month to often occur after the second through the ninth months, but rarely after the tenth through first months. A few autumn-winter periods have one or two calendar months where the sun enters two signs of the zodiac, interspersed with two or three calendar months where the sun stays within one sign.

Please take some chopsticks and kick them into my skull.

Now, if through some amazing feat I get her birthday nailed down, there’s still a question of how old she is. The Chinese, as a bit of a reward for being the lucky one and dodging a trip to the trashcan, award you with a year’s worth of age the scream-induced second you pop out.

Further, as most Chinese (Confucius knows why) simply count themselves a year older come Spring Festival, if you happen to be born just prior to the new year, you instantly become two years old. 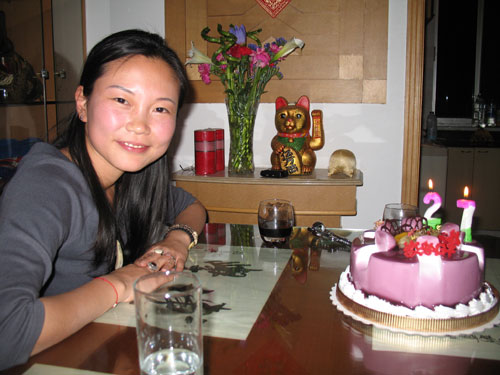 Fortunately, Maggie’s not in the second group, so only has a mildly retarded age calculation.

And so it was when ordering her cake and asked how old she was, I simply shrugged and asked how many number candles they could throw in.

We ended up with a “2” and a “7”. This happens to match her age going by the Western system, so we went with it – celebrating her birthday on the proper Chinese calendar day, of course.