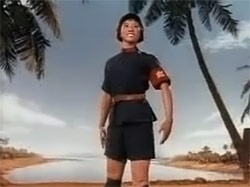 While later today Canada will be celebrating its own anniversary with fireworks, BBQ and a whole lot of drinking; in China it’s all about the Communist Party of China’s 90th anniversary.

Not one to shy away from the spirit of things, I figured it was an excellent time to showcase one of Hainan’s most well known group of folk heroes — the Red Detachment of Women — best known for the series of ballets their story has inspired.

The Red Detachment of Women (simplified Chinese: çº¢è‰²å¨˜å­å†›; pinyin: HÃ³ngsÃ¨ NiÃ¡ngzÇjÅ«n) is a Chinese ballet which premiered in 1964. It is perhaps best known in the West as the ballet performed for U.S. President Richard Nixon on his visit to China in February 1972. Adapted from the earlier film of the same title under the personal direction of Zhou Enlai, which in turn adapted from the novel by Liang Xin, it depicts the liberation of a peasant girl in Hainan Island and her rise in the Chinese Communist Party.

The novel was based on the true stories of 100+ member strong all-female Special Company of the 2nd Independent Division of Chinese Red Army, first formed in May, 1931. As the communist base in Hainan was destroyed by the nationalists, most of members of the female detachment survived, partially because they were women and easier to hide among the local populace who were sympathetic to their cause. After the communist victory in China, the representatives of the surviving members were taken to Beijing and personally inspected and praised by Mao Zedong. Most of these surviving members currently reside in the city of Qionghai (84 survivors in 1994, 23 in 2001, 14 in 2008).

That Hainan’s most well-known and loved revolutionary heroes are a group of women is not at all surprising to me. The simple truth is that by China-wide comparison, Hainan men have to be the laziest bunch of y-chromosome carriers in the country. The women here are work horses, and are more often the ones you see doing the most physical of labour while their husbands and brothers sit in the shade of a nearby palm.

A case in point — a road was recently just built along the northern edge of the island district I live on. Now nearly finished, it provides a great view of the Qiongzhou Strait that runs between Hainan and the mainland. For three months I’ve watched the transformation of the road from a dirty construction site to a palm- and flower-lined street that’s great to wander down. And in that time I’ve seen women do virtually all the heavy manual labour while the male positions seemed limited to operating the large crane for hoisting up the palm trees (the women did all the tree positioning, hole digging and planting) and standing and staring supervising.

Interestingly enough, along this same stretch of road is a monument to the Communists resistance/defeat of the Nationalists here (there’s no actual mention on the monument of “who” was fighting — but it’s obvious from its absence that it relates to the Chinese civil war).

So happy anniversary CPC — may the next 90 be much better than the last.

You can watch the whole ballet/film for the Red Detachment of Women here.