Big tip of the hat to my friend Tom for suggesting I give War On Democracy a watch. The fantastic film by award winner John Pilger aptly displays the American government’s involvement in manipulating Latin America’s leadership over the past 60 years or so.

Nearly half of the film is spent exploring the topic of Venezuela and includes frank commentary with the country’s president, Hugo Chavez. Chavez, for any unaware, has been in a bit of a hotseat with America over the past decade or so, as he isn’t buying what the “Empire” is selling and that ALWAYS pisses Washington off.

An unabashed socialist, Chavez has thrown out American control in Venezuela, and has gone a long way in convincing his neighbours (Bolivia, Argentina, etc.) to do the same. He even went so far as to call Bush “the devil” to applause at the UN General Assembly.

Though Western (Northern?) media is quick to vilify him, and “good” Christians call for his assassination, it’s hard not to admire the guy. I just read his profile on Wikipedia, and for a sight that generally tries to list the good with the bad, the “bad” was tough to come by. I mean, he had the good sense to kick these nuts out of his country – that was enough to win me over.

But more seriously, he’s introduced a series of Bolivarian Missions, which summarize as follows:

ChÃ¡vez’s domestic policy relies heavily on the “Bolivarian Missions,” a series of political campaigns aimed at radically altering the economic and cultural landscape of Venezuela.

The “Bolivarian Missions” have entailed the launching of government anti-poverty initiatives, the construction of thousands of free medical clinics for the poor, the institution of educational campaigns that have reportedly made more than one million adult Venezuelans literate, and the enactment of food and housing subsidies. The infant mortality rate fell by 18.2% between 1998 and 2006. The government earmarked 44.6% of the 2007 budget for social investment, with 1999-2007 averaging 12.8% of GDP.

The Missions have overseen widespread experimentation in what ChÃ¡vez supporters term citizen- and worker-managed governance, as well as the granting of thousands of free land titles, reportedly to formerly landless poor and indigenous communities. Several allegedly unused estates and factories have been expropriated to provide this land.

In March 2006 the Communal Council Law was approved, whereby communities that decide to organize themselves into a council can be given official state recognition and access to federal funds and loans for community projects. This skips the local and state governments that are perceived as corrupt.

The Chavez government also passed a number of laws protecting the rights of the indigenous people of Venezuela, including laws that recognize indigenous rights over the land they traditionally occupied, their rights to prior consultation concerning the exploitation of their natural resources, their rights to manage their own education system based on intercultural and bilingual principles, and a law providing that three native representatives shall sit in the National Assembly, as well as representation in municipal and regional assemblies in regions with a native population. – Wikipedia 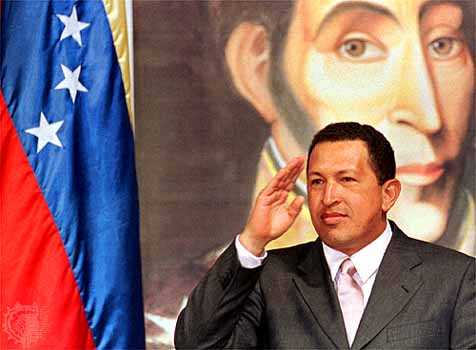 Now anyone in such a bright public spotlight is bound to suffer criticism, but it’s almost silly to listen to some of it. What is immediately obvious in almost all examples, is that it’s the wealthy sweating through their socks that someone might have found a fairer and more democratic method than the open-market rampage of capitalism.

The one thing that does seem to be a hit on him is that he keeps adjusting laws to allow for him to stay in power longer, and to give that power more reach. And before America’s “Right” chimes in with calling Chavez the next Hitler, only two things really need to be mentioned: Patriot Act. Al Gore.

Chavez is also largely criticized for the friends he keeps, such as ailing Cuban leader Fidel Castro. When is the US going to get over the whole Cuba issue? Really? How long does a country deserve to be crippled on the world stage simply because you can. Bully. I mean, are we still pointing fingers and saying “Commie!”? What century is this?

Pilger’s film goes further than just showing how Chavez is effecting change in South and Central America. He also illustrates well just how far the US government’s fingers have fiddled into keeping their “backyard” unstable, impoverished and ready to bow down and bow out as the need arises.

It’s a fantastic watch and I encourage you all to download it run out and see it as soon as possible. If nothing else, it shows how far people are willing to go to protect their exploitive ways, and how far the exploited are willing to go to assure it doesn’t continue.