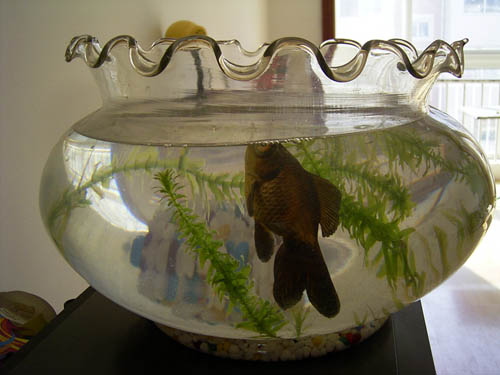 May a flight of angels carry you…

Yup. After a week long hunger strike, in protest of being bowled no doubt, Fish #2 has also passed on. Now, true, the little guys didn’t come with any instructions or anything, but I’m fairly certain I know how to take care of a fish, or two. I’m blaming it on being in China, I’m not sure with what justification, but well.

As he is now on the fast-track to the sea, the cause of death may never be fully understood. I had noticed that he wasn’t eating his beautifully coloured blue/red food balls (as provided by the pet man in the square), but I took a page out of Parenting 101 and figured when he was hungry enough he’d get over the fact that it wasn’t up to his gastronomical appreciations. I was wrong. Either that or the water was no good. Listen, this isn’t CSI.

After returning this morning at 3 a.m. from a night out with the Future School crew I saw he was grasping the last few threds of his cute, if somewhat feeble, existance. I quickly, and impressively considering how much beer I had consumed, performed an emergency aquatic environment transfer and an H2O-rejuvination process. Sadly it was all for naught, and sometime between 8 and 10 this morning he made his final swim across the Styx.

And he didn’t even have a name.

Well, I’m out of the caring for fish business and into the novel writing business now. I was recently passed an interesting Web site by my friend Sarah that has lit a challenge in me – I’m going to write a novel. I know, I know… many, MANY utter this phrase, but how many try to do it in 30 days or less (well, at least 42,000 people last November)?

The concept is simple, write 50,000 words in the month of November and you win. The Prize? Nada. Well I supose a great and satisfying sense of accomplishment, the ability to brag – until death – that you’ve written a novel, a working manuscript you can polish and actually try to get published, etc. etc. But yeah.. mostly that first thing. The whole thing is more about just taking the pressure off of writing a masterpiece and putting it all down to the single and unifying marker of word count. Quantity, not quality.

So… I’ve no idea what I’m going to write about yet, but with about a week until I start, I should be able to come up with something. Expect updates on my progress.