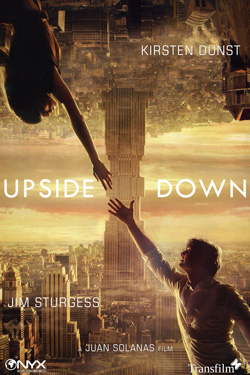 Watched Upside Down last night. I can’t go so far as to say it’s a terrible movie, but it’s a nearly terrible movie. I’m disappointed, as it has so much that I thought I would like. Sturgess, Dunst, and the always enjoyable (but terribly under-utilized) Timothy Spall; sadly none could save this film. It’s shot in a sexy highly-saturated movie poster/Christopher Nolan style, which is cool. It’s a relatively unknown Argentinian writer/director and was shot completely outside of Hollywood. And it has the potential for some hardcore sci-fi.

Alas, that final bit is where it stumbles so terribly, that it leaves the rest of the story so hopelessly impotent. In fact, the “science” part of the fiction is so far removed from any resemblance of actual science that even the Wikipedia page can’t bring itself to call it sci-fi, and instead calls it a “fantasy-romance”.

For those that haven’t seen it (which is probably most everyone but Russians, and people with Chinese bootlegs or torrent downloads — as it’s not out in the Western world until 2013), the concept is that there are two planets that exist side-by-side, only a kilometre or so separates them. They can exist like this because of something called “Dual Gravity” (unique in the universe to only this/these planets).

On the “top” planet is a city of wealthy clean and organized citizens, “down” below are the societal dregs, long oppressed and exploited (for natural resources that the “upper” planet doesn’t have on the vast amount of planet that is never discussed in the film). Unfortunately, Dual Gravity stops the two planets from smashing into each other and ending this galactic clusterfuck.

Even if we suspend the obvious ‘WTF?’ of the thing, and the heavy-handed classism diatribe, we’re stuck with a terrible Titanic-inspired love story (there’s even a “let go” moment, but without the payoff), some ridiculous cross-gravitational bee vomit, and a whole lot of questions, like:

– How the hell do these guys get on top of cold winter-blown mountains so easily?
– What’s happening on the other side of the planet(s)? — surely an advanced TV-watching/basketball playing civilization couldn’t have just developed in the plot-inspired spot between the two worlds.
– If a person spans the distance between the two planets and splashes into the ocean, why aren’t they smashed to bits. Or is water’s ability to compress also something dual gravity magically solves? Maybe people have stronger bones?
– If items brought from one gravitational field to another gravitational field begin to heat and burn, why don’t people too?

Perhaps I just got unlucky and the bootleg was heavily edited for our Russian friends, perhaps the wider-release forthcoming will contain an extra 30 minutes of cut scenes that nicely explain the huge gaps in logic that piss all over even the most modestly intelligent viewer’s sense of reason. Probably not though.