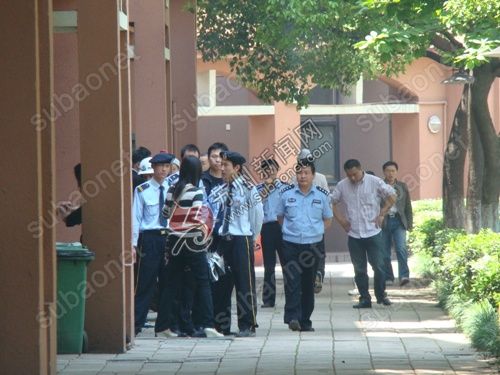 Polce and security guards talk to a journalist near the crime scene at Singha Plaza.

Murders in the news are as common as the weather report, and are rarely read with any greater attention. It is not often that they touch your life in some way, even if just remotely.

Unfortunately, such is not the case with Suzhou’s most recent homicide, as it happened only a couple hundred metres from where I sleep, and to someone I’ve (if only peripherally) very likely met.

This past Wednesday morning the bloodied and naked body of a girl in her early 20s was found in her Singha Plaza (XÄ«n DÅ«Â GuÇŽngChÇŽng) apartment. Despite sharing the apartment with 7-8 other girls, none of them had heard a thing. The body was found when her roommate (as in shared her room) returned home in the morning.

While the news reports only indicated that she was a cashier at a “Western” restaurant (of which Singha Plaza is a long string of), I had heard from another friend that she worked at La Rose — a decent restaurant Maggie and I frequent regularly.

It wasn’t until yesterday (Saturday) that the killer was caught a few blocks away in the Four Seasons (SÃ¬ JÃ¬ JiÄyuÃ¡n) apartment complex. Aparently the police had known since Wednesday that he was hiding out somewhere in the mass of upper-income apartments, and were sitting on the exits. Yesterday, after the owner of a vacant apartment on the 21st floor attempted to enter it and found it locked from the inside, the drama began to unfold.

The apartment owner called the police, who had been waiting for just such notice. With the police now surrounding the building, the guy threatened to jump and save the courts the trouble. After three hours of negotiations, and a giant safety pad being put in the jump zone, the suspect surrendered – butcher knife in hand.

Though I’ve not yet read what the relationship was between the victim and the suspect, reports indicated he used to be head of the security guards for my apartment complex, but left more than a year ago and was most recently working for a restaurant in the same strip of restaurants that the victim worked at (it wasn’t revealed if it was the same restaurant or not).

Now, before this post goes into Googleland and starts creeping up on searches from people looking for info about Suzhou, let me say that Suzhou, and China at large, is one of the safer places a foreigner can live in – and a marked improvement over many of our own countries. Though theft is rife, violent crimes are no higher here than any place else, and arguably lower than many. Being mugged is uncommon, and being anything “at gun point” is almost unheard of.

My point in blogging about this is not to showcase the seedier side of the city, but to simply comment on the creepiness of having something so horrible happen so close to home. All I can really say is how badly I feel for that girl, her family and her friends; and how glad I am that the suspect was caught and is not lurking around my neighbourhood anymore.

[UPDATE 7pm May 10/09] Just a quick update, caught the Suzhou news on this. Looks like the motive, perhaps unsurprisingly, was unrequited love. The guy had written love letters all over the walls inside her apartment building. She apparently had turned him down and suffering humiliation and a loss of face he killed her. What a fucking tragedy. Truly.