Continuing our foray into Suzhou’s tourist spots, we headed to æž«æ¡¥ (Maple Bridge – man do I miss syrup) recently and were pleasantly surprised. Generally speaking, I’m not impressed by Chinese tourist spots, yet lately I’ve not been let down – perhaps I’m just tuning out the stuff about them that previously ruined the experience for me (big stones with red-painted characters for photos, the matching hat mafia, fibreglass everything, etc.).

The park is located to the west of the old city, on the bank of the Grand Canal. To get there, simply take any bus that goes to the ä½•å±±æ¡¥) stop. Once at the stop there will be a bunch of little two-seater ä¸‰è½®è½¦ (motorized trikes) that will take you to the gates for one or two RMB. Still a week away from my first payday in nearly three months, the 25 RMB entrance fee was quite welcome. The ticket will get you into the park, but you’ll have to pay another 20 RMB to visit the adjoining Hanshan Temple (which we decided to wait on). 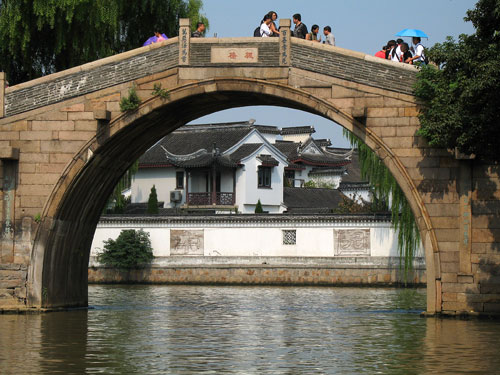 The area was made famous by a visit from Tang Dynasty poet ZhÄng JÃ¬. Well technically it wasn’t made famous by his visit until years after his death. Like many great artists, he had to take the trip towards the light before he was appreciated.

But anyway, he’s well-remembered here, with most visitors to the park stopping for a photo seated on his lap and touching his magic finger (thought to bring fortune to the tugger).

Check this out to have æž«æ¡¥å¤œæ³Š read to you in a little Flash show. Otherwise, here is the poem, along with an English translation (by Ko Koh, patched up by me – sorry if there are errors):

Night Mooring at Maple Bridge
by Zhang Ji
Teeming the sky with frost,
the moon sets amidst the crow’s mutters

Wakefully, the punts’ lights sway,
their grief amongst the maples by the river

At the boundary of Gusu,
stands the temple of Hanshan

All the way toward the visiting punt,
the midnight carillons gutter 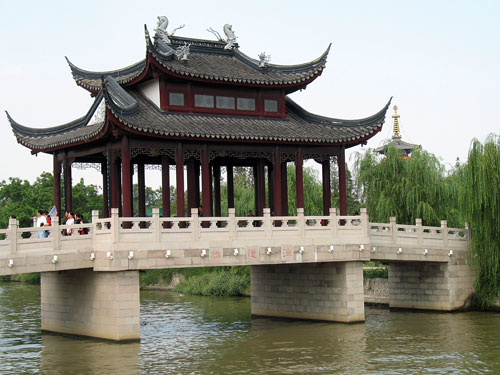 Most of the park is set on an island that is crossed over first in the south by the massive, and in turn ironically named, æ¸”éšæ¡¥ (Hidden Fishermen’s Bridge), and then again by the park’s namesake to the north. Pathways wind throughout the area, allowing visitors to stroll along the banks of the Grand Canal and give a wave to the multitude of boats lugging coal and flying flags of drying laundry.

Along with a collection of garden-like retreats scattered throughout, there are also several restored areas to give one the sense of what the area would have looked like centuries ago when the poet himself paid a visit. Small fishermen huts are open to visitors and display clothes, nets and modest furniture. Though it has a pretty heavy re-made feel, there has been at least some effort to make it authentic looking.

Adding to the historic character of the park is a small lane of shops selling your typical collection of “antiqued” goods and cultural revolution souvenirs. Dotted between them though are a few recreated shops from days gone by; including a rice & grains shop, and a pawn shop (bank).

We couldn’t have chosen a better day to go, with un-characteristic clear skies and a nice breeze to blow off the rather hot September weather, it was unsurprising that several soon-to-be-weds were posing for wedding photos around the park. In my shorts and t-shirt, the heat didn’t provide too much discomfort, but I can’t imagine running around swapping Qing clothes for modern ones under the blazing sun – all the while having some photographer saying “hold it, hold the pose.. damn, I forgot to load the film.”

Wandering back towards the southern entrance we stopped quickly to try our skills at archery. For 10 RMB we were given 12 arrows, of which Maggie insisted she only use up two. I launched my 10, showing off a bit to the fiancee and the attendant who was insistent on showing me how it’s done, evidently unaware that she was trying to school a master (of the suction-cup, packaged with headgear and matching cowboy six-shooters, variety). 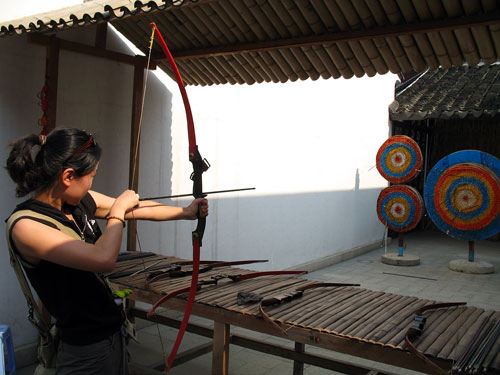 Maggie, who having stated more than once in recent months that she wants to take up archery, took about five minutes to get the arrow nocked. With nearly no juice left in my camera, waiting for her to figure out how to fire the damned thing seemed like an eternity. Finally, with the assistance of the attendant, and no less than three onlookers, she hit the mark. HuÄ MÃ¹lÃ¡n, look out.

All in, the tour of Maple Bridge took about two and a half hours and being only a couple kilometers from my apartment, I’m sure we’ll visit again – at least to check out the Hanshan Temple.