The bittersweet defeat of my unsuccessful attempt to hitch out of Ipswich has been tempered by the fact that I am again staying with some wonderful strangers.

Woodbridge was great, a nice break from the fast pace of London. I mostly just sat around, read and watched TV. One day I headed into Ipswich and checked out the museum and a place called Christchuch Mansion â€“ essentially a really large estate that has a lot of old portraits and paintings. It was pretty cool. The Ipswich museum was pretty standard in regards to the natural history stuff. However, it excelled at giving me a brief history of England. It was also very cool to learn about how the area was affected by World War II. Because it was on the east coast of England, and a semi-important port to the ocean, it was pretty heavily bombed by the Germans. 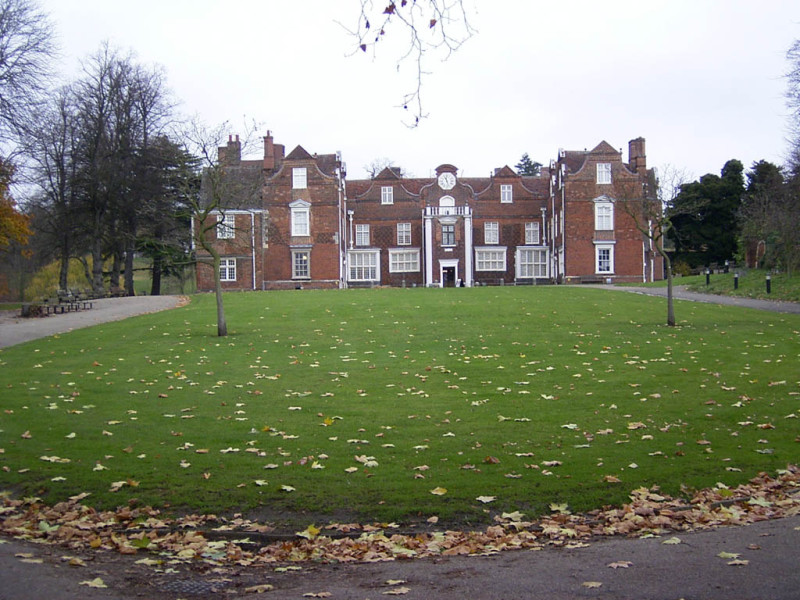 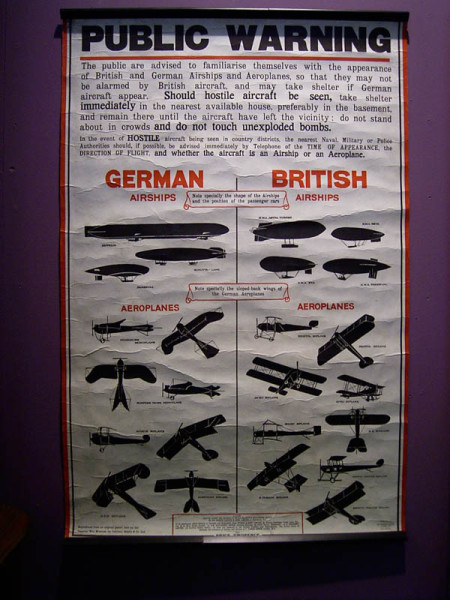 A poster in the Ipswich Museum from WWII on how to identify friend and foe in the air. (Cory, I figured youâ€™d like this). 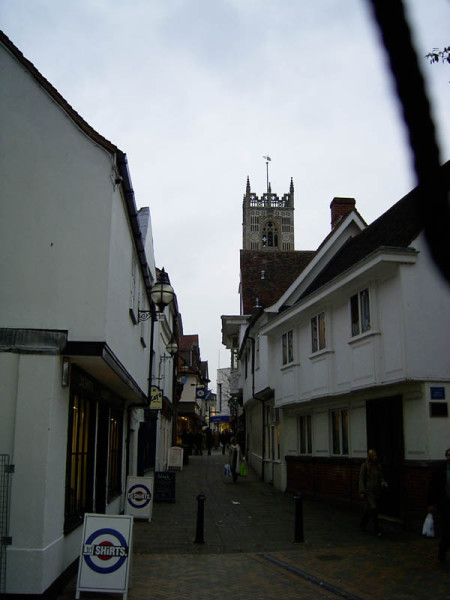 Ipswich â€¦ hmmâ€¦ yeah, this photo about sums it up.

I left Woodbridge early Friday morning and confronted the pissing sheet of rain with vigor — for about an hour and a half. I tried a couple different spots near the round-about heading onto the A14, the road that headed roughly in the direction of Manchester. I was armed with a good sized piece of cardboard with big black “TOWARDS MANCHESTER” printed on it. It was last seen on the side of the road, virtually mush from the rain, with a desperate “NORTH or WEST” on the back.

Admitting I was not going anywhere, and fast, I found a local bus and headed into Ipswich city centre. Finding the bus station (a.k.a. a church converted into a tourism agency), I stood in the queue for about 20-30 minutes, struggling with my backpack, and finally got to the front of the line. I was informed that the bus to Manchester, via Cambridge, had left at 9 a.m. (it was now about 11:30 a.m.). My only other option was to get the 3:10 p.m. bus to London and then a bus in London to Manchester, arriving at like quarter to midnight. The cost for the bus was about 34 quid, so I decided to take my new found information to the train station and see what they had to offer. A 10-15 minute hike later and I found out I had just missed the train. Godamnit! I was beginning to feel like I was in some sick British-version of a Steven King novel and was never going to be able to leave Ipswich. The next train was at 2:20 p.m., but would get me into Manchester at 6:30 p.m., which was exactly the time I was supposed to meet Dani. The train was â‚¤47, but weighing the extra 10 quid against arriving uber late and having to climb back up the hill to the bus station, I decided to pop a squat and wait for the rails to take me north.

The train ride, even with changes in Peterborough and a missed transfer in Doncaster, was pretty good. Definitely better than the 8 hours the coach would have taken â€“ and god knows how long hitching would have taken. Luckily the weight of failure counteracted the lightening of my pockets… and balance was restored.

After being pointed in the right direction by a cute girl with a trumpet, Dani met me at Piccadilly Gardens and we grabbed a bus for Chorlton, the borough of Manchester that her flat was in. â€œFlatâ€ isnâ€™t really the right word, it is more a multi-level house with stairs I still havenâ€™t seen the top of. Some of Daniâ€™s flatmates are out of town (one in Blackpool and one in Prague), however the ones that remain are great! Claire is an Aussie in marketing, and works for a company that helps implement proper programs and facilities for people with disabilities. Willow is studying her Masters in Animal Behavior and is from New Zealand and John works with his dad in photography, and is quite funny.

We spent Friday night drinking some Bass beer I bought at the local Safeway, bustinâ€™ out various riddles and watching hilarious British television â€“ of which I cannot remember a single title. My memory of the night may be somewhat hazy due to the fact that Willow brought out a bottle of Absinthe. I have never been a big fan of straight liquor, and am usually tentative of shots of anything strong, but never, never have I watched three people swig back a shotglass full of liquid and then proceed to uncontrollably twitch for five minutes. You know that little irk you get when you take a shot of whisky or Jagermiester — like that, but continual. It was brutal.

Saturday Dani had to work, so I hung out with Claire all day. She is really cool — Iâ€™m really starting to have a very good opinion of Aussies — not that it was bad before. We went into city centre, walked around a Christmas Market, drank some mulled wine (basically warm spiced red wine), and just generally stared at Mancunian architecture. 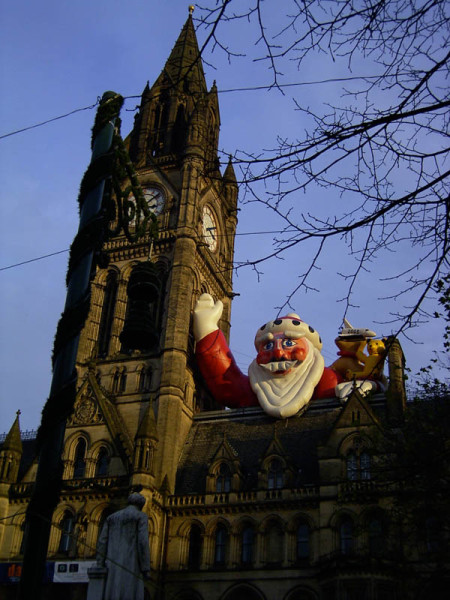 Manchesterâ€™s town hall â€“ if it looks remarkably like the parliament buildings in London, itâ€™s not a coincidence. Same architect and designed to look the same â€¦ ah, the British, known for their originality the world over 😉 . I also like the giant inflated Santa, really brings out that â€˜classicâ€™ look. 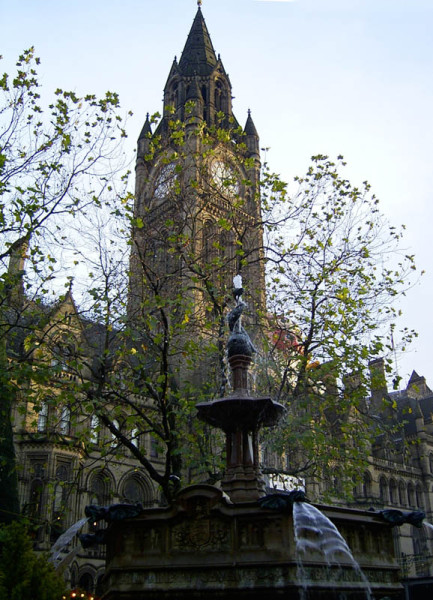 Same buildings, better angle. This is where Claire and I had some mulled wine and browsed the little outdoor Christmas market â€“ Mmmmm, cheese samples.

Last night (Saturday) was another night of drinking, this time (the safer) red wine and Pepsi with Malibu rum. I also brought out the Crown Royal and reminded Dani what sheâ€™s missing living over here. We stayed up until about 4 a.m. trying to solve riddles from the riddle book Sue and Gino got me for my birthday. We also played a killer game of Asshole â€“ but seeing as Willow changed all the rules and kept calling the Asshole a Bastard, I think weâ€™re changing the name to Bastard. Really, I wouldnâ€™t mess with Willow. Sheâ€™s like 6â€™1â€ and a kickboxer… I made her demonstrate her kick on the punching bag in her room … deadly mate. Ironically, she denies that her parents were hippies, even with a name like Willow, and the fact that sheâ€™s been a vegetarian since birth (puts my eight years to shame). 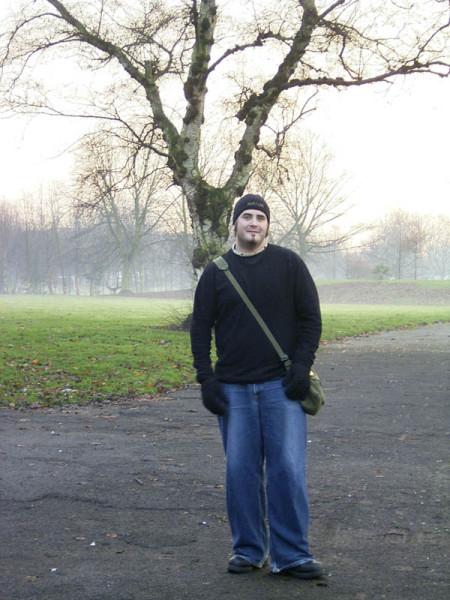 Me in a park in Chorlton by Daniâ€™s. 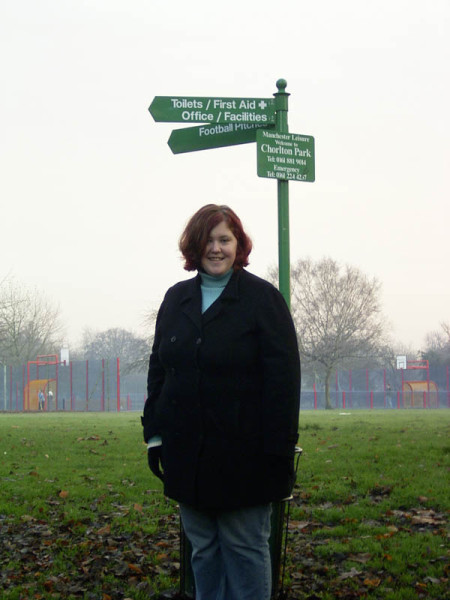 ani in the same park, just slightly to the left. Can you tell Iâ€™m spending LOADS of time on these captions? 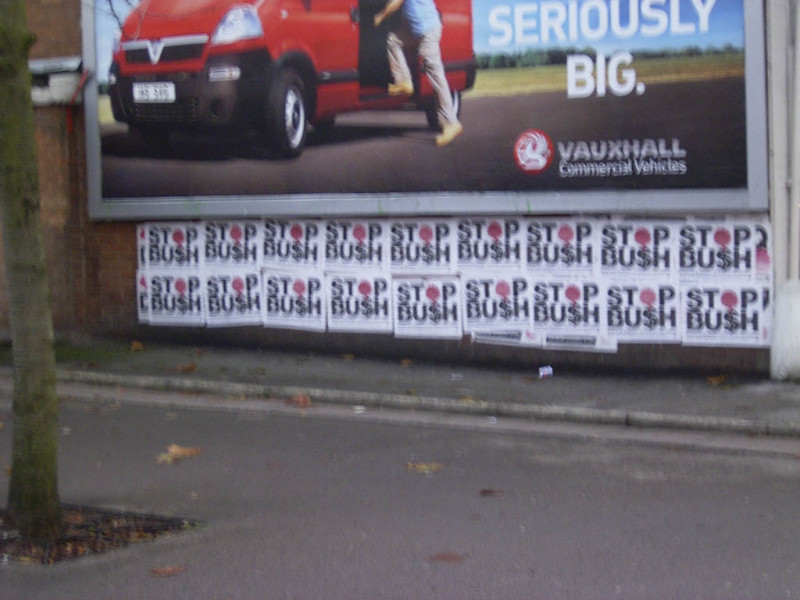 This one is for Gino. Iâ€™m sure youâ€™ve all heard, but Bush came to visit London last week. There were TONS of protests and these signs are all over the place. 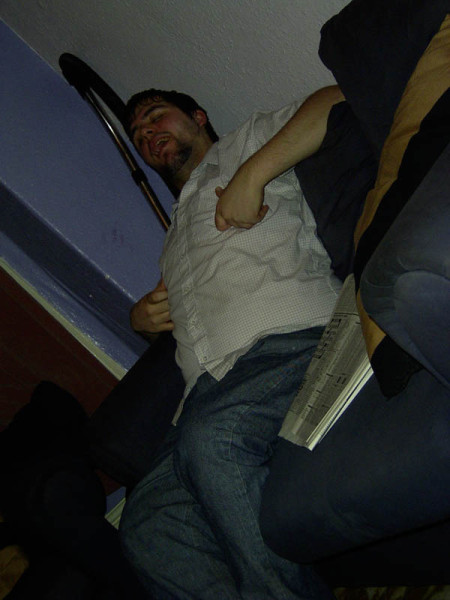 Oh! Also, I got my first solid taste of Rugby. For everyone in North America, where Iâ€™m betting it barely made the news, England beat Australia in the World Cup of Rugby yesterday morning. Essentially, over here, this was the equivalent of the Super Bowl. It was also the first time in a LOT of years that the Cup came back to the Northern Hemisphere.

Well, after checking my e-mail yesterday and having an e-mail from a guy that runs a hitchhiking site, Iâ€™ve renewed my resolve to once again try my hand at hitching. Basically his e-mail pointed me to a very current message thread on a board that was talking about hitching in the UK. The messages basically said that hitching from rural south-eastern England (read: Suffolk or Ipswich) is useless. It also said that the further north you get, the easier it becomes â€“ the people are friendlier. Plus, hitching from major cities is a lot easier. So, Iâ€™ll give it another go, and see what happens, as Iâ€™d REALLY like to skip on parting with more money.

And one final note â€“ I got in contact with the editor of the travel section of Canoe.ca, and heâ€™s agreed to publish some article ideas I have for Scotland. With that I contacted Hilton Hotels and I may be staying in a nice room when I get to Edinburgh. I havenâ€™t heard back about comp. transportation yet â€“ which is really what I need. 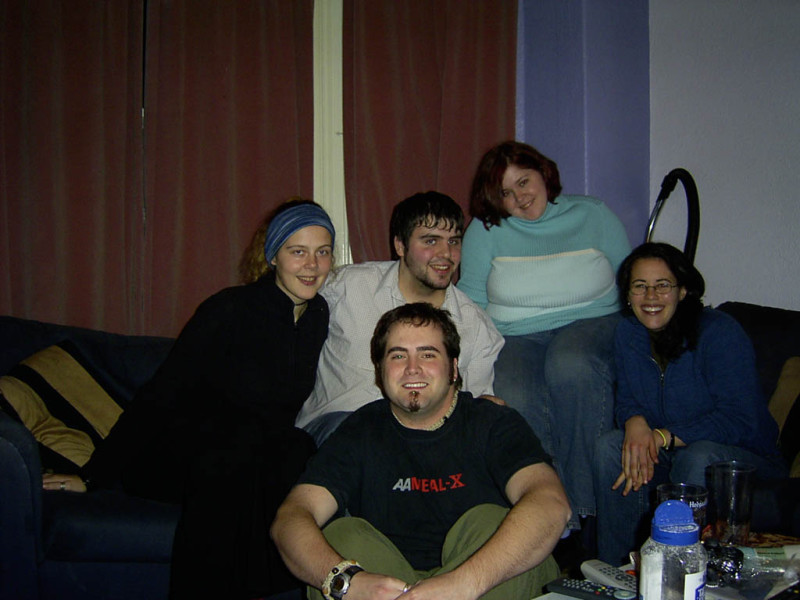 The Manchester Crew (minus Pete): Willow, John, Me, Dani and Claire.