Well, once again Iâ€™m writing this on my laptop with hopes of posting it the following day. I was shown a cool backpackerâ€™s Internet cafÃ© today that only charges a â‚¤1 per hour of usage. I figure Iâ€™ll post this before I head back down to Andy and Margaretâ€™s place and pick up the winter jacket I left there when I departed yesterday. Damnit. I mean, I havenâ€™t found need for it yet, and actually ended up carrying it around uselessly my first day in the Queenâ€™s city â€“ but, I am somewhat certain as I approach Inverness and winter and the open roads â€¦ Iâ€™m going to be grateful for its coziness.

So, where to beginâ€¦ the eternal question. Well, I left off on Wednesday, after having spent the day in London. True to my previous speculations, I headed back into the city on Thursday to meet up with Maryann as she finished work on Oxford Rd. So, hopping on the Northern Line I headed up to Embankment, skipped over to the District Line, or was it Circle… regardless, I ended up at Oxford Circus. As I was on the escalator out of the station a guy around my age approached me and said, â€œSo, what part of Ontario are you from?â€ I was like, â€œWha?… howâ€™d did you… *scratches head*â€

He explained that he saw the Green Party pin on my bag and figured I must be Canadian (wrongfully assuming there was no Green Party elsewhere). He then saw the Ontario pin I have on my bag, and decided to find out more. We chatted outside the station for about 10 minutes, just chatting about travel and stuff. He explained that he was from Sudbury, and had been over here travelling since August, oh and that his name was Rob Morden (of all things). I had about 15 minutes to kill before I could call Maryann and let her know I was in the city and waiting for her, so we decided to stroll around the area and see what it was like … it was like, crowded. It was rush hour and there were a gazillion people all going in the opposite direction we were going it. We slipped back on to a smaller side street and checked out pubs and such. Eventually we met up with Maryann, but not before chatting up a cute Spanish girl from Madrid who was working in one of the souvenir shops.

Rob, Maryann and I hopped on the subway and headed to Liverpool St. Station to go to Brick Lane, an area of London that is sort of little India — a bunch of Indian food places. We went in for a pint of Amstel and some Sublime at a bar called 33 Feet East (of what, we weren’t sure). We were met there by Maryann’s flatmates Peta and Shevonne, as well as Shevonne’s boyfriend Martin. We headed directly for food. After about 10 touts on the street trying to convince us that their restaurant was the best deal, we ended up going to the only one that didn’t try to convince us to come in — incidentally one of the busiest on the street. We had a great meal and some great conversation. As I knew I would, I instantly got along well with Maryann. The three girls were all Aussies, while Martin is a Londoner. 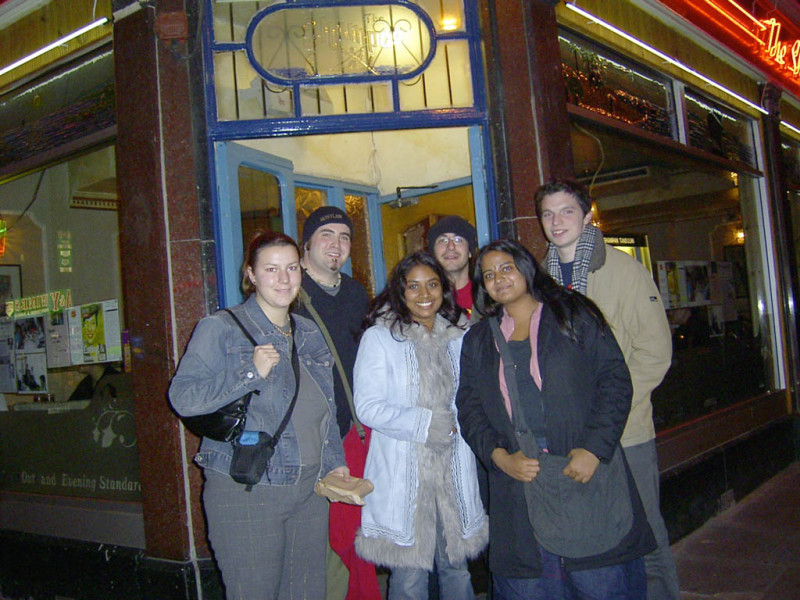 We quickly went to another little pub, but it was closing. Apparently, the pubs all close at 11 in London, but the clubs/bars all stay open late. Departing, Maryann, Rob and I split from the group to hop on the Underground and head to our respective places. Maryann explained that if I wanted to, I could come stay at her place in the city as her one roommate was heading to Egypt.

Friday I did virtually nothing, but polished off a good number of Labatt Ice with Andy and watched some British soaps (so that’s what Coronation Street is!). With a bit of a hangover I woke up Saturday morning and headed back into London, this time with all my gear â€“ minus my winter jacket… damnit! Maryann met me at the Gloucester St. station, unfortunately I got off at the South Kensington station â€“ and had to hike it a few blocks. We grabbed some groceries and got to her place just in time for the arrival of Sarah from California.

Sarahâ€™s funny, as she’s been abroad long enough that the combination of Californian-rearing and British-exposure has caused her to feel very Canadian to me. I think Iâ€™ll give her honorary Canadian status. I actually just finished giving her a crash course in Laptopology. She got a laptop for graduating university, but sadly had not really taken it out of the box before she got here, so really didn’t know much about how to use it. It was a painful experience for me because she has a phenomenal laptop, CD-writer, DVD-ROM, loads of memory and hard drive space, top notch connections, bla bla blaâ€¦ AND itâ€™s a Gateway ta boot. Ah well, it was fun giving her my uber-tired, I’ve-had-four-hours-sleep, computer lesson. But I’ve got a couple glasses of Pepsi in me, so I should make it throu… ZZZzzzzzz… right, if I had fallen asleep, do you really think Iâ€™d have had time to type ZZZzzzzzzâ€¦â€¦ (for all the Monty P fans out there). Besides, Iâ€™m a sucker for a cute girl in need. 😉

Anyway, where was I? Right, Saturday morning. Maryann and I hung out, met Sarah, and then headed to Westminster on the tube, to catch a ferry to Greenwich. I was initially a little hesitant to spend the extra â‚¤4.30 on a ferry pass, but decided it might be a nice opportunity to dust off the camcorder, which unfortunately meant I didn’t take loads of pictures â€“ but you can all see the film when I get back. Westminster is visually very cool. It is where all the houses of parliament are â€“ Big Ben, these pretty gold buildings, etc. Very cool stuff. The ferry was awesome, and well worth the few quid it cost to take it. It was about an hour long, and did get a bit chilly, but the tour guide was pretty funny, in that VERY-British way, and I got to see London from the Thames, which I think everyone should do. 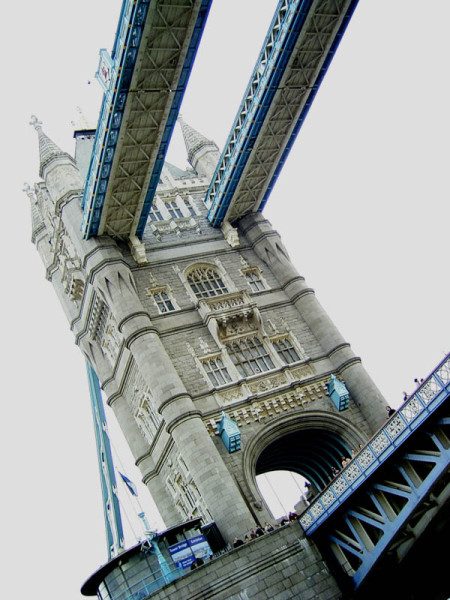 I snapped this as the ferry was going under the bridge. I managed to get more daytime photos of Tower Bridge, which was cool â€“ but didnâ€™t have the space to post them here. 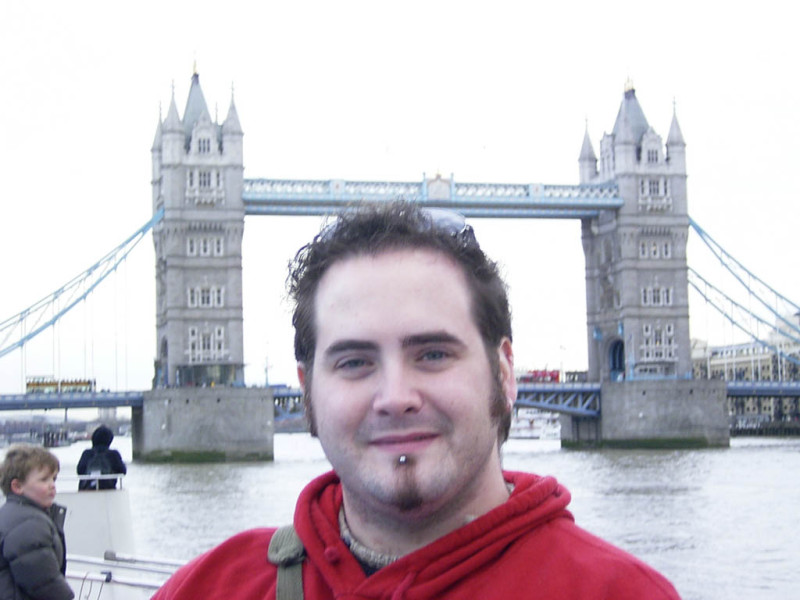 Thatâ€™s right folks act now on our Holiday In London Package and you too can get your very own Tower Bridge Hat! Just Call 1-800-GOOFY-PHOTO. Maryann was insistent that the photo be taken with my head PERFECTLY centred between the bridge.

Getting down to Greenwich, we basically went straight to the observatory, which is on top of this big hill in the middle of Greenwich park. Greenwich for those that don’t know is where the Prime Meridian is. It’s where all latitude is measured from. It is also ground zero for time zones. Time is all plus or minus so many hours from Greenwich Mean Time. At the observatory at the top of the hill they have all this cool stuff, including a big green laser that beams out marking the Prime Meridian. By the time we left there it was dark so we skipped on the Maritime Museum, which was a bit of a bummer, but it just gives me a reason to come back I guess. We did manage to find time to stop for pies at the famous Goddardâ€™s Pie House, much to Maryannâ€™s suggestion â€“- it should be said though, the pie was great! 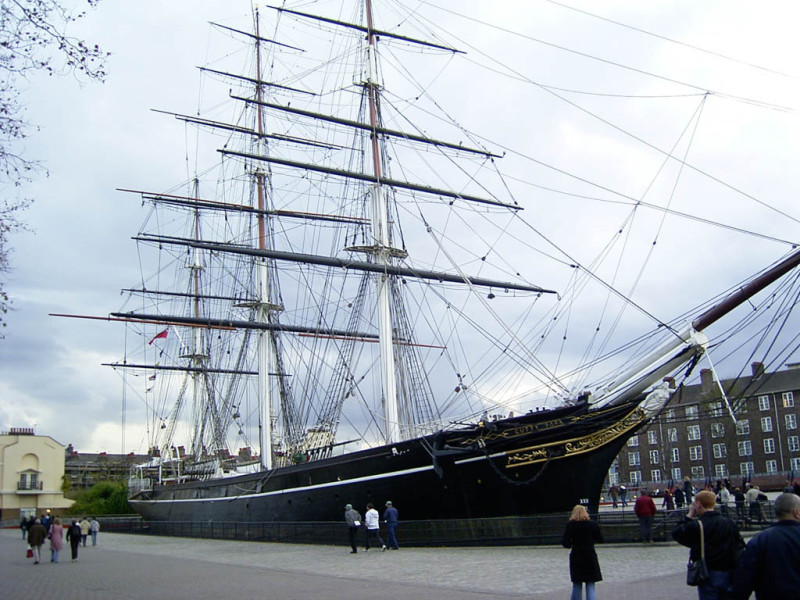 The Cutty Sark â€“ a really cool ship. It was/is clocked as being the fastest ship to journey from Australia to England or something. Itâ€™s right when you get off the ferry in Greenwich. 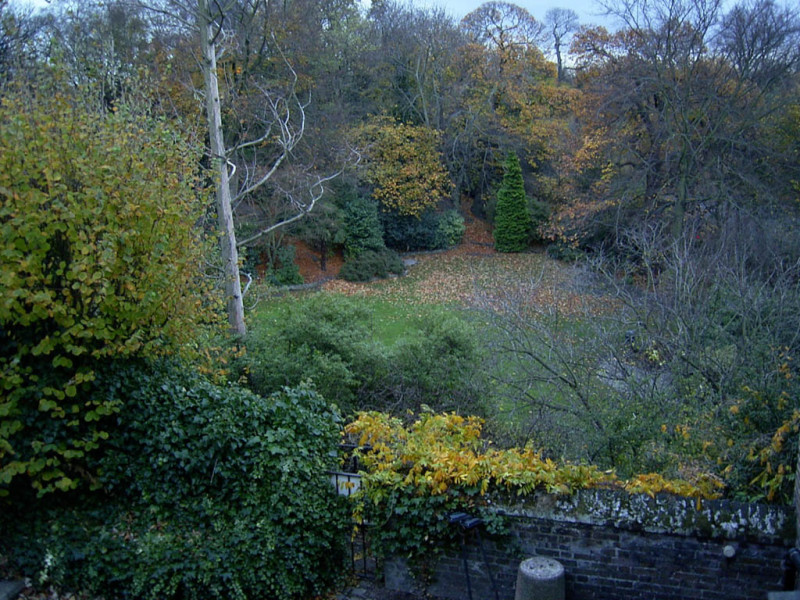 The gardens around the observatory of Greenwich. They reminded Maryann of The Lion, the Witch and the Wardrobe â€“ I agree. 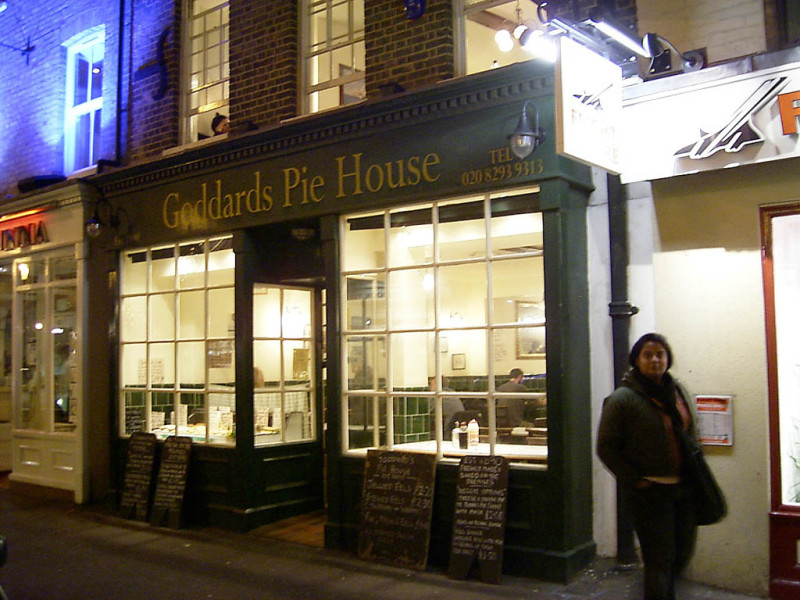 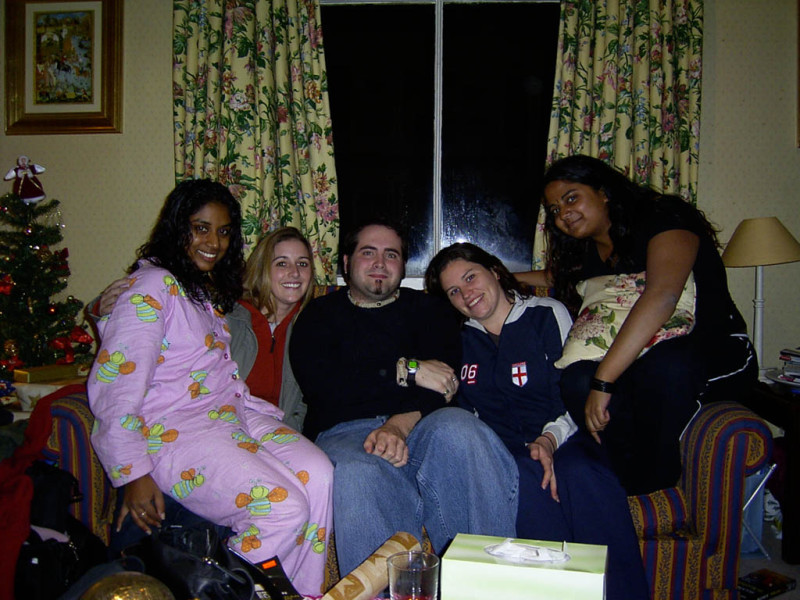 Alright, I look pretty goofy in this photo, but Iâ€™m surrounded by WOMEN! From Left to Right: Shev, Sarah, Me, Lauren and Maryann.

We got back and I got to meet Maryannâ€™s third flatmate, Lauren. Shev cooked us a fabulous lasagna for dinner, and we had inklings of ideas to go out and see some DJ uptown, but we all just basically sat around the kitchen table and chatted — and drank … ok I think it was just me that drank, but I did get them all to dent my Crown Royal bottle with me. Lauren went to bed first, at about midnight, then we lost Shev at about 4 a.m., but Sarah, Maryann and I were still all up and talking politics at 6 a.m. â€“ that was about the point I looked at Sarah and seeing the tiredness in her, I suddenly realized I was wiped, much how I feel now.

So, I went to bed at about 6, and then woke up when Lauren was getting ready for work at about 10 a.m. this morning — whoo hoo, four whole hours. Luckily my day only really consisted of lounging around, walking to the Internet cafÃ©, again getting a wonderfully home cooked meal from Shev, and chatting. Time flies though, and I have no idea how it got to be 1:15 a.m. â€“ I need to get to sleep. 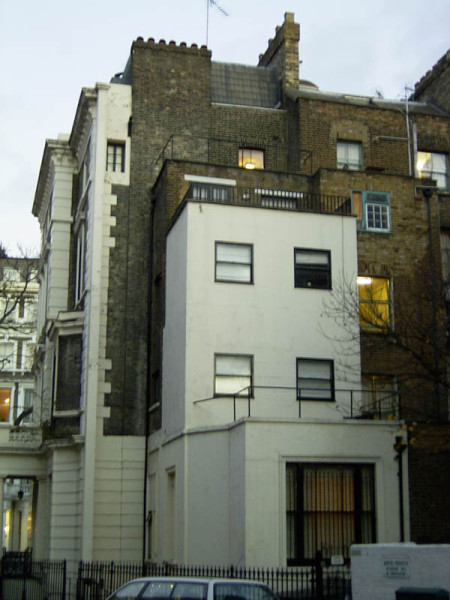 This is the apartment from the outside/street level. The balcony of where I was staying is on top of the white, block-like thing with four windows. 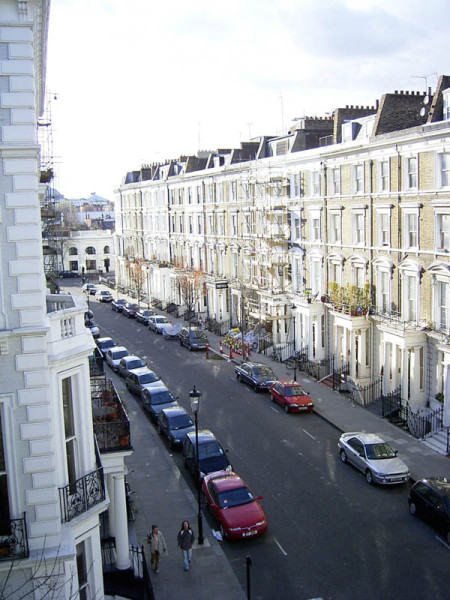 Looking down the street from where I was staying downtown London. 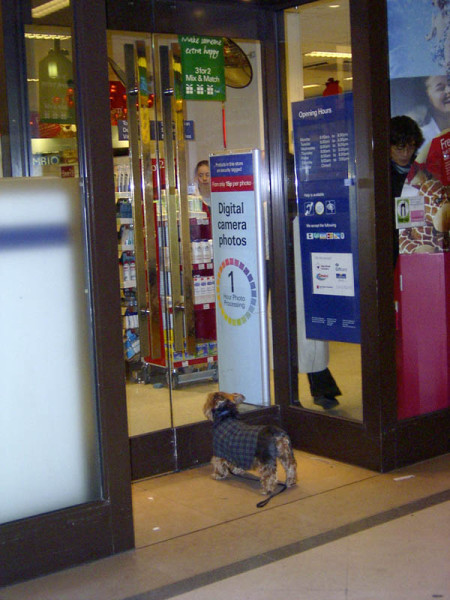 Anyone thatâ€™s watched Snatch with me knows that I cannot help but laugh EVERYTIME the little dog in it squeeksâ€¦ same deal here. Every time I see this photo I chuckle. It was the funniest thing â€“ this was in a little shopping centre/mall type thing and this dog was standing outside the glass door of a drug store just waiting for the right person to come out, watching everything that went on inside. People would come outâ€¦ heâ€™d move, and then run right back and put his nose up to the door. Too funny. Too cute.

Tomorrow should be an interesting exercise in time management. Iâ€™m tubing it back down to Morden to grab my jacket, coming back up here, hopefully being able to catch the Tate Modern museum (museum of modern art) with Sarah and then catching a bus at 4:30 at Liverpool St. Stn. for Woodbridge to go and stay with my friend Ruth’s mom and sister. I talked to them tonight and they were kind enough to work out all the details for me, so that is a load off, but it is going to be hard to get everything done tomorrow and say goodbye to London before 4 p.m. I do hope Sarah will be able to join me at the museum, as doing the science and natural history museums alone was kind of boring, but she is trying to catch a bus to Darby tomorrow, and doesn’t know if sheâ€™ll have time. And somewhere in all of that, the two of us are going to try and find time to get down to the Internet cafe so she can e-mail her mom and I can post this entry.

Alright … night. Morning, or whatever the fuck it is.