After failing, once again, to secure a ride with my thumb, I returned to the house in Manchester, begging and pleading for another night’s accommodation.

It was cool to stay another night, as I got to know Pete a bit better, as he only showed up on Monday night. I informed him that when he got to S. Korea he needed to try Sojue (or however you spell it). I also advised him to give the peanut butter covered squid balls a try.

I also got a chance to watch Delicatessen, a film by the same writer/director as Amile. It was great. Post-Holocaust, a building in France relies on the “meat” supply of The Butcher. When their latest victim (or tenant) moves in, the butcher’s daughter falls for him, and enlists the help of the Vegetarian Underground to help save him. It was great!

Tuesday I boarded the bus bound for Inverness, ironically the EXACT same bus I saw pass me just as I surrendered hitching the day before. The ride was quite nice. Where the south of England just reminded me of a fusion of Ontario and Manitoba, the north is quite scenic. We stopped for a quick break in the Lake District, a beautiful section of England that I’d like to visit in more depth in the summer months. 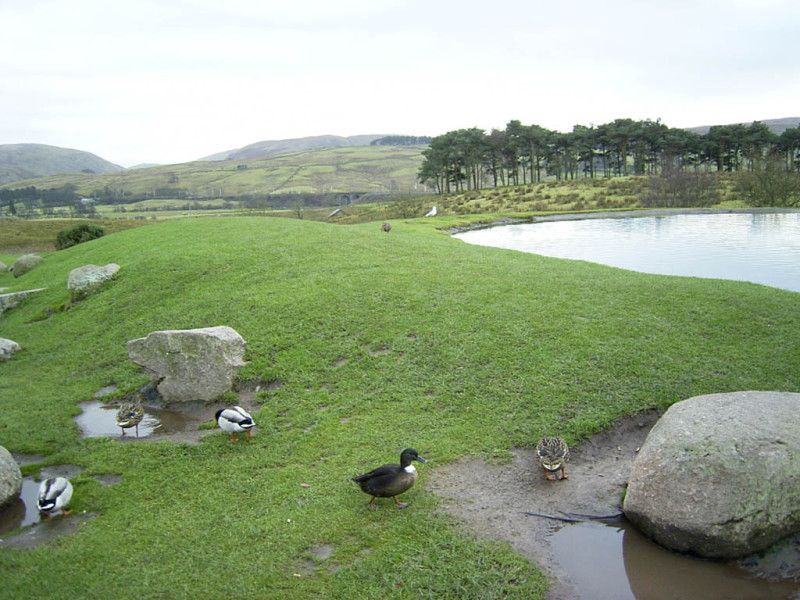 The view from the rest stop in the Lake District, just south of the Scottish boarder.

I got into Glasgow at about 6 p.m. Barbara met me at the station and we got acquainted while we walked a few blocks to the city bus stop. She had to go to a yoga class, so I went to the local supermarket and grabbed us a bit of grub to eat, along with the cheapest wine I’ve ever bought (a whole two quid). We spent the night just sharing travel stories and such.

Wednesday morning I headed into the city centre, aimlessly wandered a bit until I came across the tourist information centre. I grabbed some fliers and got some info from the nice Russian lady working there (odd that). I headed up to Saint Mungo’s Cathedral – it was kind of neat, but the coolest part was the view of the Necropolis. I didn’t actually get across to it, as it was starting to rain (a VERY common phenomenon here!), but it was pretty cool to look at none the less. 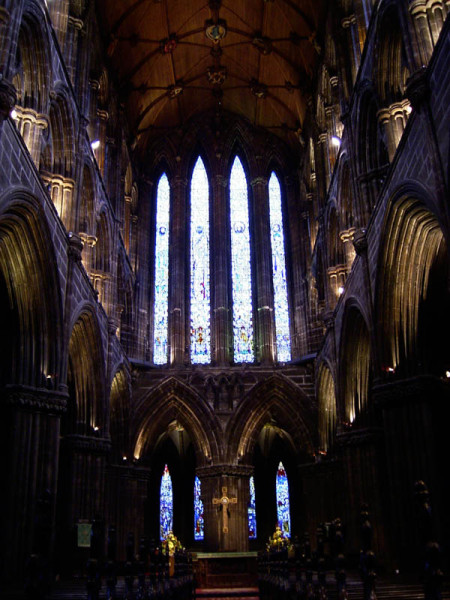 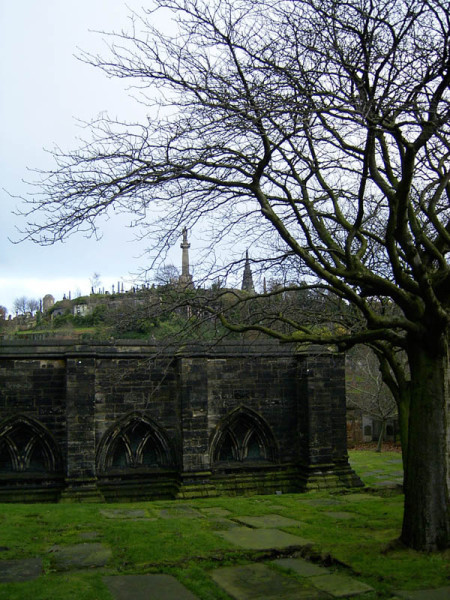 After getting back down to the city centre, I found shelter in St. Enoch Shopping Centre. I have to admit, I was starting to get a bit down about things. I was feeling the pressure of having to find an angle for the article I’m writing for Canoe.ca, the rain was a bit depressing and I dunno, I was just starting to feel worn from the constant travelling. It wasn’t something I had really considered, but never staying in a place longer than a couple days, having to pack up everything and move on is quite exhausting. The night brought with it a bit of relief from the stresses, and Barbara did good to cheer me up. We rented the movie Human Nature, written by none other than Charlie Kaufman (Adaptation, Being John Malcovich), and it was a laugh.

Thursday morning brought with it a number of things that lifted my spirits. First, I got an e-mail from the New York PR firm that represents EuroRail, and they’ve offered me a sweet railpass for while I’m travelling in mainland Europe. I wrote them a few days ago explaining that I’m a writer for Canoe.ca and will be travelling Western Europe during January. So yeah, they gave me a pass that is good for a month for 15 days worth of travel in 17 European countries (oh, and I’m near certain it is 1st Class – yup, nothing but the best for this boy!). Holy crap eh!? So, this sort of changes my Europe plans a bit. I’m now considering visiting Greece and Italy. Also, a quick conversation with Carol (my distant cousin I’m staying with in Belfast) yesterday made mention that she might be going to Prague for New Year’s. I am not sure if I could afford it, but that would be awesome! North American’s don’t really hear much about Prague I guess, as I knew virtually nothing other than it is the capital of the Czech Republic. So, turns out that (A) It is this amazingly beautiful historic town that is an awesome party spot for youthful Europeans, (B) it is Eastern European, i.e. cheap – at least for the next year or two, and (C) it’s the place where they shot XXX with Vin Diesel.

With my spirits brightening, I ran into the city in hopes of enjoying Glasgow while the sun was shining. I managed to get about an hour or two in before the rain came. Not too bad! My first priority was to go see Glasgow Green, a park that hosts the People’s Palace/Winter Gardens (it looked really cool from the picture I saw), and also to see the Former Templeton Carpet Factory.

Somewhere in this process it started to drizzle, and it was full-on raining by the time I had bussed it back down to Argyle St. to hunt out Glasgow’s Gallery of Modern Art. The place was pretty cool, though surprisingly small. The whole thing took me inside an hour, but I passed on the library in the basement – you just KNOW that there were a thousand things down there. I don’t know if you’ve ever been to a gallery of “modern” art before, but if you ever get the chance, it is well worth it — especially in the UK, where every museum is free. There is a whole lot of stuff in it that is completely goofy by my standards. Yes, this is the place where you find vomit on canvass and stuff like that (this gallery was vomit free, I think). But there are some amazing, thought provoking pieces as well – the type of stuff that isn’t just some stupid hyped crap that is “tres chic” in NYC right now… but stuff that 200 years from now will be considered the definition of our times. 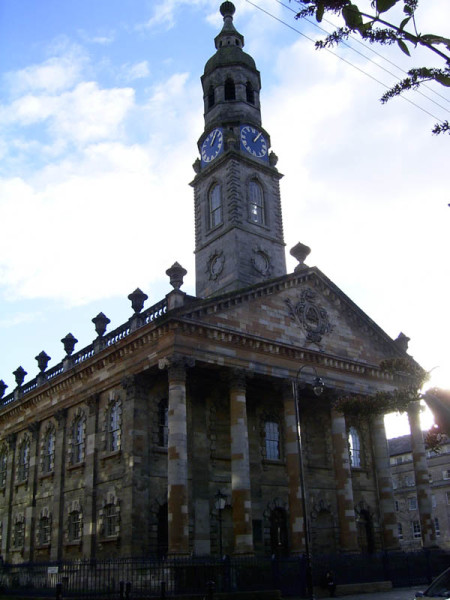 St. Andrewâ€™s in the Square â€“ I donâ€™t really know what this building is, or rather was, as it is now a restaurant/night club or something. 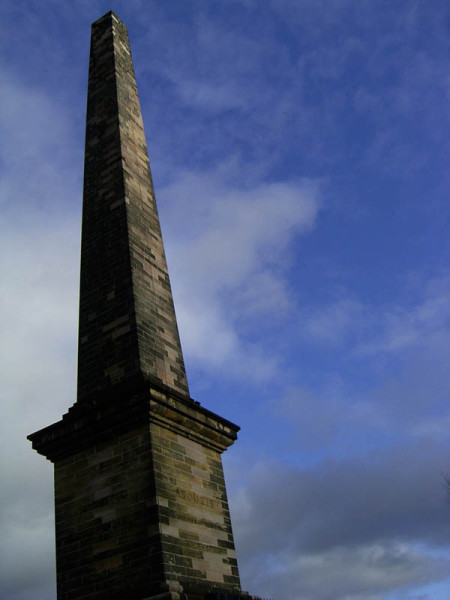 A big obelisk monument in Glasgow Green, a nice park that runs along side the River Clyde. 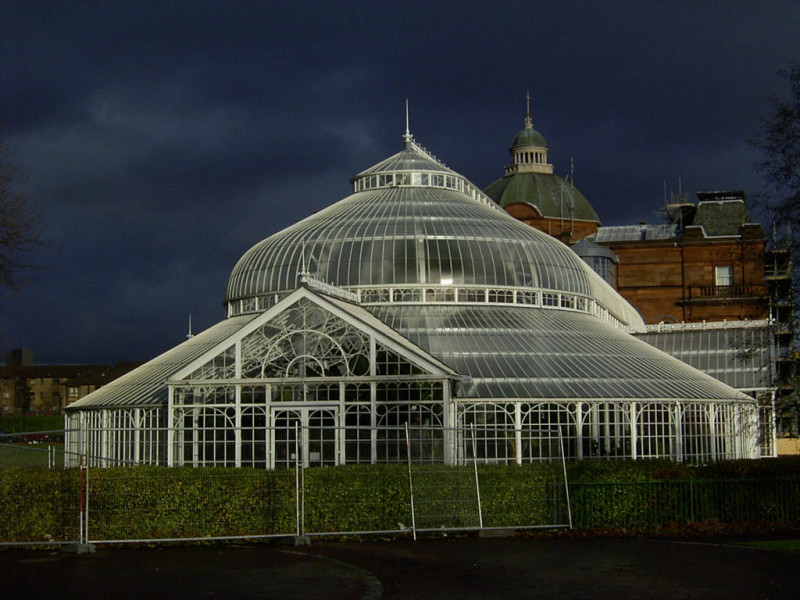 The Peopleâ€™s Palace and Winter Gardens (the white greenhousey thing). I should have gone in, but I felt rushed by the disappearing sun to get some more photos shot. 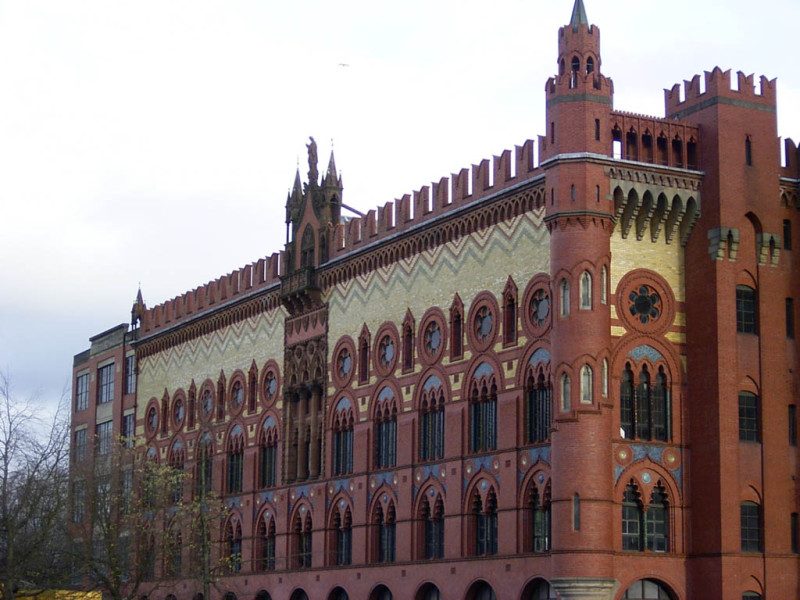 The former Templeton Carpet Factory â€“ allegedly the oldest building in Glasgow â€“ I was, admittedly, disappointed. Itâ€™s just a big business centre now. This photo is actually just the back of it. I couldnâ€™t find a â€œfrontâ€.

The double-edged sword about Glasgow is that it is going through a conversion from a city of industry to a city of culture – so near everything in the city is being worked upon. Great for the city, crappy for photographs. After the Modern Art Gallery, I headed back to the apartment to get out of the rain and to eat something. I was also quite excited to find out if my inbox contained a letter from (A) ScotRail – with whom I’ve been trying to get free transportation around Scotland, and (B) Scottish Tours – with whom I’ve been trying to get a free day-trip bus tour out to Braveheart Country and Loch Lanoch (or something like that). I was not disappointed; both had written me back with positive things to tell me. Unfortunately the schedules didn’t jive with the Scottish Tour thing, as I’m planning to be in Inverness tomorrow night, and their Saturday daytime tour was all booked. But, as I write this, I am still drying off from my quick excursion into Glasgow to grab my first class rail tickets from Glasgow to Inverness tomorrow, Inverness to Edinburgh on Tuesday and Edinburgh to the ferry port on the west coast on Thursday (where I’ll catch a ferry to Ireland). Not only that, but Eddie, my contact at ScotRail, through in a day-trip train from Inverness to Kyle Of Lochalsh, where I can visit the Island of Skye. I guess that the train journey is one of the most beautiful routes in Europe. Sweet!

At about 6 p.m. or so, I gave Barbara’s mobile a ring and we agreed to meet downtown to get some good Scottish pints in us. Earlier in the day I had revisited the Tourist Information Centre and asked what bars were good. They gave me an entertainment guide and a pamphlet for the Scotia Bar — a bar that claimed to be the oldest in Glasgow. I presented Barbara with the info, and even though she said most bars that didn’t have windows you could see in were a bit dodgy, she agreed to give it a shot. It was a great little place. We got a seat RIGHT beside the band (I mean, so close that if there was a backstage, we were in it…). The band did a bunch of cover songs, ironically many North American ones – but the singer’s Elvis impression was first rate. We stayed for a few pints (with Barbara switching to Vodka and Coke) and then went to check out a place called the Biere Republic – modelled after the bars in Prague (oddly enough). It was a younger pre-clubbin’ crowd, but still much fun! I opted for a taste of home, and got a bottle of Moosehead. We grabbed some cheesy chips (a.k.a. cheese fries) for the bus ride home, and came back to the flat to watch a bit of my new favourite show, The Office, before bed. 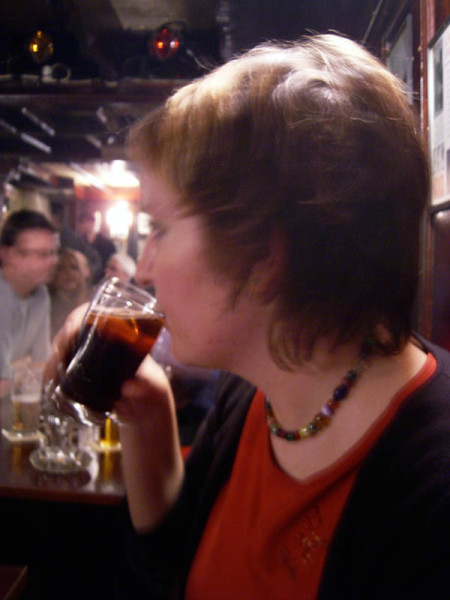 Barbara, doing what the Irish do best. 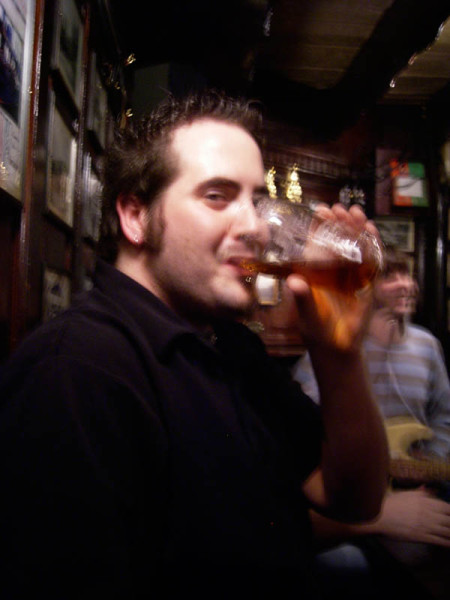 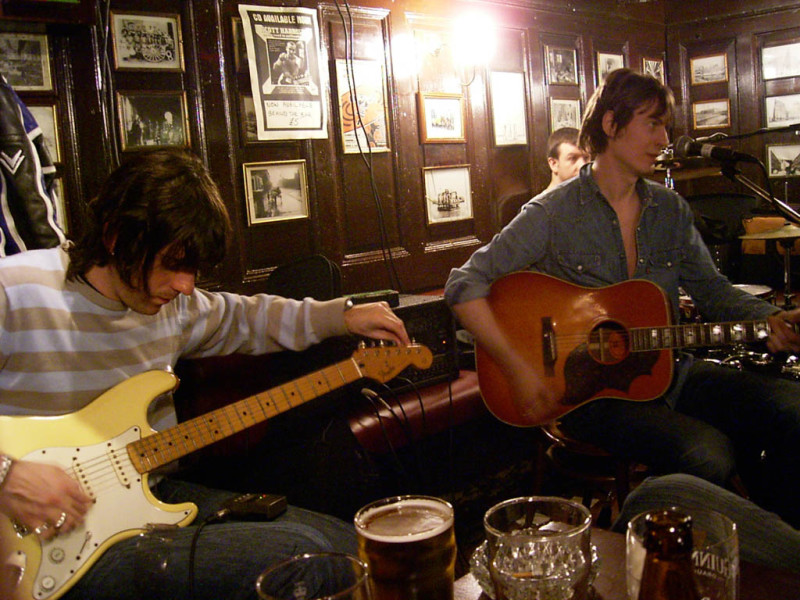 The Vagabonds â€“ the Worldâ€™s Best Trio (according to the bill). 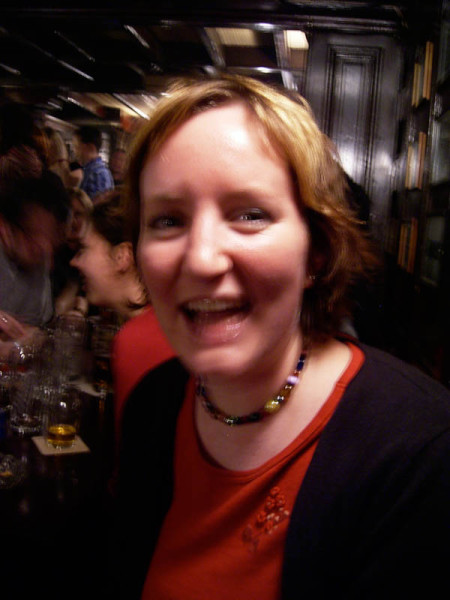 Barbara, finally standing still enough for me to get a photo. 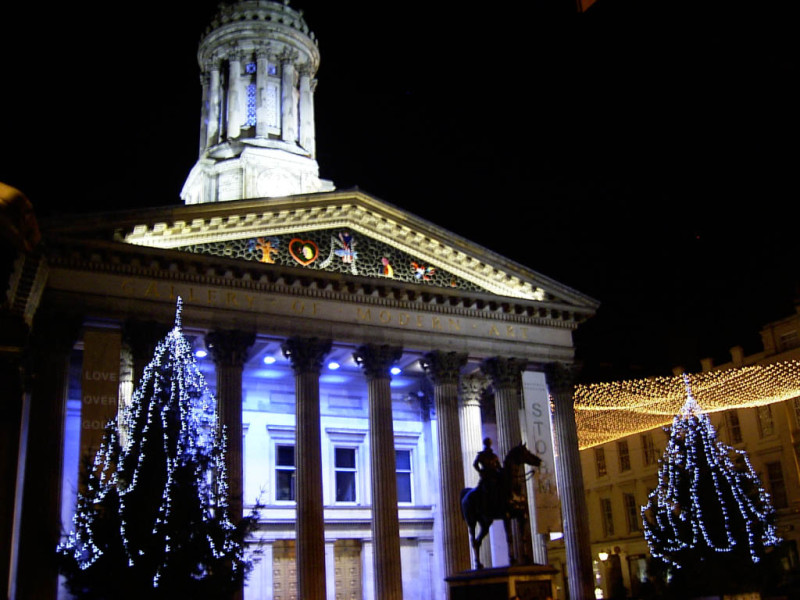 The Gallery of Modern Art at night. The small roadways (which are actually blocked off to cars) on both sides of the building have a net of lights that creates a virtual ceiling â€“ itâ€™s very cool. 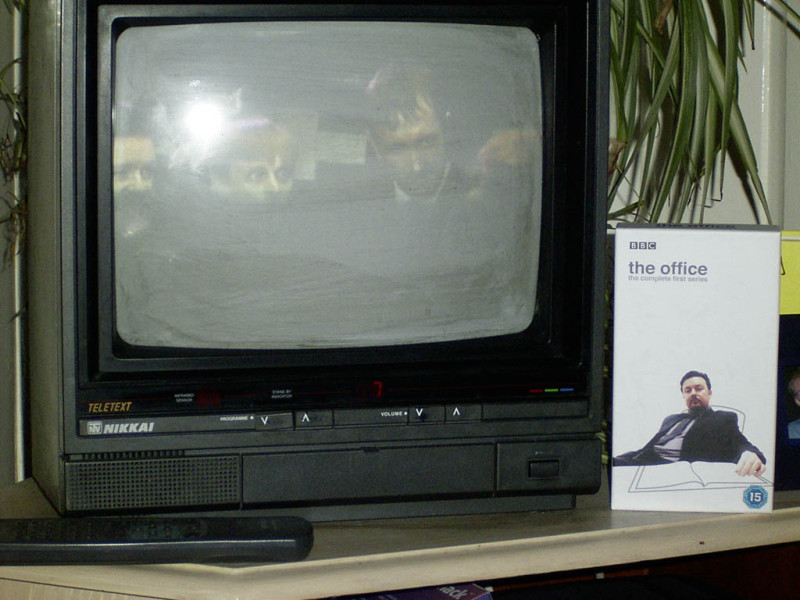 The Office â€“ I watched the entire first season today. It is hilarious. Itâ€™s filmed like a reality TV show, but isnâ€™t. Itâ€™s FULL of awkward moments, which always make me feel uncomfortable, but it is hilarious.

With my Scottish trip planning all resolved, I’m just waiting for Barbara to get home. Her boyfriend, who lives about two hours away, is coming down for the weekend and the three of us are going to hit the town. Not sure when I’ll next update — I know that Simon, my host in Inverness, doesn’t have Internet, as may be the case with Tori, the Aussie putting me up in Edinburgh. So, who knows. I’ll do my best though.