It’s a bit of a test to be writing this on my laptop, so as to save time on the Internet.

After braving the I90 and the outskirts of Buffalo; Vanessa, Dana and I arrived at the Buffalo-Niagara International Airport. I sorted myself out at the ticket counter, said my goodbyes and headed towards security where I, surprisingly, didn’t set off the alarm. I ALWAYS set off the alarm – but I took no chances, I was one step away from taking off my pants to prove that I wasn’t concealing any terrorist devices.

A short wait, and a short hop and I was at US Airways’ hub in Philadelphia. My stay at the Philly airport was a bit longer than in Buffalo, but still bearable. I grabbed the cigs for my still-unmet hosts at the duty free and when boredom set in I went back for a bottle of Canadian warmth (read: Crown Royal) to show that Irish whiskey ain’t got nothing on Canadian rye.

I must say, if ever asked to fly British Airways again, there is no doubt in my mind that I would not hesitate. I’ve been on pretty much every major American (and Canadian) carrier, and none of them compared to BA. I was given free headphones to use (none of this $5 crap like on Northwestern and Delta), I was served a mini (about two glasses worth) bottle of wine with dinner. I also got to watch two movies in a little LCD screen set in the back of a seat in front of me (Pirates of the Caribbean and Tomb Raider II, if anyone cares). We landed at about 6:20 a.m. local time, so, 1:20 a.m. EST. I didn’t have too much trouble finding Andy at the airport, the big â€œRYANâ€ sign helped. A short trip from Heathrow and we were in Morden, my temporary home.

I happened to arrive just as David and Samantha (Maggy and Andyâ€™s young ones) were getting ready for school. I took my leave to get some shut-eye near as soon as I could, and managed to sleep for about 4 hours. Tuesday was mostly spent coping with jetlag and getting to know the place I was staying. I didn’t leave the house once all day. Thankfully the myth about the British only having 4 channels is grossly confused — they have a cable box here that delivers a bunch of channels, including a bunch of movies and US shows. No current-season Survivor though. Sigh.

Today was a completely different matter than the laid back day previous. I woke up pretty early — about 7:30 — and around 9:30-10 myself, Maggy and Andy headed into the city via a tube station about a 10 minute walk away. I grabbed a one day travel card (â‚¤4.50) which let me use the Underground and busses an unlimited amount all day. Our first stop was Trafalgar Square, in the heart of London. It was raining a touch, but cleared up pretty quickly and after about an hour the sun was shining. 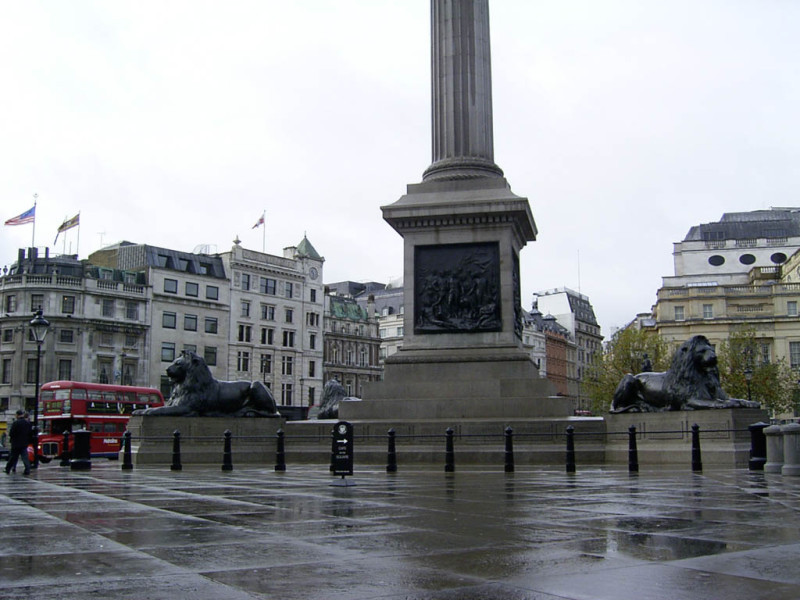 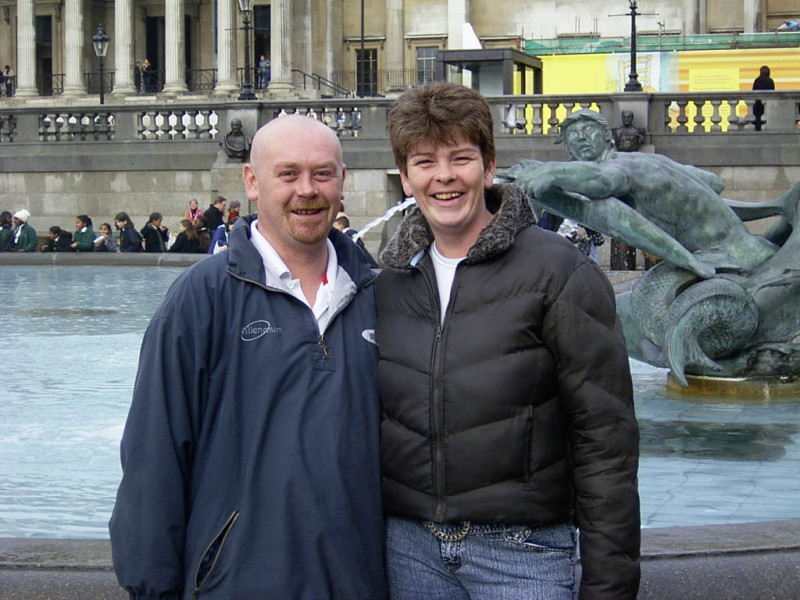 This is Andy and Margaret, my gracious hosts that have been kind enough to put up with me.

We did a bit of a circle that took us through St. Jamesâ€™ Park and managed to get to Buckingham Palace just in time to see the changing of the guard in the distance. I may try and get there earlier for a better position tomorrow. At the Queenâ€™s palace Andy and Maggy headed for home, as they both had to work this afternoon. 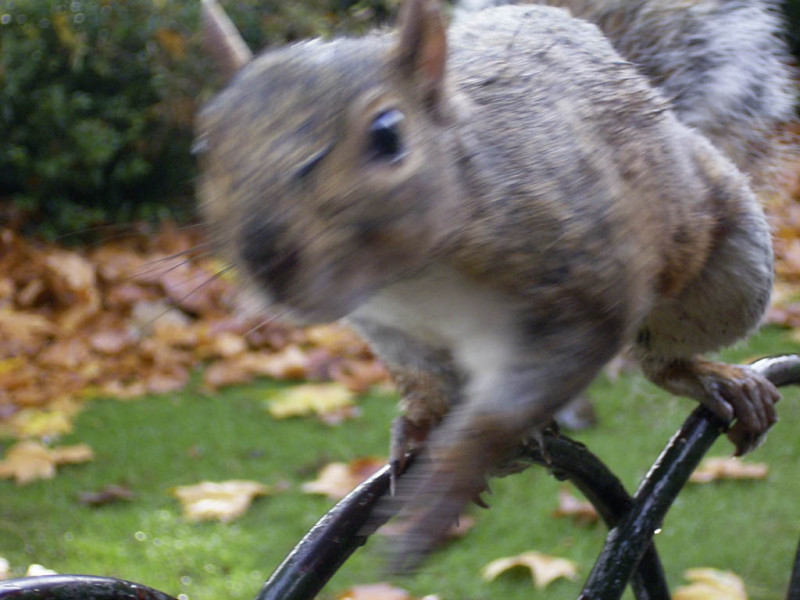 This curious little guy was nearly intimate with my camera. 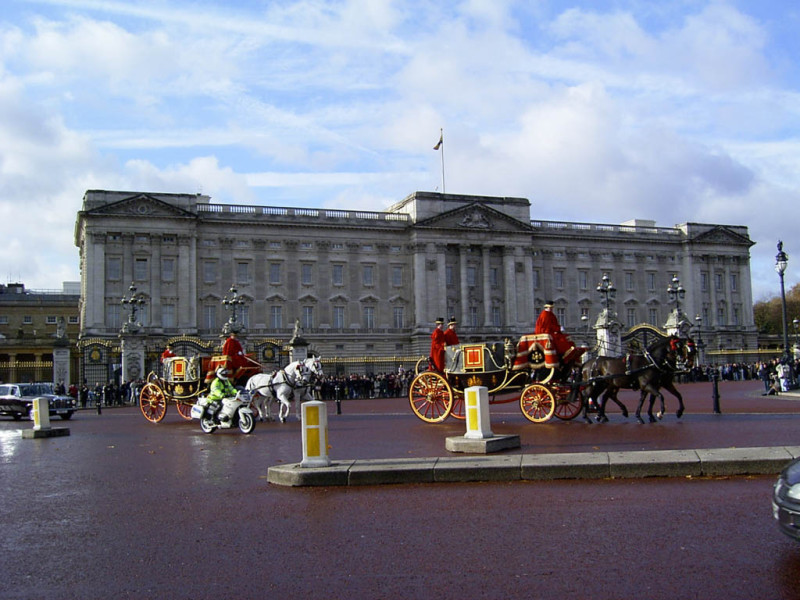 Buckingham Palace: The flag at full mast means the Queen is at home. I tried to knock on the door, but men in fluffy hats advised (with guns) against it.

I was happy to have them along, but I was excited about being left to my own devices and seeing how Iâ€™d fare. I got some quick instructions from Andy on where to catch the bus that heads to the museum area, and about five seconds after they left I got distracted and forget everything he said. I vaguely remembered something about a park, so I ventured into the closest one and hoped for the best. 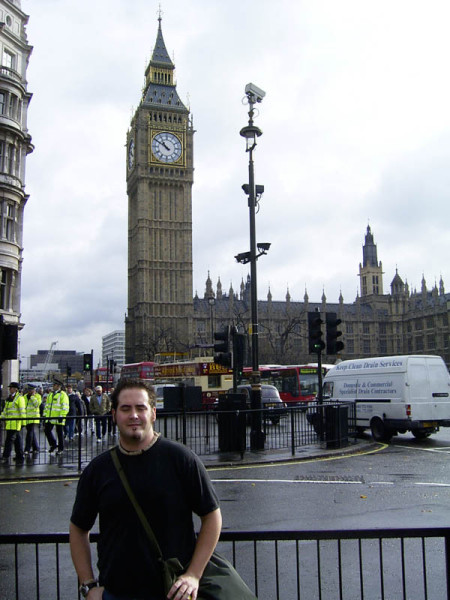 Doesnâ€™t it figure, the one photo of me in it and I blink. 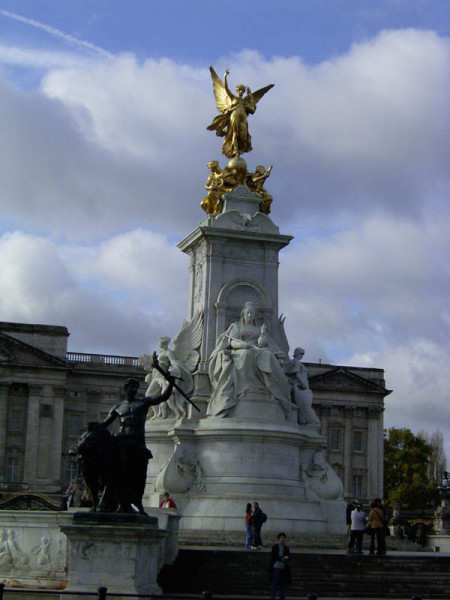 This is the circle outside Buckingham Palace and features a statue of Queen Victoria, Englandâ€™s longest running Monarch â€“ but QE II is closing ranks and is expected to surpass her.

I met a nice old Australian man who was in a rush to meet his wife at Westminster Abbey but had the misfortune of asking me for directions. I pointed in the rough direction of where I thought it was — his poor wife. Then I ran into a couple that asked me to take their picture. The girl, a cute South African, was surprised I was in only a T-shirt, but I explained I was Canadian. The guy was from some country that when said in his accent was unintelligible. He was only in town for the day, so they were in a hurry to see all the major sites. At the other side of the park I figured out my location and realized I was just across from a spiffy monument to a famous duke… that started with a “W”… damn my memory! Ok, new rule – I bring a pad and pen with me. [Oh! Just checked with Andy, and itâ€™s Wellington Gate – named for the Duke of Wellington. Hey, I got the â€œWâ€ right]. Across the street was Hyde Park, so I dipped in there for a bit, but didn’t want to spend any more time walking around parks… and as I had checked my map and decided to walk to the museums instead of busing it, time was wasting. 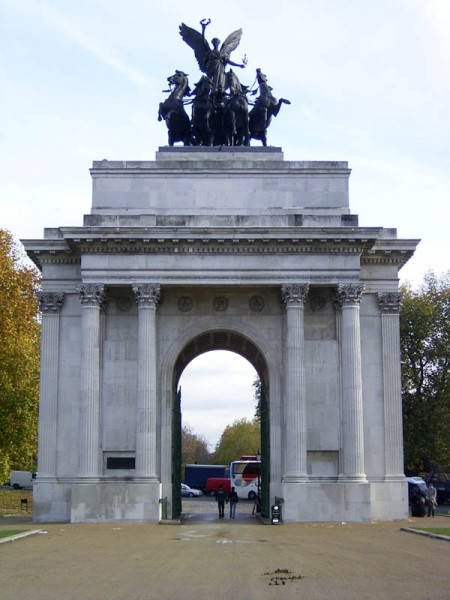 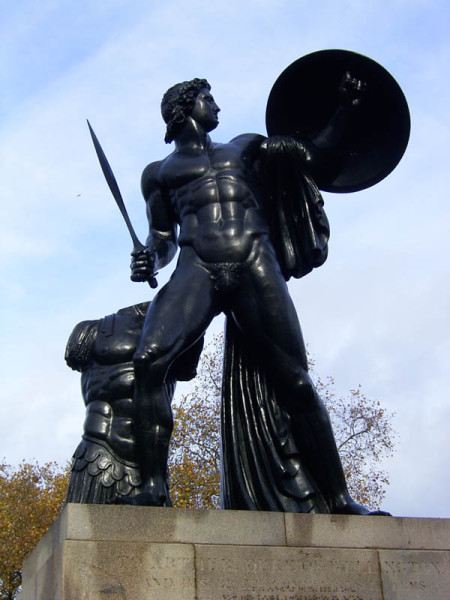 A trip down Knightsbridge Rd., past Harrods (a famous, and tres chic store), and I decided to grab some grub. Not wanting to shell out a few quid and just get some lousy London street meat, I found a small market-shop and grabbed two baguettes (29p ea.) a package of salami (â‚¤1.20), two packets of butter (10p ea.) and a can of pop (59p). I did up one of my baguettes stuffed with meat, and shoved it down out front of the Victoria and Albert Museum (The National Museum of Art and Design). I must have been quite the sight spreading butter with my lock blade (which, thankfully airport security felt it wasn’t a matter of National Security and let me keep it — otherwise I may have been using my finger).

The Art and Design museum was pretty neat, but I got bored of it quite quickly. It was mostly just clothing and stuff – it sort of felt like a combination of education and window shopping — half of which at least I’m not overly fond of.

From there I headed over to the Science Museum. My new found South African friend had told me that there was a Lord of the Rings exhibit there, but she neglected to mention that it was 13 quid to get in … too steep for my money pouch. Mid way though the museum I started to get tired of walking and impatient with not being able to find the “Materials” exhibit, so I decided to leave. Heading for the exit, I found the “Materials” wing — go figure.

I wizzed through it, and went directly to the Museum of Natural History. Outside was an exhibit of photography by a guy who wanted to show the world from the air. It was some AMAZING stuff. I wish I had taken some photos of his photos — but it felt a bit wrong doing that. Heading indoors I did about an hour and a half or so walking around learning about the various animals, bla bla bla… I mean, I canâ€™t complain, as all the museums are free, but the highlight was really the photographs in the square outside. Each one explained the photographs and there was also information all about detailing all the shitty things weâ€™re doing to the world. Upon leaving the museums I headed back to the underground, just in time for rush hour, and began my trek to the Tower of London and Tower Bridge. 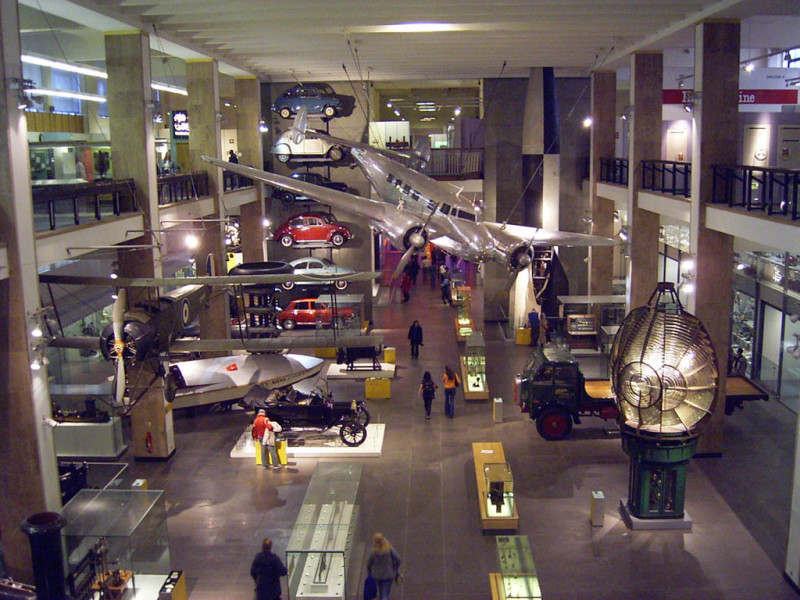 Inside the Science Museum. 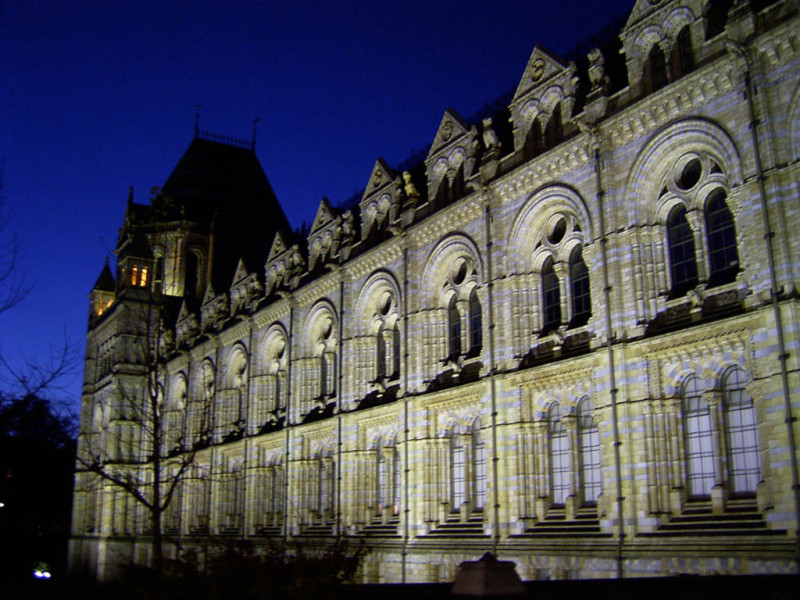 The Museum of Natural History â€“ as you can see, it was dark by the time I left.

Not having actually gone into the Tower of London, I couldnâ€™t really appreciate it, but it should be noted, thereâ€™s no actual tower. The Tower Bridge was beautiful. I crossed it and went down this path called the Queenâ€™s Walkway or something, and got some nice shots from the shores of the Thames. Walking away from the Tower Bridge, I approached London Bridge – which wasn’t all that impressive — it looks just like a regular bridge. To all those in Welland… if Tower Bridge is the East Main St. Bridge, then London Bridge is Division St. — functional, if not pretty. The old one was probably better (London Bridge is falling down, falling down — no joke, it was falling apart, and they replaced it, twice – but give them a break, it was originally constructed in 1200 AD). 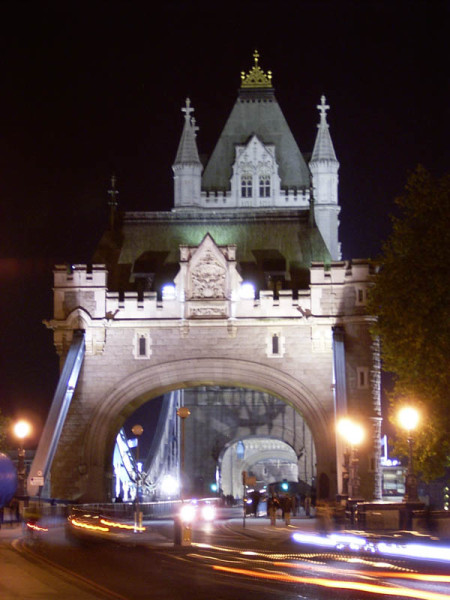 The north side of Tower Bridge. I figured out how to set the shutter speed of my camera (sort of), so I was able to get the neat light smearing effect. Though I didnâ€™t have my tripod, so some of the photos got a slight blur to them. 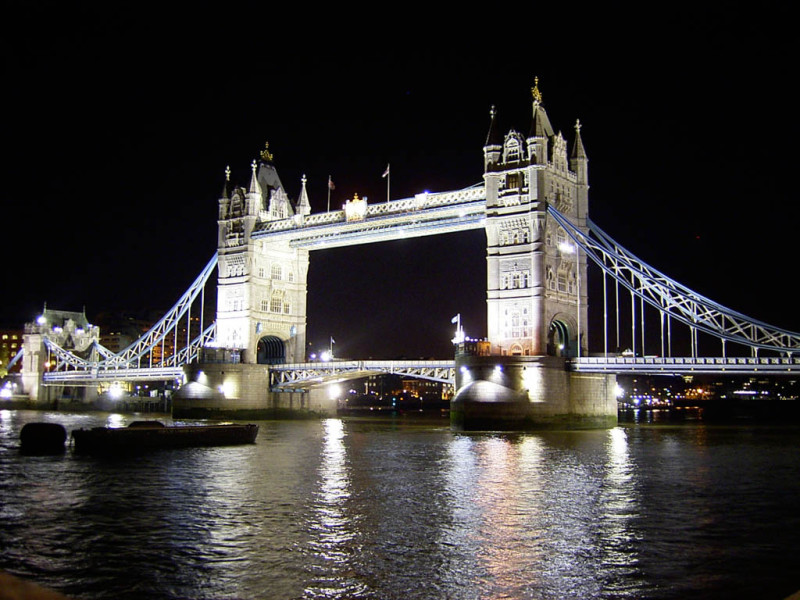 A side shot of the bridge from the Queenâ€™s Walkway on the south shore of the Thames River (walking towards London Bridge).

From London Bridge I took a quick peek at The Monument, a monument (get that eh!?) to remember the fire that ravaged the city at the turn of the century (I think – again, damn memory). I hopped on the tube and headed back to Morden. Now home, Iâ€™m chillinâ€™ out, watching some TV and hoping that a nightâ€™s rest will return my feet to their previous splendor.

In other news, my ticket to Ipswitch arrived in the mail today along with a very humorous letter from Sarah Joy. I am pretty excited to go see them, but Iâ€™ll admit, Iâ€™m going to miss the Kirklands.

Tomorrow (which by the time this is posted will be today) Iâ€™m hoping to meet up with Maryann, who lives in London centre. I think maybe Iâ€™ll hop on a tour bus for the day and then hook up with her after sheâ€™s done work. She is a girl I met through Globalfreeloaders.com, but couldn’t put me up due to space problems. However, we made plans to meet up anyway once I got here and after checking my e-mail yesterday, she said she was free Thursday night. Weâ€™ll see how it goes.