Alright, so I’ve been a bit piss poor at updating on a regular basis lately – and I wish I could say it’s because I’ve a plethora of other activities keeping me busy, but really I’ve just been lazy. My laptop isn’t connect to the Internet, and my Aunt’s computer is a bit crap in the OS department – so I end up meeting somewhere in the middle with my computer usage, and end up playing a load more guitar instead.

Anyway. This past Monday saw Vanessa and I head to Vancouver bright and early. As I mentioned, she had to catch a plane out of Abbotsford (about 45 min. this side of Van) on Tuesday and we figured we’d spend the day cruising about the city to say we’ve seen it.

I was there about 6 or 7 years ago when Cristy’s mom took us, and it was cool then, but now being at the helm of the trip I was keen to be able to run around and frolic as I like – not that Cristy’s mom is ever opposed to frolic’ing… I think we were just more in a drive-a-rent-a-car mode then.

The day before we left I put a request through Globalfreeloaders to see if I could set up a place to stay that didn’t involve unpacking my muddy (and now likely very mouldy) tent – and sure enough I got a reply. A gent named Simon (what are the odds that the limited amount of times I’ve used GFL I’d get to stay with two Simons?) said we could crash at his loft apartment right down town.

On the way to Vancouver there is some amazing scenery, travelling through Manning Provincial Park and the whole Hope area. We stopped at the site of the incredible Hope Landslide back in ’65. Basically half a mountain fell on the highway, much to the protest of a lake that was sitting beside it – quickly relocated (not by choice, but by force of nature) throughout the valley. 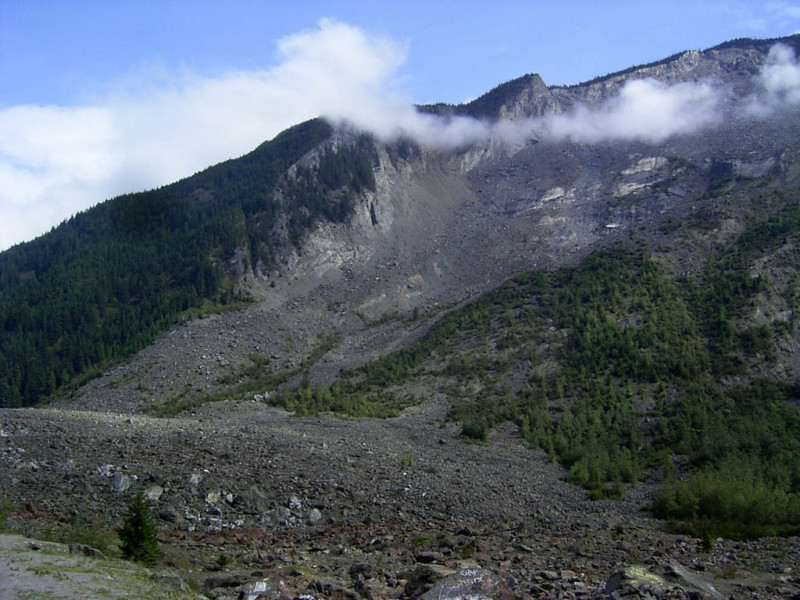 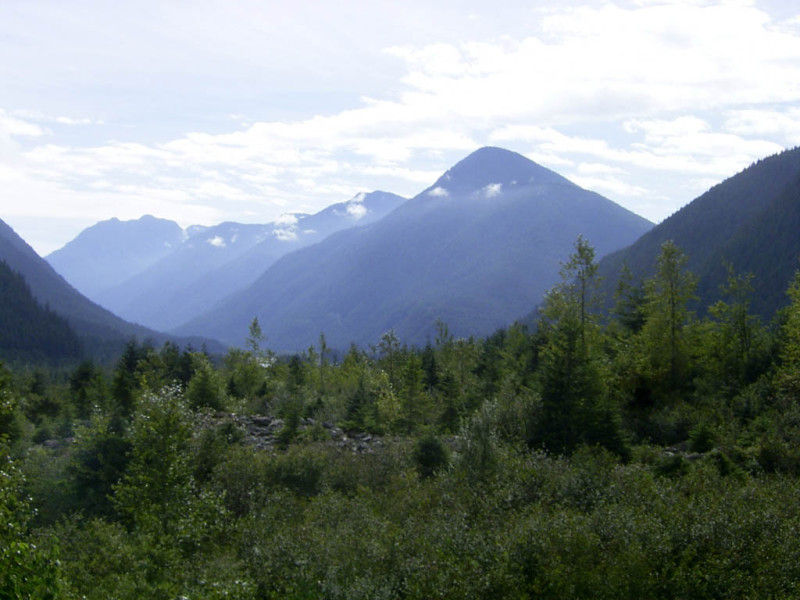 A view east from the site of the Hope Slide

We hit the city proper at about 2 p.m. and with a little help from a Shell station attendant we found Simon’s place. Simon had mentioned that he’d be out until about 8:30 p.m., so we parked right out front of his place – praying that the fact that we were HALF legally parked would score us points with any passing traffic cops (I mean, how do you tow half a car?).

Simon’s place is just south of Science World, which is at the eastern most edge of the downtown peninsula. We walked up and along the southern shore of False Creek towards Granville Island – the first stop of our on-the-cheap whirlwind tour of Vancouver. The city is designed for walking, as there are a good number of pedestrian and bike paths along the scenic seaway (waterfront). 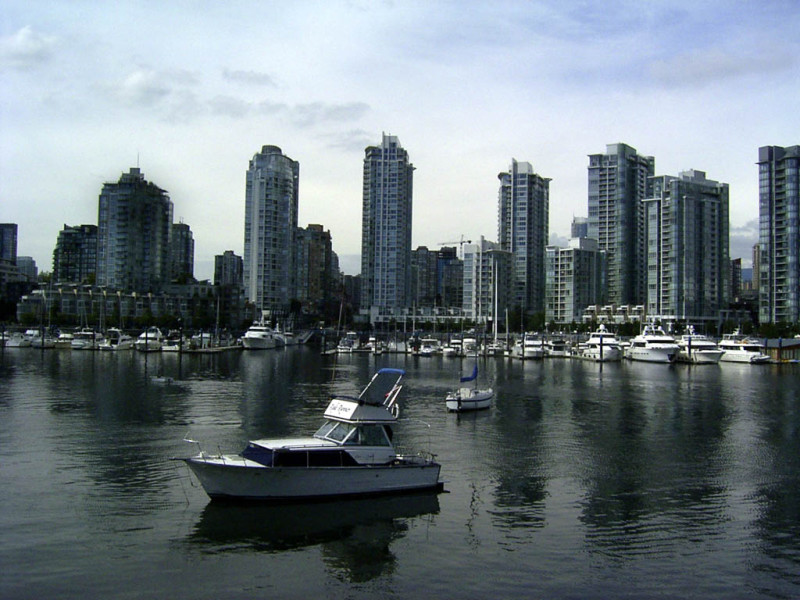 After about an hour or so we reached Granville Island, a little section of Van that is loaded with tiny shops, restaurants, a park and a really nice market. The island is overshadowed by Granville Street Bridge, the start of which we never saw. I was dreading having to hike back south to find the start of it and then having to trek up it to get across to the city centre, but my fears were put to rest when we stopped in the Granville Info Centre and I was told of a little ferry that takes people across for $2. Not too shabby.

We grabbed a bite to eat at the market and then headed to find the ferry. “Ferry” as a term has been re-written in my head since travelling. I picture the gargantuan ships that took me from Stranraar to Belfast or Italy to Greece… this “ferry” however more closely resembled the type of boat you’d bring in the bath with you (and would very nearly fit).

The boat dropped us off at the Aquatic Centre (whatever that is) and we continued our hike north along the coast, past beaches and other explorers, towards Stanley Park. By the time we reached the park we were pretty tired of walking, but came up with a plan that would get us at least to a couple points in the forested land that makes up the north end of the city. While devising path routes and examining points of interest on a big map an old guy on rollerblades wheeled up to us and asked if we needed help. Feeling pretty confident I knew what we were doing I was about to say no… but he launched right in to telling us that if we didn’t feel like trekking around the park armed only with two feet and a somewhat tired heart-beat, we could grab the free trolly… Wha? Free trolly? Awesome! And so we did. We took the trolly all over the park, hopping off whenever we wanted to see something and then catching the next one (usually 10-15 minutes later). It was excellent. 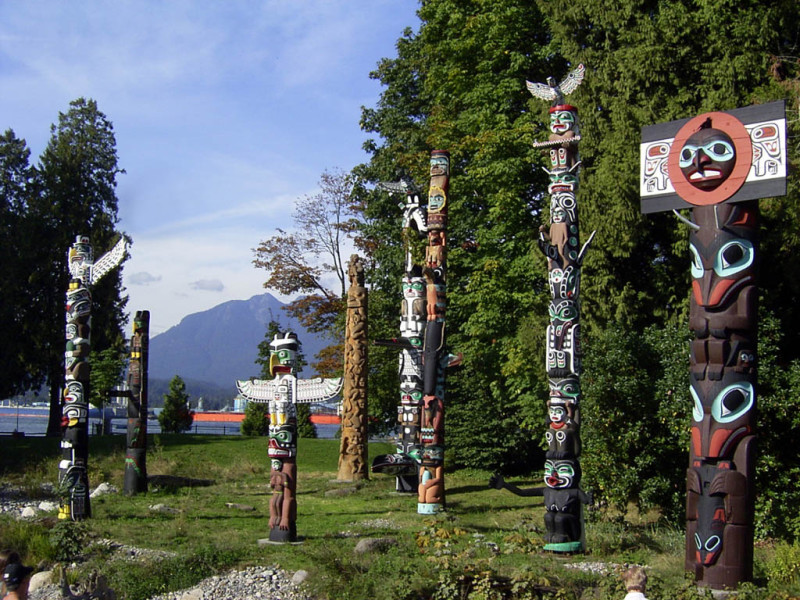 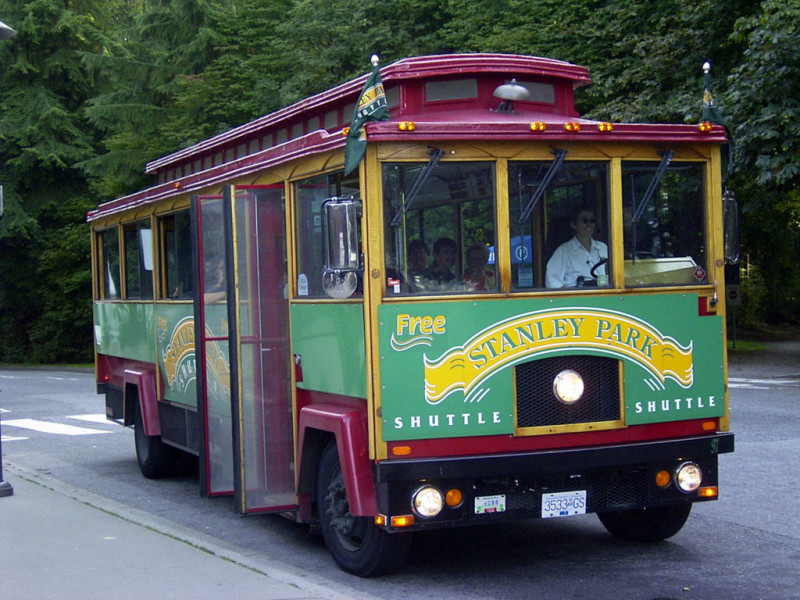 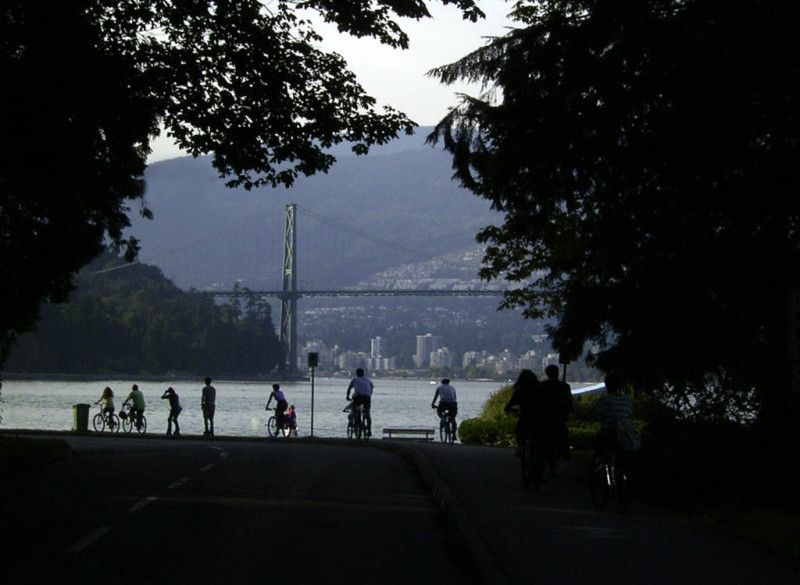 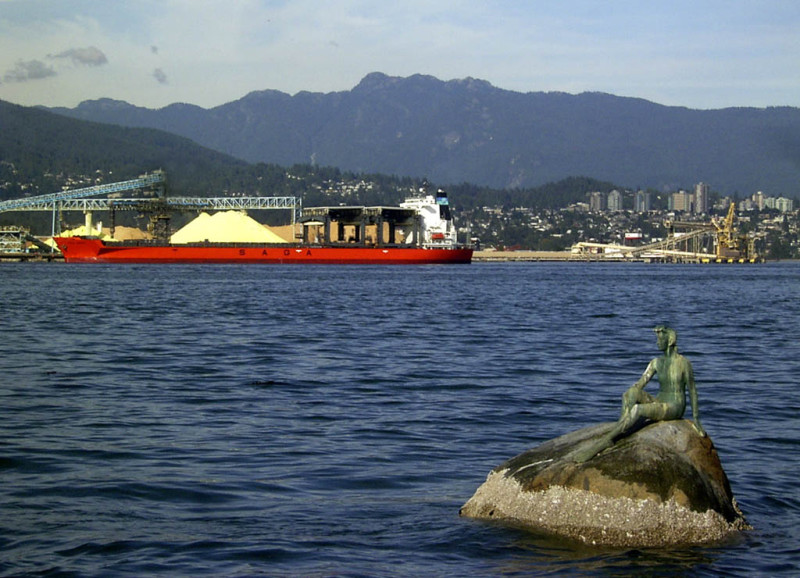 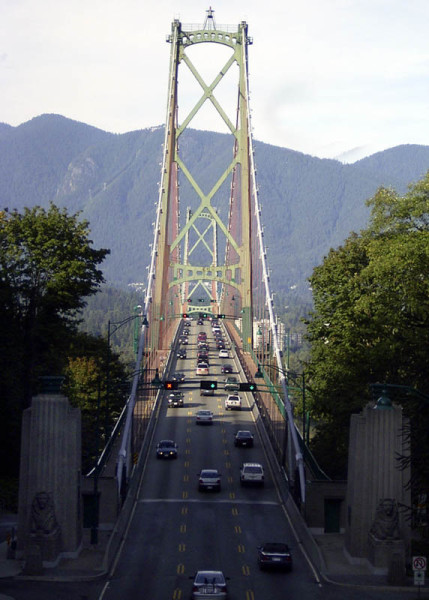 The 99a runs right through the park and on into North Van. I guess the Guinness Family owned all the land across the water and built the bridge to encourage people to buy their real-estate. 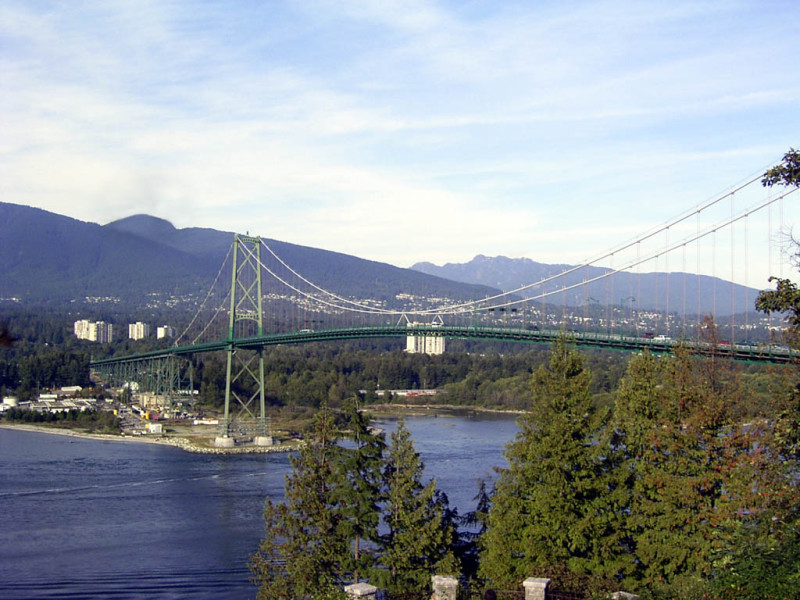 After spending a couple hours in Stanley Park we began our walk down to Gastown, the last stop on our visit before heading back to Simon’s. It was a long, but nice walk – as it went right through the financial district, which is loaded with some great looking buildings. Gastown is a cobblestone section of the downtown that reminded me of a melding of Queen St. and King St. in Toronto. Lots of little shops, cheap to posh restaurants, etc. We found an excellent Greek place to eat that had a steak and prawns for $13.99 – even on a limited budget, I couldn’t say no. However, considering that with my meal, a pint, and lunch the entire day had only cost me this side of $30… I can’t complain – especially with free accommodations for the night.

After dinner I called Simon and we headed down to his place. We were going to take the SkyTrain initially, but after looking on my little (and recently purchased) map of the city, it would appear that it wasn’t much further just to walk down to his place. What we didn’t realize was we were about to enter the East Hastings Street area of town – esentially this is where you’d go should you be looking for crack, smack or any other substance to insert into your head – oh, it’s also good for hookers (well, hooker junkies at least) and a wide assortment of low-brow, big forheaded creatures. After assuring Vanessa that if she walked any quicker trails of fire would be left behind her – and that would attract the riff-raff, as they’re always looking for heat to cook up on – we made it through and got to Simon’s.

Simon and his apartment were incredible. Basically the building his place is in was an old warehouse that was converted into high-priced apartments. Simon himself was really cool. I didn’t really get what it was he did for a living, but he worked from home and was going to school for leadership classes (he’s 42 I think?).

We left first thing in the morning and headed to Cristy (oh yeah, I forgot to mention – I got a message from Cristy saying it was cool if I come visit). We only had a couple hours before I had to drive Vanessa to catch her plane, but we had time to take showers and get a quick tour of White Rock (the Van-satellite Cristy lives in).

I got Vanessa to the airport in Abbotsford, and hung out with her when her flight was a tad delayed (she bought me lunch for my troubles! Actually I think she just felt sorry for me and the fact that I have no job). After some heartfelt goodbyes she boarded and I headed back down Zero Ave (it runs RIGHT along the boarder with the US) and back to Cristy’s. The street is crazy because it is literally road, ditch and road… the second road being on US soil. I mean, why are all these terrorists getting caught in trunks at boarder crossings when they could just walk out to Langley and cross at some farm? 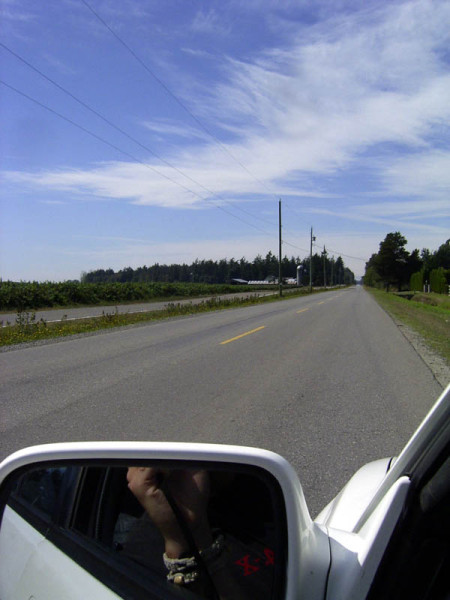 Yup… largest undefended boarder. I’m in Canada, the road across the grassy meridian is the US.

I got back to Cristy’s in time to see her off to work. I chilled at her place watching Canada school the US (again) in World Cup hockey. I was joined by Cristy’s sister Alison (who lives down the hall) and her out-of-province ex-boyfriend (apparently it was Out-of-Province Ex-Boyfriend Day).

Cristy got home and her and I hung out, drank some wine and went through tonnes of old photos.. it was very cool and I need to see if she’ll make me copies, as I have none prior to me moving home from Penticton.

The following morning Cristy cooked me breakfast (I cannot for the life of me remember the last time I was cooked breakfast!) and we went for a walk down to the beach. It was easy going getting there, but to get back we needed alpine gear and a few day’s suplies… seriously, the climb was deadly – reminded me of my time in Edinburgh, a city I’m CONVINCED mocks all physics by having every road lead up hill, no matter what way you are travelling. 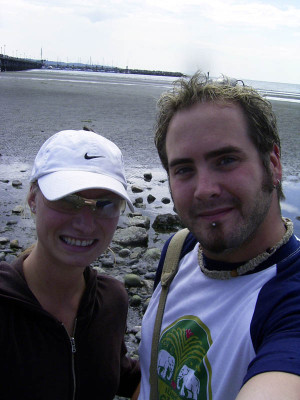 We got back to her apartment and I barely had enough time to quickly shower off the sheen I’d gathered from my crazy walk back up from the beach before we were out the door and I was following her to her spa where she would give me the final directions on how to get back onto the highway and back to Penticton.

Some quick goodbyes and I was off with promises that we’d both visit again – now that we live so close and all (when did four hours become SO close?). And that was my trip… it was a blast and I really wouldn’t be sad to have to move to Vancouver sometime in the near, or not so near future.