I meant to mention this sooner, but as is so often the case around here, I got caught up doing other things. Most people in the China blogsphere are well-aware of Sinosplice, a blog and Chinese learning resource by Shanghai-based expat John Pasden.

Last week Sinosplice.com went live with a completely new design, and I’m quite proud to have been a part of it. John’s blog is one of the blogs I “came to China on” and have continued to follow in my time living here. Interim John and I have become friends, and I was quite excited when he approached me to help him freshen up the design of the site. 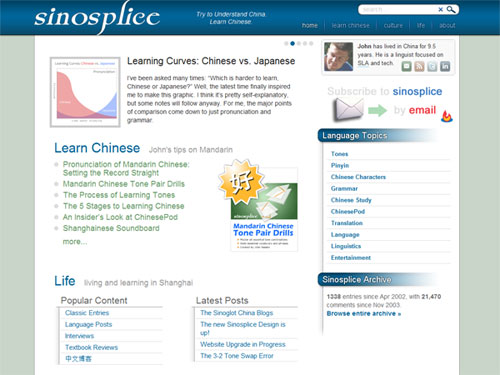 My excitement was only slightly dampened by the trepidation of redesigning a site that is very well-known, not just for its content, but for it’s now infamous “John Pasden Gator Green“. Love it or hate it, Sinosplice was known for its green colour scheme, and we did away with pretty much all of it. Interestingly, in searching for the original reference to the now defunct Sinocidal post that coined the term, I came across this post from Sinosplice, where John stated nearly three years ago:

Iâ€™ve been pondering a redesign lately. I wonâ€™t have time to do it until late summer, but Iâ€™m thinkingâ€¦ Less green. More white. More space. Wider than 800 pixels.

Both John and I agreed that a fresh design was in order, and though we attempted to pay a bit of tribute to the past with some green accents, largely, it’s a whole new look. The principles John wanted to capture were a more open design that let the content breathe a bit more and made it easier to navigate. I think we accomplished this, and feedback so far has been positive.

Working on Sinosplice completes a bit of a triumvirate of China-centric blogs that were initial mainstays when I first arrived in China. The two others were Mask of China (designed in 2007, and now featuring a different design) and theÂ Peking Duck (redesigned in 2008).

John’s done some cool A-B comparisons with screenshots on Sinosplice, so if you care to take a closer look at the changes, check it out.