I’m not looking to stir up the heat that took over the comments of my last post on the topic, but the crafty Chinese shanzai crew are at it again. Loathed to wait for an official release of an Apple-branded Netbook, a manufacturer in Shenzhen has come up with its own solution–the WF188. 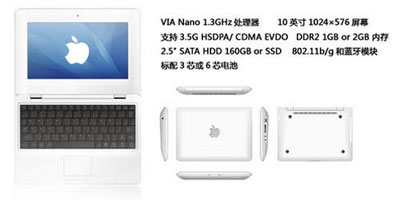 I love that the company’s put Apple’s apple backward. And for Apple fanbois, that’s not the only thing that’s backward. The faux Apple-only runs an MS or Linux OS. But, as the Gizmodo article referenced above hinted at, there are ways around that.

To see if I could find out what the cost is, I hunted around Taobao for anyone selling these things. However, I could find only this, which, despite its older MacBook picture and “?????” label, seems to be just a MacBook Air.