A couple of days ago Silicon Alley Insider posted a chart displaying the differences and similarities between Chinese and US Web usership. The chart mines and melds data from the Pew Research Center and China Internet Network Information Center (CNNIC, why isn’t it CINIC?).

There were no huge surprises, but it does give a pretty good overview of how the world’s top two Netizen bases use this fandangled thing we call the World Wide Web. 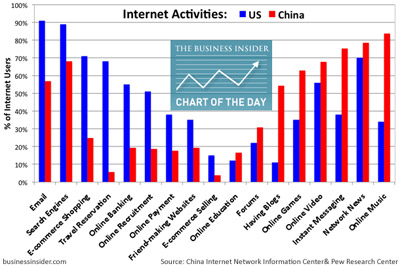 More than anything else it displays the mostly youthful adoptation of the Internet in China, and the relatively more mature usage in the US. E-commerce shopping, travel reservations and online finances are all astronomically higher in the US, while online music, online games, blogging and instant messaging are heavily slanted to Chinese usage.

Online banking: With almost three times as little usage in China as in the US, it’s clear China isn’t jumping into managing its finances through the Web. Having recently wrestled with the Chinese online banking system first-hand (with BOC), I can easily see why Chinese Netizens are reluctant to bother. To even get logged on, I had to download a special security applet, use Internet Explorer, and while using Vista, had to (ironically) turn off virtually all built-in security features for Vista and Internet Explorer to avoid the applet from crashing. When calling the bank for support, the staff simply said I should be using Windows XP and Internet Explorer for it to work. On a Mac? Get bent.

I don’t know if this is the attitude of all China’s banks, and if it isn’t, please let me know so I can immediately switch. But this is not the only thing keeping online banking, reserving travel, e-shopping and using online payment methods low in China. Credit cards, while ballooning, are still not in wide use. This makes more traditional (bank transfer) or inventive (mobile payment) the more common method of payment–which wouldn’t show up in these numbers.

Instant messaging/email: With one-third more email users in the US than in China, and conversely nearly twice as many IM users in China than in the States, it’s easy to see a correlation between the figures. Ten to 15 years ago, when Internet usage was growing in the US, email was the medium du jour for correspondence. Instant messaging, while now widely used in the US (40 percent), suffered under a pretense of being a less mature way to communicate.

China, meanwhile, jumped onto the Internet when IMing had become mainstream and it is now much more common for a Chinese person to have a QQ# than an email address.

Online music: China absolutely clobbers the US in online music usage, and doing a quick search on mp3.baidu.com for any Top 40 artist on the planet will reveal why. However, I think there are legacy dependencies in the US at play here. Many people in the West invested in large CD-based stereo systems not all that long ago, and so there is still a value for offline music purchases. The West also largely has a “bookshelf” culture that digital music cannot quench.

China doesn’t much suffer (I’m a “collector” of books/CDs/vinyl, too, so use “suffer” loosely) from this, and again jumped in later in the game–making an MP3 player (or MP3-enabled mobile) the first portable music player for many people. Whether the music industry will find a way to cash in on this has yet to be seen.

Having blogs: I saved this one for last because it was the one that genuinely surprised me. I would have assumed it was much closer, but according to these figures, Chinese Netizens are five times as likely to be a blogger than an American.

This is also very interesting from a sociological standpoint as the exchange of ideas and rate at which a meme can fire through the US is already lightning fast–in China, it’s lightning fast times five, which basically means some memes are so fast they travel back in time.

This figure, of course, doesn’t take into account the “quality” of those blogs, and I imagine there’s more than a fair share that simply act as a stage for photos of victory sign-making college students who spend entirely too much time discussing shopping and how cute cats are.

Tight Internet censorship makes it a tough road for hard-hitting Chinese bloggers. But with about 165 million people blogging in the Mainland, they’re definitely out there–and growing.

As always, I’m curious about others’ opinions on these figures. Please leave your thoughts below.