It’s been 2009 for a little less than a week and already the folks in charge of “harmonizing” China’s Internet are taking their jobs far too seriously.

From Danwei.org: China Internet Illegal Information Reporting Center (????????????????), under the Internet Society of China, has announced a list of Web sites which contain “large amounts of low and vulgar content that violates social morality and damages the physical and mental health of youths.

“The list includes a virtual Who’s Who of the Chinese Internet, including domestic search giant Baidu and its little-known competitor Google China. It goes on to warn the sites that should they not remove the “low and vulgar” content immediately, they will be forced to shut down. 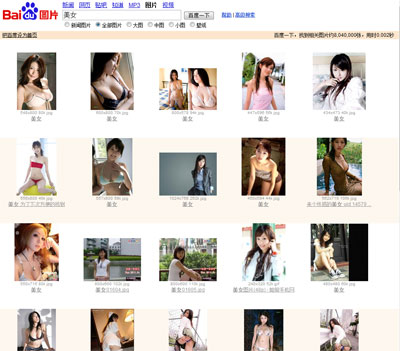 A Baidu image search for "??" or "Beautiful Girl".

Though the crackdown is aimed at cleaning up the mores of Chinese netizens, fears abound (in western media at least) that this may just be a ramping up of censorships to come.

With the 20th anniversary of Tank Man’s famous stance coming later this year, it would surprise this blogger little if tighter reigns were on the horizon. However, that no less than seven, seven!, government agencies were in on the announcement to clean up China’s wicked Web makes one wonder if these guys are simply suffering from a lack of affections from their long john-donning wives during Beijing’s chilly winters.

I mean, it takes a pretty righteous person to believe they know what is best for a nation of free-thinking (and seeing) individuals. And that we can pretty much be assured that Zhongnanhai isn’t filled with a secret coven of conservative religious fundamentalists, it is somewhat amazing to me that the Government would feel a “sanitized” Internet is its responsibility Hu-given duty.

But then, China’s always had a solid Keynesian-esque “make work” system, and so perhaps this is all just a way for seven government agencies to justify their budgets in a declining economic climate.

A full list of sites sent notice to clean up their act: