Here is my meager attempt at a quick overview of Suzhou, with a few maps, photos and commentary. As might be gathered from the fact that I’ve lived here now for 3+ years, I rather like Suzhou. In my opinion it offers the perfect combination of old and new China. It has a multitude of ancient scenic sites, from virtually every dynasty to have graced China’s long and twisty history. It also contains one of the most well-stocked and well-organized development zones of any Chinese city.

View Suzhou in a larger map

This is a Google map I semi-frequently update with items around the city — particularly places I visit or recommend. 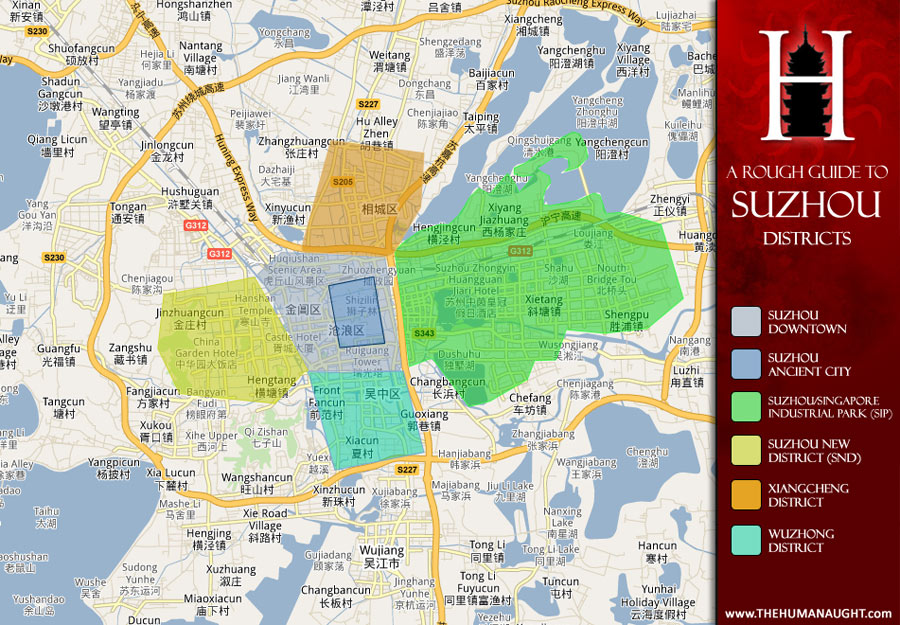 Here is a rough layout of Suzhou’s various districts. This is only meant as an approximate guide, and all district “borderlines” are simply my best guesses. Click the image to view full-sized.

These are some random photos from my Flickr stream. If you’d like to see more, check out my Suzhou collection, or more specifically my Around Suzhou set.

Use of Photos Notice
All my photos are available under a Creative Commons Attribution-No Derivative Works 3.0 Unported License. Basically this means you are welcome to use any of these photos (personally or commercially), but attribution needs to be given (ie. photo by Ryan McLaughlin). This does not allow derivative works, meaning you cannot edit these photos to use in other works. They must be displayed “as is” and with credit given (link-back preferred). Thanks.

This was originally written for ChinaTravel.net, published on April 24, 2009.

Most of us who move to China for the first time arrive ready and willing to experience new and challenging things. We want to walk paths we’ve not walked before, taste foods we’d never try back home, and drink it all up as part of the ‘China Experience’. But after living in China a while, the traveller-adrenaline wears a little thin and it’s nice to have a few comforts of home.

I moved to Suzhou nearly three years ago largely because I could experience Chinese culture in depth and also have access to familiar amenities there. This relatively small tourist city has the distinction of being one of China’s oldest, while sitting right beside the country’s most modern metropolis, Shanghai.

Despite their close proximity, the two cities couldn’t be further apart in fundamental ways. Shanghai’s skyline grows ever-higher regardless of what is flattened in the process, while Suzhou embraces and works to preserve its two-and-a-half millennia of history.

The city, not shy to development in its own right, has found ways to weave its many historical landmarks into the fabric of the ‘new China’. Divided in three, Suzhou is made up of the original old city, surrounded by a large moat-like canal just as it has been for thousands of years, which is flanked by two large and modern development areas – Suzhou New District (SND) and Suzhou Industrial Park (SIP).

For centuries, foreigners in China have given Chinese cities Western names suffixed with “of the East” in an effort to add to their circumstance a level of comfort and similarity by comparison. Spending even a moment in Suzhou leaves little doubt as to how it came to be known as the “Venice of the East”.

An endless maze of canals spreads like a watery web in all directions across the city. Fed by the millennia-old Grand Canal, the many waterways in turn give sustenance to the city’s primary attraction – the Classical Gardens of Suzhou.

Nine of the gardens are UNESCO World Heritage sites, but much like Chinese temples, once you’ve seen one, it feels like you’ve seen them all. Most tourists head directly to the Humble Administrator’s Garden, Suzhou’s largest and most famous patch of greenery. It is often crowded, and quite pricey. A nice alternative is the nearby Lion’s Grove Garden, featuring a stone maze and some beautiful, tranquil scenery.

Also in the neighbourhood is the Suzhou Museum, which houses a collection of Ming and Qing era art and other ancient knickknacks. Perhaps most interestingly, the museum was designed by internationally renowned Chinese architect I.M. Pei (of Louvre fame) whose lineage descends from one of Suzhou’s most prominent families. The museum was his final architectural project before retiring.

The city’s most famous tourist stop is Hu Qiu (Tiger Hill), where a pagoda built during the Northern Song Dynasty (959–961 AD) leans precariously atop the ancient tomb of King He Lu (514–496 BC), ruler of the Kingdom of Wu, of which Suzhou was the capital. Though the place can get quite crowded during the tourist season, it is well worth the visit. On top of being loaded with a number of different historical spots, Tiger Hill also features a garden of Chinese penjing (the precursor to Japanese bonsai).

For visitors not afraid of using their two feet, a great way to get back to the city is to walk down Shan Tang Jie (Shan Tang St.), a small road that runs along a canal from Tiger Hill to the Shi Lu shopping district. The road offers a glimpse of traditional Suzhounese life, transporting even the most unimaginative visitor back in time.

Suzhou is a living history book, and as a Canadian, I’m not used to living in a place where I can stand on man-made structures that date back 2,500 years. I’ve never been a huge history buff, but Suzhou makes me appreciate history more than I ever thought I would. Even after several years, I still find there is a lot I haven’t seen.

Tourist spots aside, we all need a proper pint sometimes, and despite its antiqued façade, Suzhou does well to fill my belly with more than just rice and noodles. Most of Suzhou’s nightlife centres around Shi Quan Jie, a narrow road that runs east-west near the southern end of the city. Though just shy of 2 km long, the street offers a motley collection of bars, restaurants and shops. Much of the activity tends to be on the eastern end of the street, but my preferences lie west of Feng Huang Jie (Feng Huang St.), at what I consider two of the best places in the city to patron the Shamrock; with pool, darts and pints of Guinness on tap; and the Bookworm Suzhou, a relatively new addition to the city that features inexpensive pitchers of Sapporo, some great cheesecake, occasional live music, and a whole lot of English-language books for loan or purchase.

For many foreigners in Suzhou, the downtown core is a “trip in”, as the bulk live in Suzhou Industrial Park (SIP), a forest of high-rise apartment buildings, upscale restaurants, and pretty much anything else that might cater to a well-paid expatriate demographic. The best spots in SIP all overlook the rather scenic Jinji Hu (Jinji Lake), where every type of food from Tex-Mex to Thai can be got. Though the district is devoid of any real travel/tourist spots, if a visitor has a bit of extra time in the city, a walk along the lake shore accompanied by a meal on Li Gong Di or Rainbow Walk makes for a nice relaxing evening to wash away some of the stresses that come from travelling in China.

The metropolitan aspects of Suzhou are diverse and offer more than enough to fill a traveller’s agenda; however, there are some great places to visit just outside of town as well. Time permitting, the area’s well-preserved water towns are a must see. All three of Jiangsu province’s famous watertowns are located a stone’s throw away from Suzhou and are easily accessible by car or bus. Much like the aforementioned Shan Tang Jie, the water towns offer up traditional local life in a bit of an aquarium-like way. Though the towns are tourist spots which charge admission, they are also home to a collection of Chinese who show stoic indifference to the swarms of tourists peeking in their windows and clogging up their very narrow streets.

Though 2,500 years of continual civilization has left little actual wilderness around Suzhou, there are a few small mountains in the eastern end of the city that provide a nice hike (in the common Chinese “stair climbing” fashion) and panoramic views at their summit. The closest climbs are Lingyan Shan (Spirit Rock Mountain) and Tianping Shan (Flat Peak Mountain) in Mudu, a small township attached to the south western end of Suzhou. Slightly further out, on the shores of Taihu (Tai Lake), is Dong Shan (East Mountain), a good hike where you can visit Zijin Temple, constructed in the Tang Dynasty (618–907 AD). While there, be sure to hunt around for some Biluochun Tea – a locally grown tea touted as one of the ten best in China.

Despite, or perhaps because of, the plethora of map-marked places to visit in and around Suzhou, my favourite past-time remains simply letting myself get lost down some of Suzhou’s many back alleys and side streets. Micro-communities of low-lying houses, shops and courtyards are abuzz with day-to-day happenings, all in cramped lanes barely a car-width wide. It’s here, swathed in the nasal twang of Suzhou Hua (the Suzhou dialect) and sweet smells of local fare, that you get a real sense of what Suzhou is, and has been for centuries upon centuries: a city full of artists and artisans who are much more likely to greet you with a smile than a scowl.