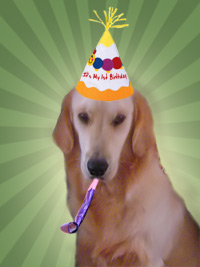 Alright, I never wanted to become one of those people that have a dog and they go on and on about their dog like it was their child. I never did.

But I also never expected that such a connection could be formed between myself and a dog. I’ve had lots of pets, including a number of dogs, throughout my life, but Addie is the first dog that was “mine” as an adult.

She’s also the first I’ve raised since a puppy, and I think that brings a bit too it as well, as watching her grow, learn and develop her own personality surely has much to do with the ties that form between two living things.

It doesn’t hurt that she’s just the best dog in the entire world. Doesn’t bark, doesn’t chew our stuff, doesn’t potty in the house, can be left alone for long periods of time uncaged (we’ve never had a cage for her), knows a decent number of tricks, and generally listens to (if not follows) our instructions. She’s awesome.

And today she turns 1 year old – so, Happy Birthday Addie!

We got Adobe (named after that which paid for her) from a local pet shop this past February. We had talked about getting a dog, but had always put it off because we weren’t sure how permanently we were staying in any given place.

Getting her at the pet shop, she was considerably more expensive than buying her at the local pet market (3000 RMB vs. about 1000 RMB at the pet market for a pure breed), but puppy survival rates from pet markets are pathetic, and I felt some ethical objections to supporting China’s version of a puppy mill. 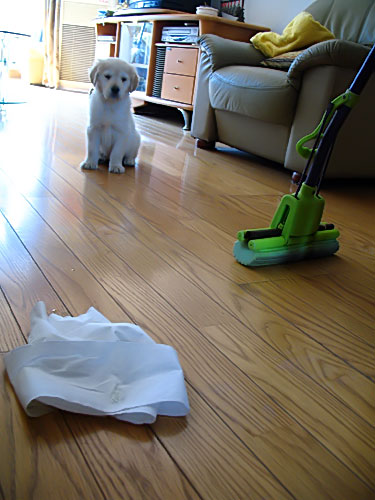 At the time we were living in a 3rd floor apartment, so house training was essential – but proved impossible. Fortunately hardwood floors made for quick cleanups.

Despite not understanding where she was intended to pee, she was a quick study when it came to treat-earning tricks and by four months old she had learned sit, stay, shake a paw/give me five, roll over, take a nap/play dead, come, stop, off, no, ok, spin – and has since learned fetch, catch and sit pretty (I’ve sort of slacked off in training her new tricks).

Though we were concerned that four and a half months of improper house breaking might have created a life-long bad habit in her, once we moved to our new place in July and Addie had a backyard, she almost instantly took to going outside.

In September she caught us off-guard and went into heat for the first time. It was a messy month, but will always be remembered with a smile, as she trotted around the house in leopard-print undies.

Being on the first floor, she’s made lots of friends with our neighbours, their kids and their dogs. We regularly have an entire daycare group come by our fence begging for her to come out and see them.

Chinese, perhaps because of a penchants for small dogs, seem to be more afraid of large dogs than most, and I’m always excited to help dispel the idea by letting little kids come and pet Addie and see she’s very friendly and gentle.

Anyway, all that’s to say she’s impossible not to love, and I feel extremely fortunate that we happened to get such a fantastic dog. She truly has added and continues to add a joyful element to my life. And though I maintain that dogs are dogs and kids are kids, that doesn’t mean I can’t love her like the valuable member of our family that she is.