With a bunch of people having been killed, this situation in Burma is fast turning into a nightmare, but it might be one that yet has a positive outcome.

Not at all to marginalize the deaths of those unfortunate to get in the way of the Burmese security forces’ “warning” shots (incl. Japanese journalist Kenji Nagai), but I do hope the movement pushes ahead.

I realize that’s easy to say from here in the safety of my home, but hear me out. If the protesters continue their peaceful protests and the junta fucks continue to respond with violence and repression – there’s an excellent opportunity for Burma to finally shed its illegitimate leadership and get the [*dem*] they’ve been long promised.

“Remember that all through history the way of truth and love has always won. There have been tyrants and murderers and for a time they seem invincible but in the end, they always fall — think of it, ALWAYS.” – Mahatma Gandhi 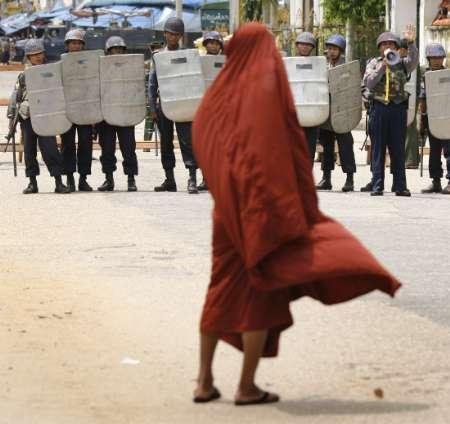 China’s response has been just as expected for a nation with its own sketchy past when it comes to protesters and bullets. They clearly see the PR nightmare of Olympic proportions this could lead to if they’re not perceived to be doing their best to cool the generals’ jets.

That said, they’re not exactly leaning hard on the country, more just giving them the ole “nudge, nudge, psst” routine. But one sort of expects that from a country like China. I mean, we are talking the country that is the Axis of Evil’s golf buddy.

What irritates this blogger is the fact that India is pulling the same routine. As the world’s largest [*dem*], following China’s lead is lame. But then, China comes into the equation there as well.

China, through its Three Monkey foreign policy, has developed tight ties with Burma’s military-led government and as such is reaping major rewards. Of course this creates an impossible situation with countries that want to hold themselves to an ethical standard of some sort. 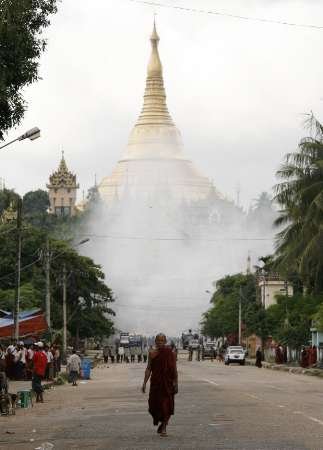 Now India is playing the razor’s edge of wanting what China has in Burma, but not sure how to do it without compromising its integrity. Similar to Google in China in some ways, India is desperate to push into Burma as much as it can to gain some of the Buddhist nation’s natural wealth. Until now they’ve been somewhat silently doing so, but now the spotlight has flipped on them and public outcry has come from its citizens.

India’s largest English newspaper, The Times of India, has called for the government to “quietly urge [Burma] towards [[*democracy*]]. We are not like China. We champion democratic values. Do something.” (from The Guardian)

Granted, some of India’s desire to get in bed with Burma is in effect to limit China’s control in the region, but it does create a troubling question – who’s at fault when a free nation begins to buddy with a not free nation to stop another (bigger) not free nation from expanding.

Anyway, neither here nor there… well actually, it’s precisely “here” and “there”, but… back to the issue at hand: be sure to check out the “Support the monk’s protest in Burma” Facebook group for a number of ways you can get involved and show your support for those in the front lines of putting an end to oppressive regimes.

A great thing that’s being displayed with the situation in Burma is that it’s showing that it is getting more and more difficult for tyrants to repress their people, and keep it quiet. Even with the government creating an Internet blackout, people are still getting photos, videos and messages to the outside world.

Take note oppressive regimes – the time of blanket cover-ups and mass disappearances is coming to an end.

Lets all keep our fingers crossed Aung San Suu Kyi figures out how to unlock her front door and lead the revolution.

Last night I had a dream
That the world had turned around
And all our hopes had come to be
And the people gathered â€˜round
They all brought what they could bring
And nobody went without
And I learned a song to sing
The revolution starts now. – Steve Earle, “The Revolution Starts Now“

H/T to Jay Gatsby for the photos, found via the Facebook group – many more here.