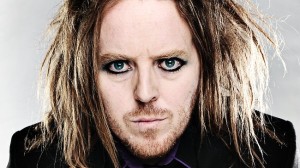 Last weekend I was introduced to comedian Tim Minchin by my friend Nicki. Thanks to her I’ve spent the last few days firmly entrenching myself in the Tim Minchin fanclub, watching damn near all his videos on Youtube, as well as his “Ready For This?

Minchin’s act is a combination of comedic songs (he’s an impressive pianist), regular standup and poems. There are so many great bits that had me in tears, including “If I didn’t have you” (which was the video that first sold me on him) and “Fuck the poor“. But his beat poem “Storm” was particularly clever, and the animated short film that was created for it makes it even better.

My favourite part (emphasis mine):

â€œHm thatâ€™s a good point, let me think for a bit
Oh wait, my mistake, itâ€™s absolute bullshit.
Science adjusts its beliefs based on whatâ€™s observed
Faith is the denial of observation so that Belief can be preserved.
If you show me
That, say, homeopathy works,
Then I will change my mind
Iâ€™ll spin on a fucking dime
Iâ€™ll be embarrassed as hell,
But I will run through the streets yelling
Itâ€™s a miracle! Take physics and bin it!
Water has memory!
And while itâ€™s memory of a long lost drop of onion juice is Infinite
It somehow forgets all the poo itâ€™s had in it!

You can check out Tim doing the bit live here. I’ve got two other Minchin items queued up for as soon as I find time to watch: 2007’s “So Live”, and also a documentary that was made about Tim called “Rock ‘n’ Roll Nerd”.

If you like comedy, particularly clever comedy, be sure to check him out. You can also check out my newly created list of atheist comedians

for more godless jokers. I’m always on the hunt for others, so please share your favs in the comments.