I got an early phone call from my friend and neighbour Kevin today. It’s not odd that he called, he often calls, but it did seem weird it was only 9 a.m.

“Ryan, can you come outside for a minute, I need a hand.”

In slippers and pajamas I wander out into the apartment building’s entrance to see what’s going on and find Kevin carefully examining what looks to be a couple pieces of paper. 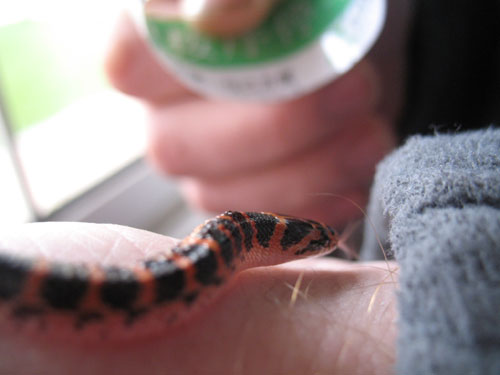 “I’ve got a snake,” Kevin says, too focused on the critter to see my surprise.

Turns out that he had innocently thrown a few stickers that the security guards put on his bike (to tell him not to park in the landing) on the ground the night before. In what, we can only assume, was an attempt to score a free meal, a small snake managed to get himself completely and utterly stuck to all three stickers.

I tried to pull the stickers off, but they weren’t having any of it and began taking scales with them. So, with only a quick question of “do you think it’s poisonous?” between us, Kevin and I shooed (an all too willing to be shooed at the site of a snake) Maggie out of the kitchen and set to freeing our no-legged friend.

The snake, which was at most eight or nine inches long, was a bit tense when put it under running water, but ever so slowly we managed to free the little guy. Once freed, we snapped a few photos before putting him in a tupperware bin for transport to a nearby park.

I’m not sure if it was the snake’s small size, or its gratefulness at us freeing it, but not once did it open its mouth or appear threatening at all. And thankfully so, as Kevin learned later the darn thing is, in fact, poisonous.

According to Danwei’s “The Snakes of Beijing” guide (yeah, surprised me they had one too), our little stuck on stickers buddy is a Banded Red Snake.

The Banded Red Snake is one of the most widely distributed snakes in China. It is found in all of the suburban districts and counties. In the 1980s, these snakes were still being found in parks and gardens inside the Third Ring Road, even though they are nocturnal and thus difficult to spot. Perhaps because they like to lurk in old houses, all the renovation and rebuilding has caused their numbers to decline. Now they are only found in certain places, and are extinct from many areas.