Well, Spring Festival is upon me and Iâ€™m officially on holiday – though I guess technically Iâ€™ve now been on holiday for two days, which is nearly as long as Iâ€™ve been trying to update my blog, but with little to no success.

For some reason I just cannot get on to the area of the site where I post from. I learned that I can post from e-mail, but have to configure it in the settings, yet another section of the Blogger site I cannot access. Grr. So it is that Iâ€™m writing this in MS Word, and hoping that at some point in the not-too-distant future Iâ€™ll be able to post it.

The festival started with a bang yesterday morning at about 7 a.m. Actually, it was several bangs, and a big boom. They have these crazy fireworks here that are basically just a long line of string-tied, red (for luck) paper-wrapped, high-grade explosives and they sound like a bloody machine gun with a climatic cannon firing at the end.

Tom left yesterday morning, and so now Iâ€™ve the place to myself for the rest of the holiday. Iâ€™m mixed about it â€“ as I do like the company, but I also like the spaceâ€¦ and though Tom hardly ever watches TV, itâ€™s nice to be able to watch my episodes of The Shield whenever I like. Have you seen this show? Itâ€™s awesome.

About mid-afternoon I decided to head out and see if I could get some groceries before everything closed for the holidays… I, apparently, was too late. But having already descended the stairs, I figured â€˜what the hell… lets get some photos of where I live for the olâ€™ blog.â€™ 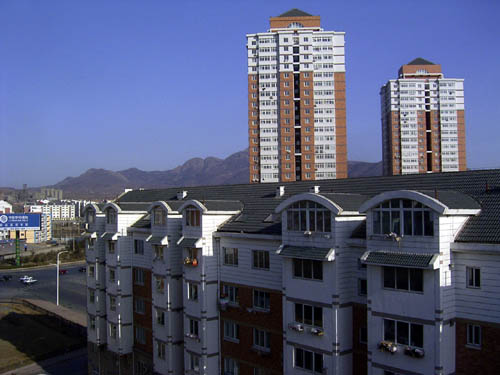 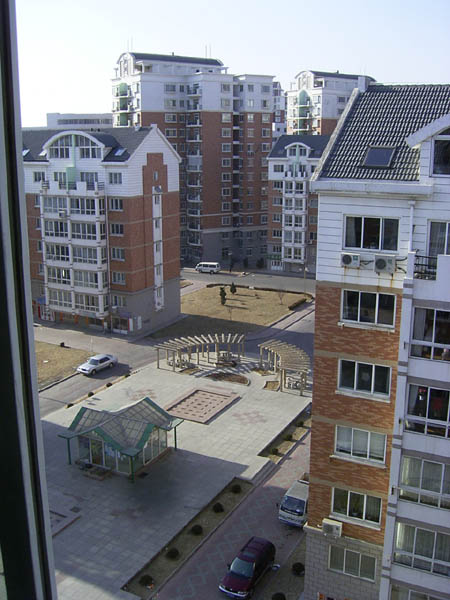 These were actually taken from my apartment window… 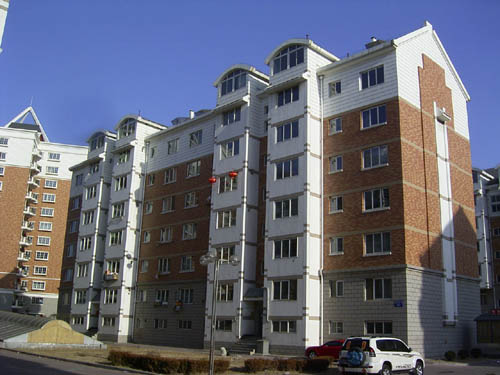 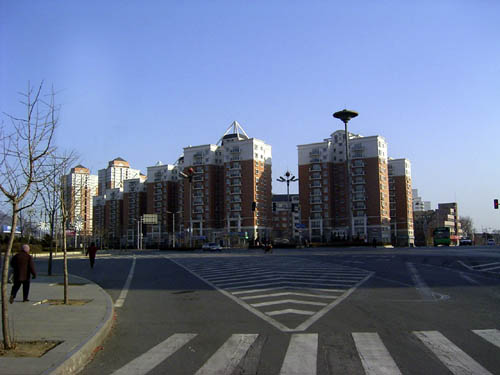 The first here is of my apartment building â€“ my apartment is right at the top, where the two round roof things are… the one on the right is my living room. The second photo is sort of a Sheng Bin Gardens â€˜from a distanceâ€™ type shot, to give you an idea of what the complex looks like… 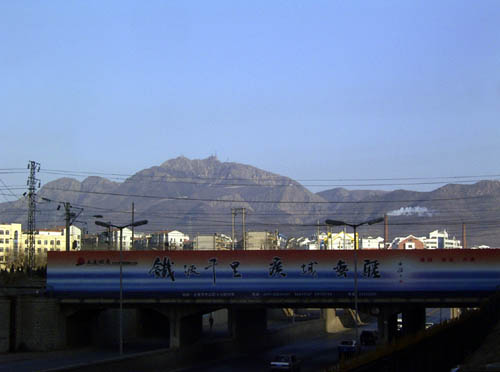 The mountain in the distance is Big Black Mountain… apparently it makes for some great hiking, nice views, but Iâ€™ll wait for spring to verify that.

For dinner I met up with the Matthews next-door. We were a little nervous to venture out into the fray, as safety standards are an issue with neither the fireworks manufactures nor those that light them off. However, we managed to find safe refuge in one of only a handful of open restaurants. The food was so-so, as we ordered a few chicken dishes, and Iâ€™m still not used to the bone-in style in which they serve their little chunks of ji rou here.

After dinner I grabbed some beer and hung out next door listening to music and watching fireworks. Though constantly going off, big shows of fireworks were a bit sporadic until maybe about 10 p.m. From then on you could pretty much look out any window and get a good show. As the last hour before the new year approached the sky was painted with bursts of colour, and the final 10-15 minutes is just not something I can really explain. I guess, picture every fireworks show youâ€™ve ever been to combined into one, think of the finale x10, but across an entire city… and youâ€™re close. It was amazing. I mean… I really would like to take this opportunity to apologize to any Chinese nationals that have recently relocated to Canada for our lack of any sort of firework lighting finesse. I think the Canadian ‘works are generally nicer (at $5-10 a burst… itâ€™s no wonder why)… but nothing Iâ€™ve seen on Victoria Day or July 1st could ever even remotely hold a flame to what I saw last night â€“ and Iâ€™m in a small town. 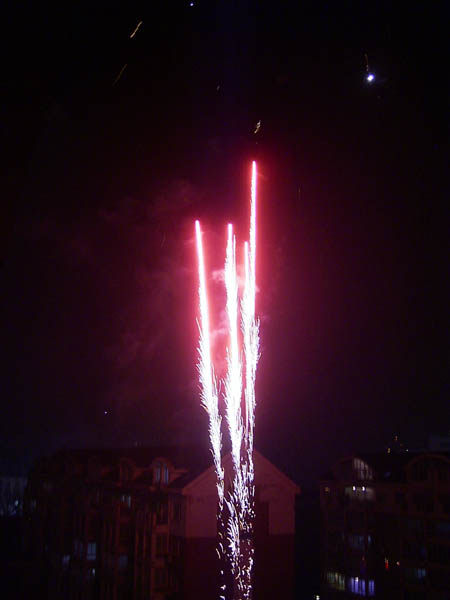 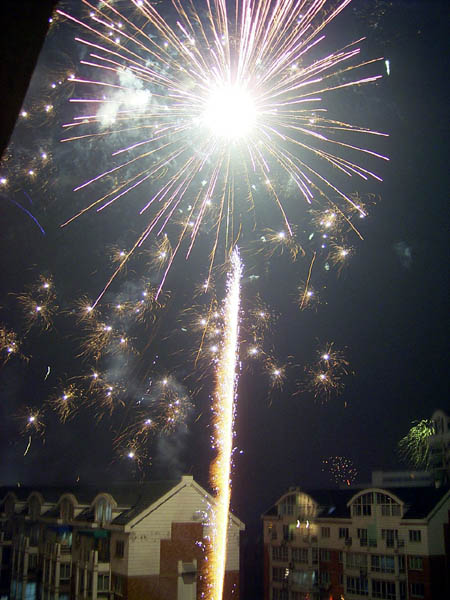 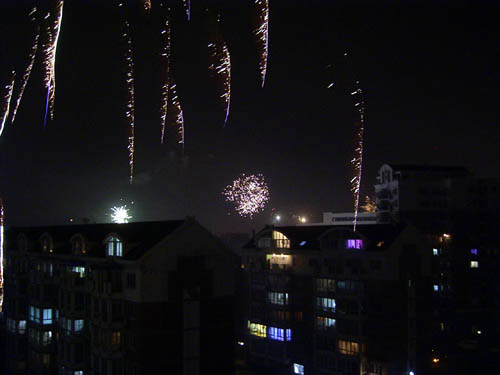 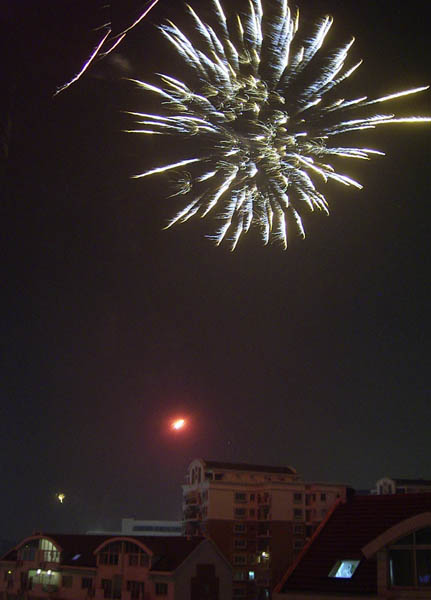 After midnight Matthew and I hit the street to see things first hand, but everything pretty much started to quiet down. As proof to a theory we had about last night being the busiest night of the year for the fire halls and hospitals, a fire truck showed up in Sheng Bin. It took us a bit to figure out what they were on about, as they looked just as confused as we did as to where the problem was, but then we saw the scorched siding on one of the top-floor apartments… no fire… but Iâ€™m sure the landlord will be pissed. Further proof of lax-safety was found a bit earlier when Matthew and I were watching the fireworks out my kitchen window and saw two guys with big brooms running to the back of the building. Going to my back window (living room window) we saw why… the lawn was on fire… like not just a little flame, but the whole lawn! Thankfully they seem to have been able to just sweep up the fire (I have no idea), and even more thankfully, all the apartments are built with very little wood… but I wonder how many families started off the new year with some real crap luck and no longer have a home. 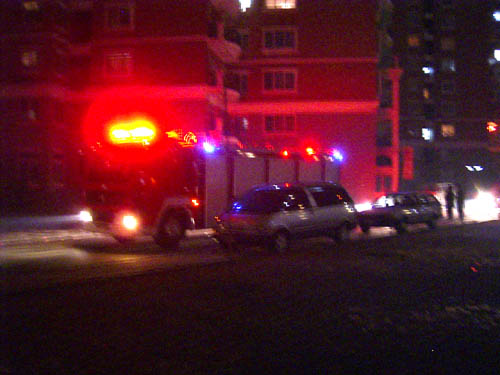 The fire on the lawn and the fire truck…

With everything reasonably quiet, we returned to our apartments and I said goodnight to the new year. So now, the Year of the Rooster has begun (I gave an interesting lesson in slang the other day when one of my adult students referred to this year as ‘The Year of the Cock’). Today I am spending my new yearâ€™s day in typical fashion â€“ Iâ€™ve not showered, Iâ€™ve ate only crap so far and Iâ€™m basically only motivated to watch DVDs. Without family to go spend time with… the ‘holiday’ is a bit boring. However, tomorrow Iâ€™m meeting up with Serena and weâ€™re going into Dalian to watch some fireworks, which should be quite cool. Hopefully some stores will be open as I want to take the opportunity to grab some needed items for my potluck party on Sunday. Iâ€™ve decided to try and find some Western food to cook, for Iâ€™m sure there will be PLENTY of Chinese food here â€“ Iâ€™ve heard rumours that itâ€™s easy enough to get in Dalian, but weâ€™ll see.

NOTE: I’m trying to put together a little video presentation of last night… though my digital camera is crap for video (small and no sound) and I’m not entirely sure if I’ll be able to stitch it together… but check back.