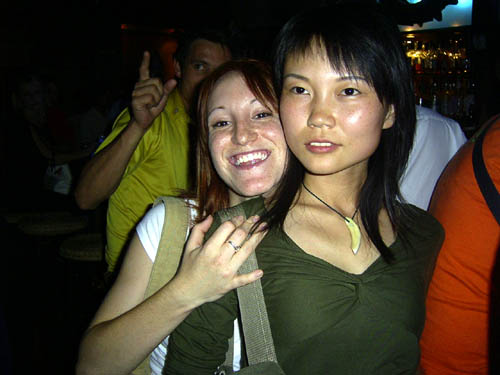 “A good traveller has no fixed plan and is not intent on arriving.” – Lao Zi (è€å­)

So, my mother has made it clear that perhaps a bit more information about Maggie is needed – and I guess that’s fair, as I’ve only ever dropped hints on here about her and suddenly I’ve decided to change my long planned plans to stay for her.

Anyway, enough of all that. Basically she’s just an amazing girl that I could go on and on and on about here… but even with a Journalism diploma and claims at being a published-professional writer, I find I am at a lost for how to properly put the words in order that would even remotely capture the emotion of it.

Essentially, for any that weren’t paying attention – I met Maggie when I was fresh off the plane and still trying to figure out the pronunciation of xie xie (è°¢è°¢). I tried and failed a countless number of times to muster up some courage to let her know I dug her, and eventually just settled on having a friendship with her – as I had convinced myself that there was little point to confess my infatuation with her when she had a boyfriend (more of a fiancee really) and the best I could hope would be she would say she felt something for me too, but couldn’t do anything about it.

But then time ran short and I realized that I really needed to stop playing the “guess her reaction” game and just let the cards fall where they would. Truthfully, I guess it had more to do with the fact that I was getting less fearful of having to face a girl daily that had castrated me with her laughter at my pathetic feelings. Yeah – confidence and girls, not my strong point.

The other thing that killed about two months of that time was my relationship with Mandy. Not something I regret in anyway, despite how it ended. However, when I first started being friendly with Mandy I hit a cross-road and had to shit or get off the pot (out of the squat? This is China) with the Maggie thing and for some reason I came to the solid and well-founded decision that telling her how I felt about her was just a vast waste of time. So, I spent more time with Mandy and buried the Maggie thing (I know I know, the girls with ‘M’ thing hasn’t escaped my notice, but I didn’t choose their names…). We all know how the Mandy thing ended, and as much as that put me off girls … I guess it wasn’t significant enough to dissuade me completely – as here I am.

And that’s it. There’s lots of little bits missing, the hours I spent talking to her at school, me finding every opportunity to stumble my way into the reception area just to stare stupidly at her, etc., etc. But really, it’s of little consequence now and she’s waiting for me.